Younghoe Koo: How the Atlanta Falcons kicker overcame the language barrier and was cut to thrive in the NFL 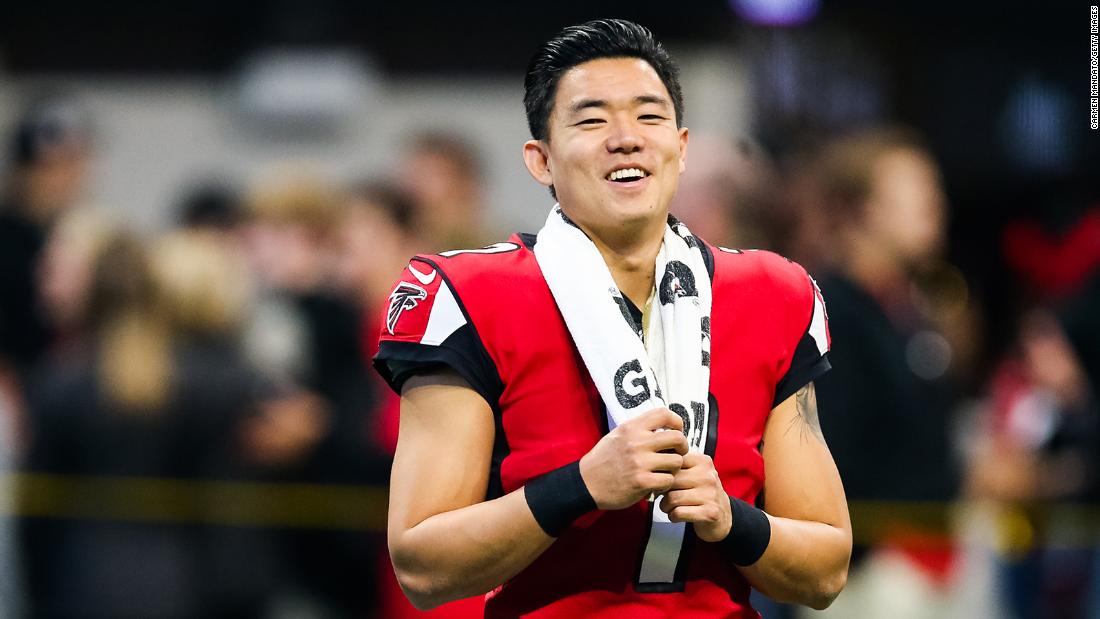 Now Koo is the second-highest paid kicker in the league after signing a five-year contract extension with the Atlanta Falcons earlier this year.

But it hasn’t all been easy for the South Korean native.

Despite a collegiate career with Georgia Southern in which he converted a team-high 88.6% of his field goal attempts and was a finalist for the Lou Groza Award for the nation’s top kicker, Koo was not drafted in 2017 and signed a free agent contract with the Los Angeles Chargers soon after.

He quickly impressed, winning the starting role in pre-season against outgoing kicker Josh Lambo, but a long-term spot in the team proved elusive.

“I felt like I made it my rookie year when I got the job before the first week. I was like, ‘Oh, that’s it, I did it,’ you know? The next four weeks I was cut,” Koo tells CNN Sport Coy’s Thread.

It was that moment early in his career that taught the then 23-year-old rookie about life in the NFL.

“It taught me that it’s never over. You have to compete every day. You have to produce; it’s a production business. That’s what the head coach told me when I was released. It was a great learning experience for me.”

With nowhere to go, Koo was forced to turn to rather familiar surroundings – a place he didn’t think he would ever find himself in.

“When I ran out of money with the Chargers, I went home to my mom and that’s when you’re just waiting for a phone call, waiting for a practice session,” he says. .

Football players, and sports people in general, are particularly conditioned to always have their daily activities planned for them, whether it’s watching movies, meals or training. Without it, Koo lost his sense of direction.

“I guess my football career, like high school, college and then the Chargers, I always had something to do, on a team. You almost feel empty because [when] you wake up, nobody tells you anything,” Koo says.

Connecting with other NFL free agents helped him regain that sense of team spirit and structure that he lacked.

“I learned a lot. I wasn’t the only one going through this. It was almost therapeutic for me to go to training [with] guys who are going through the same thing and we compete but also share our backgrounds,” Koo says.

He credits those moments of early adversity with helping him become an even better professional and student of the game, although he says he still has a lot to learn as his career progresses.

“Coming out of college, I felt like I knew it all, but [in] reality, I didn’t know anything,” says Koo.

“I decided to let go of this ego [and] To ask questions. I wanted to learn, I wanted to see what was wrong, and very soon I realized I was a puppy in this business. I had to keep asking questions. I have a lot to learn and a long way to go, obviously.”

He signed his $24.5 million contract with the Falcons in March, officially making him the league’s second-highest paid kicker in total dollars, behind Baltimore Ravens kicker Justin Tucker in average annual value. according to the NFL.

Koo lived in South Korea until age 12 before moving to the United States to attend sixth grade.

“I grew up playing football for the school team. That was really my main goal. I wasn’t really good at school,” he says.

He describes the transition to the United States as “difficult”, an experience made worse by his lack of English. Koo cites sports as a catalyst for learning the language and making friends in an unfamiliar country.

“I feel like I learned English much faster because I was doing sports,” says Koo. “I was forced to jump in and socialize with different groups of friends and meet different people. It definitely bridged that gap for me.”

Koo first learned about football through his friends, who noticed his footballing talent and wanted him to start or kick off in their matches.

“And that’s when everyone saw the strength in my leg because [of] football, so kicking came naturally to me. That’s when I was asked to sign up for football and I signed up that summer.”

Koo specifically remembers sitting in a car with teammates going to practice one day without even knowing how to communicate with them.

Despite his fear of sounding “stupid”, he managed to come up with a phrase that changed his fortunes.

“I remember just saying ‘I’m bored’ and they were just asking [me] questions like: ‘Now? In the car to practice? I was like, ‘No, no, no, the weekend.’ So that weekend they called me to go out with me.”

As a South Korean immigrant to the United States, Koo says he noticed racism growing up, but chose not to “respond or react to it.” He didn’t take any racist comments to heart, knowing that everyone has their own opinions, valid or invalid.

As for how he now deals with negativity as one of the highest earning kickers in the NFL, Koo compares it to a diet where he chooses which comments he wants to eat and digest. He says his mindset needs to be ‘bulletproof’ when he steps onto the pitch; adversity from outside could hurt his performance.

“Whether it’s racism or adversity, we’ve thrown a ball…we have to go for it and next time we now have to focus on the next shot. It can’t stay with me because it will affect my next kick,” Koo says.

“My father taught me from an early age [that] if you are good enough, your talent speaks for itself,” he adds.

And when the kick is in the air, all that matters is the result.

“You are white, black, Asian or whatever. [The] football does not know who is kicking it. And when the ball flies, they don’t know who kicked it and they just see the results and they see the ball and they’re like, ‘Okay, that kick is good,'” Koo said.

Koo understands the place football can play in the world and what its history can mean for the next generation of Asian athletes looking to play in America’s top league.

“His [something] we talked a lot. It’s a very diverse group of people in that locker room. Everyone comes from different places, backgrounds, families, but we all have a common goal, and we are working on it together and this sacrifice to work hard not only for yourself, [but] for something bigger than you,” Koo recalled.

“I think representation is important because, growing up for me in football, there was nobody who looked like me. It was harder for me to visualize, [if] he does it, I can do it.

“If you look at my story, I didn’t speak English, I didn’t know what football was. I had a hard time saying, ‘What are you doing this weekend?’ I think anyone, if they have a dream, pursue it and work hard, can put a plan in place and pursue it.”