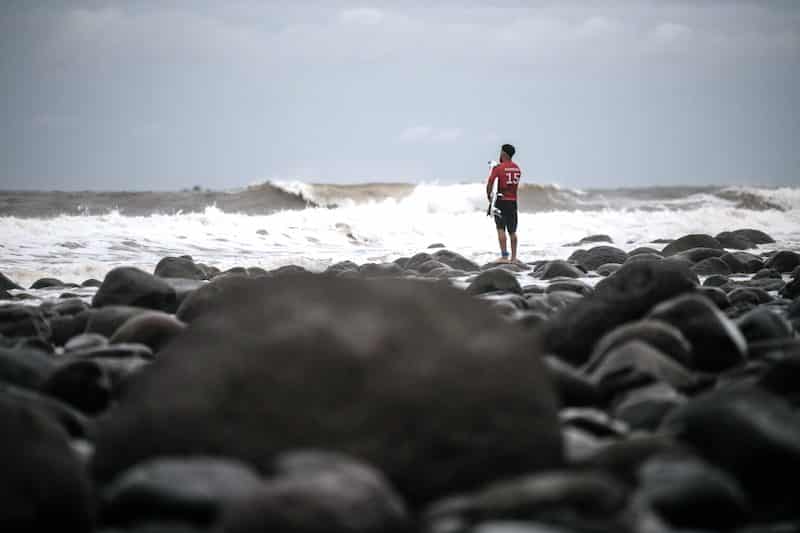 “The end of the playoff round was brutal. Nat Young sat sadly in murky water for a full half hour in a loss to Jordy without a wave to ride.”

Today I taught fourteen year olds a dramatic monologue about a disgruntled teenager who takes a bread knife down the street and stab someone.

It is a poem that was erased from textbooks and banned in schools in England at a time when knife crime was on the rise.

It seems unlikely that knife-wielding teenagers would have plunged blades with verses in mind, but there you go.

The opening line is unequivocal.

“Today I’m going to kill something. Anything.”

It’s sinister. The character isn’t exceptional, and that’s the point. He may be sitting next to you on the bus, watching you momentarily as your shoulders bump into the street, or staring sullenly at you from a doorway.

The fact is, life can be shit, for all of us. It is how we react that is important.

We could choose darkness. Choose to blame everyone and everything. Condemning the world around us. It is not my fault…

Or, we change our perspective.

We can be like Jack Robinson or Griffin Colapinto and master our minds, understand that the kingdom is within.

Or we could entrust our destiny to a higher power, like Filipe or Gabriel, to have faith.

I don’t believe in anything in particular, and I don’t control my mind, but I know that sometimes I have to change my point of view. After the first innings today, I had noticed a few negative jokes and acerbic barbs. But it was too easy. It’s too easy to dismiss everything – waves, Kaipo, judgment, comment, Kaipo…etc, etc, as usual.

But allow me one, before I give up.

We get it, Mitch. You speak Spanish, along with about a billion other people.

He’s like a kid I once taught who wanted to show the class some magic tricks he was learning. It was a low-ability class (it’s not all poetry and Good Will Hunting, you know) and it was poor souls. And so I said yes to please him and kill some time. Bless him. It was awful, god awful. Neither magic nor tricks. But we made the mistake of ummmming and awwwwing anyway, pretending to be amazed, like he was David Blaine. After that, the poor bastard wanted to do magic every day, and I didn’t have the heart to say no. And so the end of each lesson was pretending to be seduced by more and more elaborate, more and more ridiculous and endless shitty tricks.

This morning we went through the men’s playoffs and then the round of 16 with overlapping series. The waves were pretty spooky – if you’ll allow me a bit of realness – and I wondered if that was debatable, regardless if it suited some overlapping waves. But Miley-Dyer’s hand had been forced. With little time and a lot to do, we had to walk.

The end of the elimination round was brutal. Nat Young sat sadly in murky water for a full half hour in a loss to Jordy with no wave to surf.

Miguel Pupo, a surfer who has been superb all season, banged his board in fury as the horn signaled his loss to Jake Marshall. Until the last seconds, all he had was a 2.97 and a 0.90.

Meanwhile, Shannon and Laura were chirping happily in the background as if we were all having a wonderful time.

“So so questionable,” Laura said.

Jordy was gracious and honest during his post-heating interview. “Luck,” he said, when asked how he won. Salazar trotted out the J-Bay comparison, clearly expecting Jordy to stick to the script. “Somebody’s gotta get slapped every time they call that J-Bay,” he snapped, forehand reversing the insane comparison into Mitchell’s taco.

Jack Robinson looked squarely beaten by Jackson Baker for the majority of their round of 16. Oddly, waves appeared and Baker picked the best ones, building a solid and deserved lead.

But with four minutes on the clock, Robinson found a wave and rocked it like a terrier with a rat for an 8.93. The aggression was startling. It’s the most impressed I’ve been with Robinson in three compositions. The camera cut to Julia on the beach, gesticulating wildly. We couldn’t hear what she was saying, but I imagine it was something like “Any one of you move, you fucking assholes, and I’ll execute every last fucking one of you.” you !”

Jack sat in the water, calmed down, then turned around and paddled out. There’s something vaguely psychopathic about his behavior, like he’s afraid of losing control. He surfs like he’s possessed, but talks like he’s half asleep.

Robinson and the other key players (plus Callum Robson) reached the quarters, and it was lucky because Punta Roca finally showed some of the quality we’ve heard about.

Medina vs Robinson was the heat everyone wanted to see. Jack’s board snapped on his first top turn, sheared through the lip. He came out quickly, but didn’t have the rhythm. The waves were better but not spectacular at this point. Really, Medina dominated even though he again looked chronically stressed with low sixes.

In the post-warmup interview, Laura asked him if he pushed Jack on purpose for the final set. “I’m just testing these guys,” Medina replied, like a grinning assassin.

Some of the neighborhoods were still in lulls, but it was incredulous to see Filipe stand tall and gaze up long double-ceilinged walls before lip-smashing at every turn, when just hours before Carissa Moore could ‘t find a wave in her quarter-final loss to Caroline Marks. A couple before that had seemed impossible to surf.

Filipe dominated against Robson, as you would expect on top straight waves. He was never threatened, always in control. He seems more poised than ever.

Both Kanoa and Colapinto had great heat totals. Either would have been a worthy winner. Kanoa had the wave to steal it at the end, if he hadn’t run into his nearest one.

Griffin will face Medina in the semifinals. He can’t wait to be there. He feels like he was just a kid the last time he surfed against Medina. “Now I’m becoming a man,” he said.

He’ll have to be more than a man to progress in that one.

Ethan and Italo fought a great run to end the day. The waves were nothing short of pumping and perfect, although a little soft towards the end.

Italo took the win, trading 8s with Ewing. So much the better, in the name of justice. Ethan’s scores weren’t so inflated that Italo’s were crushed. He continues to be undermined by the judges. His 8.80 was the highest score of the round, but still low. What else could he have done with that wave on his lapel?

Today was far from perfect, but there were some worthwhile glimpses. Really that’s all we can hope for.

I found myself appreciating imperfection, even savoring it. When the good waves came, I enjoyed them all the more.

“Why is everything we study about death, pain and tragedy, sir?” a student asked today, precisely.

It’s because happiness is the dullest state you can find yourself in.

They help us create.

They help us connect, to know that others are hurting too.

We learn to appreciate what we have. We see silk purses in the sow’s ears.

Above all: without sorrow, how would you recognize joy?

And if you only know happiness, what about ecstasy?

It seems unlikely there will be an ecstatic finish in El Salvador tomorrow, but that’s okay. There will be other days. It can always get better.

This is what keeps us going.