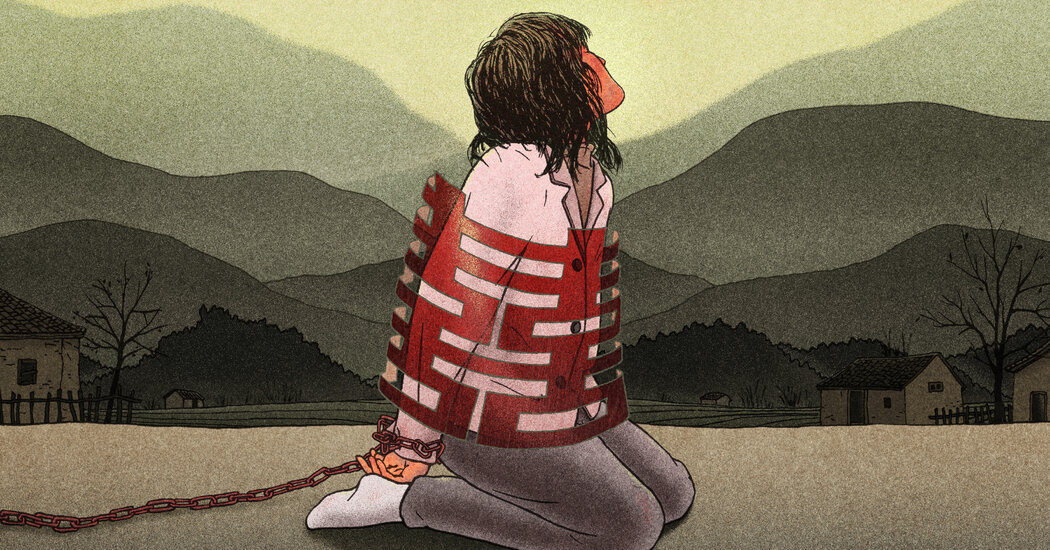 The Chinese government faces a dilemma: how to convince its people that what it said about a chained woman is true.

Since a short video of the woman chained in a shack with no door went viral in late January, with the Chinese public taking the case into their own hands to find out who she is, if she is a victim of human trafficking and why the apparently mentally ill woman got eight children.

The public believed they could not trust a government that was not truthful about its identity and was acquiescent when it came to forced marriages involving human trafficking.

On Chinese social media, users unearthed a marriage certificate with a photo of a woman identified by the government as the chained woman but who looked different from her. They dug into court documents that showed the area where she lived had a dark history of human trafficking. Long-time retired investigative journalists traveled to a village deep in the mountains, knocking on every door, to verify the government’s claim that she grew up there.

“No social event has ever had the same effect on netizens as the chained woman,” wrote a user called “Xudiqiuziyuanku” on social media platform WeChat. “It forced us to become detectives, analysts, AI image painting technicians, data mining engineers and Sherlock Holmes.”

The Chinese public staged a rare uprising online because they felt the government had failed to prioritize women’s personal safety, despite its claims that women “own half the sky”.

This is one of the biggest credibility challenges Beijing has faced in recent years. The chained woman has become a symbol of injustice that has united liberals as well as nationalist digital warriors and apolitical moderates. Many of them fear that the chain around his neck, literally and figuratively, will fall on them or their loved ones.

The chained woman’s video has led to something of a #MeToo movement on the Chinese internet, in which many people have come forward to share stories of mothers, daughters, sisters and classmates who have been abducted or all just disappeared.

“We are not spectators, but survivors,” goes a popular joke on social media. “We are not saving the chained woman. Instead, she saves us.

The top three hashtags about the chained woman on Twitter-like social media platform Weibo have racked up more than 10 billion views, rivaling those about the Beijing Winter Olympics, which were heavily promoted by Weibo and official media. And the topic continues to capture netizens’ attention amid the Russian invasion of Ukraine.

Even some of Beijing’s most dedicated supporters expressed sympathy for the woman. They also fear that the poorly managed crisis will challenge the authority of the government. “Politically, this is tragic,” wrote Hu Xijin, retired editor of the official Global Times, in February. “It is a clear warning that the credibility of the government has been significantly weakened.”

The outpouring resembles that of 2020 following the death of a Chinese doctor who was reprimanded by police for sharing his knowledge of the coronavirus outbreak. In this highly censored society, it is rare for ordinary Chinese people to express opinions critical of the government. Many people are willing to talk because they feel vulnerable – and guilty for not already being aware of the issues.

“If justice cannot be served in this case,” Zhao Jianfeng, an internet entrepreneur in Hangzhou, wrote on his WeChat timeline, “this place will fall into a very long and very dark night.”

“I felt that if this case is not solved,” wrote a science writer with Weibo handle @Luka, “happiness will be superficial and many things will be meaningless.”

Hundreds of graduates from some of China’s top universities have signed petitions urging the central government to investigate the matter.

Several bookstores have set up sections of books that might help readers understand the case, including Pierre Bourdieu’s ‘Male Domination’, Rebecca Solnit’s ‘Men Explain Things to Me’ and ‘Jane Doe January: My Twenty -Year Search for Truth and Justice” by Emily Winslow.

Lawyers, scholars, former journalists and many bloggers have helped give the Chinese public a crash course in human trafficking, forced marriage and population statistics. They have resurfaced books, films, documentaries and reports about abducted women.

The public learned that the Chinese legal system was set up to protect men who paid for abducted women. Buying a woman could put someone in jail for up to three years, a leading lawyer said in a viral video, the same as the sentence for buying 20 frogs. When victims of human trafficking filed for divorce, the courts often ruled against them, saying that having stayed with the men was sufficient proof of a good marriage.

They learned how easily even the most educated women could become victims of human trafficking.

Some of the stories uncovered, based on official media reports and court documents, touched on China’s middle class: A Shanghai graduate student was abducted on a field trip and sold to a stooped man. She was rescued after 71 days. A 13-year-old girl in Beijing was kidnapped on her way to school and sold to a man who constantly beat her. She had a son at 15 and was only able to escape when she was 19. A young woman from Hangzhou was abducted on a business trip and spent the next two decades in a remote village. She was saved after her son went to college and informed his parents.

But a large majority of human trafficking victims came from poorer corners of China. Few were rescued. It was almost impossible for the women to escape as entire villages watched them. They would be beaten and locked up after being caught.

Court documents showed that the sale and resale of women with mental illness was common in parts of China.

The more people learned about what victims of human trafficking had been through, the more enraged they became at the government’s conflicting statements about the chained woman. They wanted to know who she was, how the government would prosecute those responsible for her miserable conditions, and what it would do to help many other women like her.

The shackled woman, 44, led a tragic life, according to a statement from the Jiangsu provincial government issued on February 23, the fifth since late January.

Named Xiaohuamei (little plum blossom), she grew up in a remote village in a southwestern province, Yunnan. She showed signs of mental illness after being divorced at age 20. In 1998, a couple smuggled her to the eastern province of Jiangsu. She was sold twice in one year, the second time to the family of a man named Dong Zhimin.

She and Mr. Dong had a son in 1999, according to the statement. Then between 2011 and 2020, she gave birth to seven more children. After having the third child, her mental illness deteriorated. Since 2017, Mr. Dong had tied her up with ropes or shackled her neck when she was sick.

Xiaohuamei was diagnosed with schizophrenia and was hospitalized, the statement said.

Mr. Dong was accused of abusing a family member. The couple who smuggled him were charged with human trafficking and 17 low-level local officials were disciplined.

But many people remain skeptical or have reservations about the statement. It was hard to trust him, they said, because there was only one source of information – the government – ​​and reporters from relatively independent media had no right to investigate.

They were disappointed that Mr. Dong was only charged with abuse, instead of rape and false imprisonment, and that the woman was not given the opportunity to speak for herself. They disputed many facts presented by the government, and many still want to know how and when the woman got married and especially if she is the woman on the marriage certificate.

The government said Xiaohuamei did not look like the woman on the marriage certificate because she was now older and had lost most of her teeth. But some social media users were skeptical. The changes seemed too drastic.

The public is very disappointed with the government’s lack of a serious plan to eradicate human trafficking and forced marriage. Instead, he seems more interested in taking back control of the narrative.

Two women who attempted to visit the chained woman were arrested and beaten by local police in February. Their social media posts and accounts have been deleted. Some social media users who shared their posts said they received calls from the police.

Bookstores have been ordered to remove their special sections. Teachers were warned not to discuss Xiaohuamei’s case with their students.

The government didn’t seem to care if he was truthful or not, many people said online. Government officials promoted the version of the truth that they wanted the public to believe.

Liu Yi contributed to the research.