Who actually votes in San Francisco? These graphs show detailed data on 500,000 voters 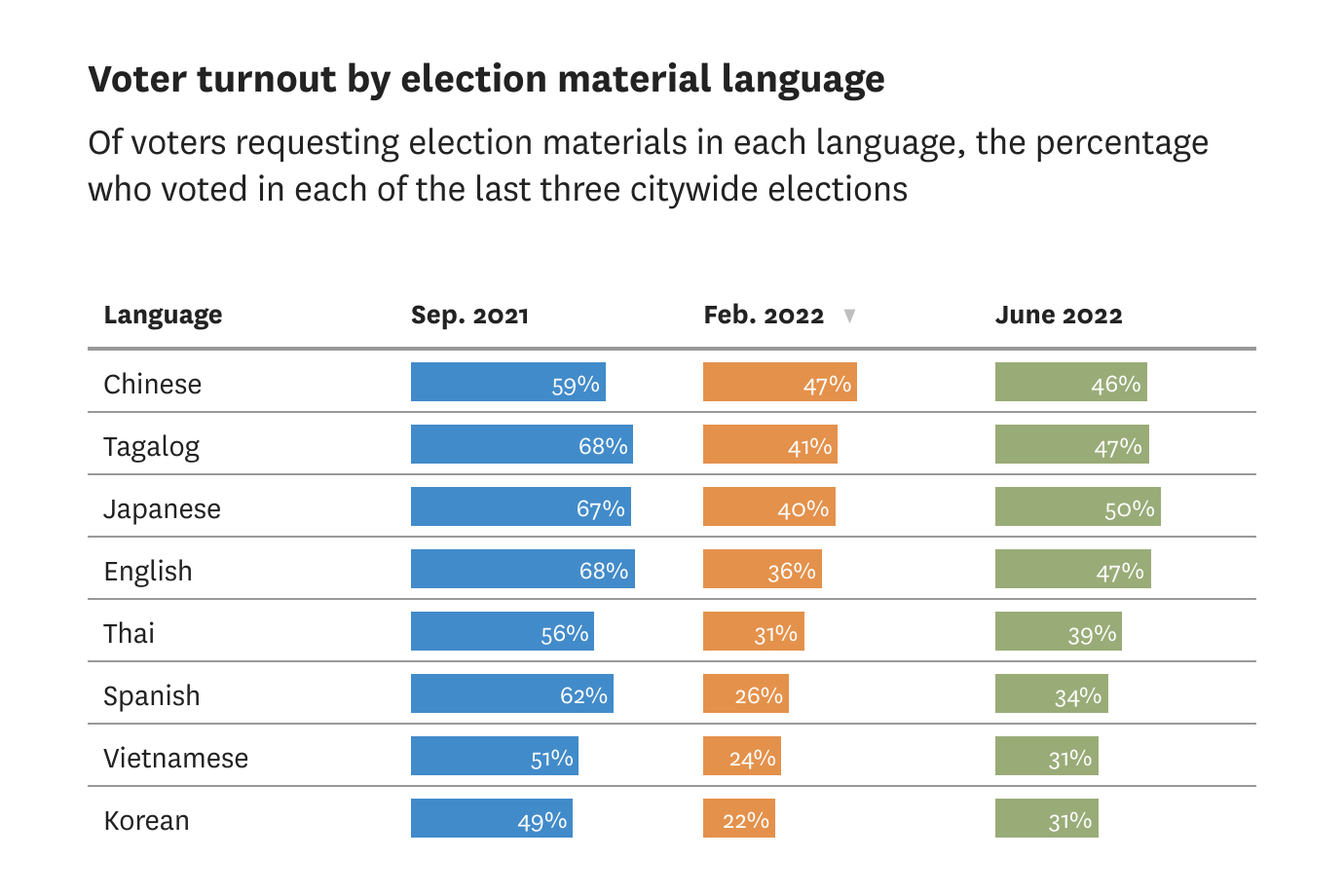 San Francisco politics are changing. The last two municipal elections have resulted in the recall of four controversial civil servants. But who actually voted in these elections, and how was the electorate different from previous elections?

According to a Chronicle analysis of voter registration data, the SF electorate in the last three citywide elections varied slightly in terms of voter age, language preference and registered party. For example, voters who are older and whose primary language is Chinese were more likely to vote in the February 2022 school board recall than in the other two elections.

The Chronicle obtained voter registration data from nearly 500,000 active SF voters. The dataset, provided by the SF Department of Elections, includes information on each person’s age, language preference, registered party and whether or not they voted in the last three municipal elections – the primary. June 2022 School Board Recall, February 2022 School Board Recall, and September 2021 Recall. Newsom Recall. To account for changes in the voting population between elections, we only analyzed data on the approximately 477,000 voters who registered before the September elections.

Almost 3 in 10 registered voters (29%) voted in all three elections, while a similar percentage (27%) did not vote in any of the three. Two in 10 have voted in two elections, and nearly a quarter have voted in only one.

Most voters who have participated in a single election have voted in Newsom’s recall. For 20% of all voters, the September election was the only one (of three) in which they voted. The same was true for 3% of voters for the June primary and only 1% for the February election. This trend follows the differences in overall participation – 68% participated in the Newsom race, compared to 46% in June and 36% in February.

In all three elections, older San Franciscans were much more likely to vote than their younger counterparts, and turnout was consistently lowest in the youngest age group, 18–29. The data also shows that elections with low turnout tend to have larger differences. rates between older and younger voters.

This relatively large Chinese-language turnout in February resulted in a 2-3 percentage point shift in its electoral makeup. While those who received documents in Chinese made up 5-6% of all voters in the June and September elections, they made up 8% of the school board’s recall electorate. Meanwhile, the share of voters requesting documents in English was two percentage points lower in February than in other elections.

While a two-point difference is not enough to change the election results, other data points to the crucial role that Chinese speakers and other Asian Americans played in the run-up to the election – about a third of 80,000 signatures collected to trigger the recall were from Asian Americans.

Still, Asians and Pacific Islanders make up about a third of SF residents, while every school board member was remembered by nearly 70% of voters; therefore, many more San Franciscans of other ethnicities also voted in favor of the recall.

Turnout by registered party also differs slightly by election. Registered Republicans, who make up 7% of registered voters, saw voter turnout 1 to 2 percentage points higher in the February and June elections than registered Democrats. In the September recall, however, Democrats’ turnout was seven points higher than Republicans’.