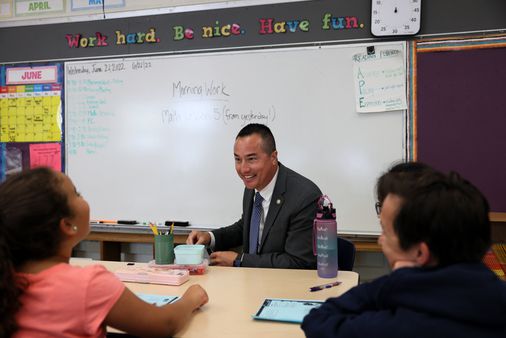 “I’m not the kind of person to just say ‘hey, I feel like I’m ready to be superintendent, I might as well apply for any job,'” Welch said in a public interview Friday after noon to become Boston’s next superintendent.

“I would only lead a district that I am emotionally and physically connected to,” he said. “BPS is that neighborhood. Boston is that city.

Welch, Boston Public Schools regional superintendent, was the second of two superintendent finalists to be interviewed publicly this week. Welch has repeatedly emphasized his ability to hit the ground immediately on July 1.

The school committee is due to choose the next district leader on Wednesday.

During Friday’s talks, Welch was asked how he will raise the voices of people of color in the district and ensure they can trust his leadership, and how he will continue the anti-racism and equity work of the outgoing superintendent. Brenda Cassellius started during her time in the district.

Welch recalls the first time he visited East Boston seven years ago, meeting community members who mostly spoke Spanish and heard from them what was working or not working. Based on those early conversations, he said, the district was able to change grade configurations in East Boston that previously drove families out of the area.

“I believe raising all the voices is one of the most important things,” Welch said. “A leader can’t do their job if they don’t listen to people and really understand what people want for their children and what they want for their school communities.”

Here are some other highlights from Welch’s interviews:

Welch described extensive experience working with multilingual learners, including as an ESL teacher and principal at a school for majority English learners in Los Angeles, as well as network superintendent for the predominantly Latin East region of Los Angeles. Boston and in building the bilingual program at the Mario Umana Academy.

Welch described the delicate process of converting a school to a bilingual school, with veteran teachers having to move to other schools as the program expanded to make room for other bilingual educators. He also spoke about methods of recruiting multilingual teachers, including hiring multilingual paraprofessionals and helping them get their teaching certificates.

But it can have a huge impact, Welch said, referring to a student he had who was a “math superstar” who was able to thrive after joining the general population for math lessons.

Drawing on his experience closing Edwards Middle School in Charlestown, Welch stressed the importance of planning ahead when a district decides to close a school, what the next superintendent might have to do then. that the district is struggling with aging buildings and declining enrollment. Giving enough notice allows families — and staff — to plan ahead for any closures.

Welch also said the district should learn from other cities that have had to close schools in recent years and that it will be easier for families to come to terms with the closures if they see the district moving forward with new ones. buildings with “magnificent auditoriums”.

Welch said he had already worked with families and students at an early age to create a plan for what graduation would be like and that he felt there needed to be strong communication and continues to help families understand the value of education and the importance of earning a degree, which could lead to increased graduation rate.

“When some of our students graduate, especially from Boston public schools, they may be the first student to enroll in college in their family,” Welch added. “It just takes additional guidance and support beyond the years we have with them and in Boston Public Schools.”

Welch said there is a tremendous opportunity to expand Madison Park Technical Vocational High School. He highlighted his time as a teacher and administrator in Los Angeles, where the district had schools open until 10 p.m., saying he would like to explore such options for Boston students.

“If we can’t get students to the school we promised, we are actually contributing to chronic absences … which we know have adverse effects on our students.

Unreliable transportation also negatively affects high school students, he said, as some may have additional responsibilities outside of school.

“I don’t want to be the school superintendent who has to return $100 million in ESSER investments to the federal government,” Welch said, noting that the district is about to spend its $400 million in federal funds. related to the pandemic by 2024. .

He added that the money was for students most affected by the pandemic and should be in the hands of “the people closest to the schools”, who he said would be the headteachers. Welch said he would like to get the money to directors as quickly as possible so they can make those decisions on how best to use the funds.

Welch said he would like to tap more resources through higher education institutions and engage with future educators. not only when they graduate from college, but also as early as high school.

“This year we got a huge grant from the state…where we were able to pay high school kids $15 an hour to work in schools to introduce them to classroom teaching, hopefully leading them , to jobs with us,” Welch said, adding that he’s benefited in Region 1.