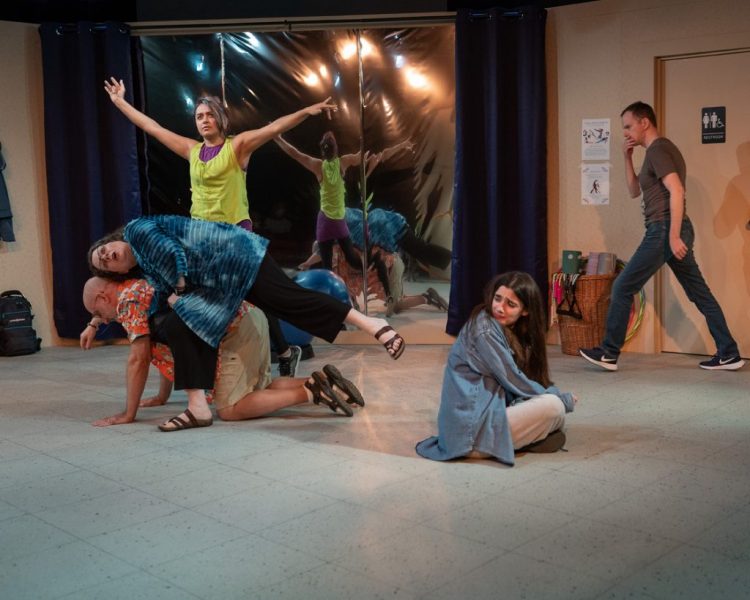 The cast of “Circle Mirror Transformation”. Photo by Harvey Levine.

Co-produced by Bill Hurlbut and Tristan Poje and directed by Rob Gorman, Annie Baker’s “Circle Mirror Transformation” follows a six-week acting class in a small town in Vermont. The class is small – only five members including the instructor, Marty (Mara Rosenberg) and her husband, James (David Samuels) who have been married for several years. Also in the class is Schultz (David Dieudonné), recently divorced, and he seems to have joined the class in hopes of meeting someone. He actually meets Theresa (Diana Valle), a young actress who recently moved to the New York area after a broken romance. Lauren (Davis Leonard) is a sixteen-year-old who wants to learn acting so she can play the lead role in her high school’s “West Side Story” production.

The journey and the feelings of the characters are presented through “acting exercises” that Marty has imagined. What starts out as a theatrical training becomes more of a series of psychodrama, therapy sessions. The characters expose a lot about themselves that is beyond the leader’s ability to deal with these revelations.

Some of these “exercises” are commonly used in acting classes and in many improv theatres. To quote young Lauren, “When do we do real acting?” At times, the playwright seems to mock many of these theatrical conventions. At other times, Baker seems to extol their virtues. Simply put, is Brando better trained than Olivier?

As we try to decide, we also learn about the lives of these five people. Their representations by this beautiful ensemble are at the heart of the piece. The actors move the plot forward and we focus on their interactions. It is difficult, in a production like this, to choose an exceptional performance: each performer has contributed to creating an ensemble.

Rob Gorman’s direction seems to focus on the drama of the five characters’ lives rather than the more satirical parts of the story. The interaction between Mary and James, Schultz and Theresa, and later, James and Theresa, is dominant.

Joy Wyne’s setting reflects the playwright’s conception of a windowless room where the characters act out their lives for an hour at a time. The lighting design by Steve Deming completes the whole thing nicely. Adam Parker’s sound design, along with Deming’s lighting, helps fill in the quiet interludes between scenes. Jennifer Morrissey has some very smart costume designs that help create seamless weather shifts as one day’s session quickly shifts into another.