The disengagement from the LAC was a boon for Xi. But the Chinese media does not tell people that 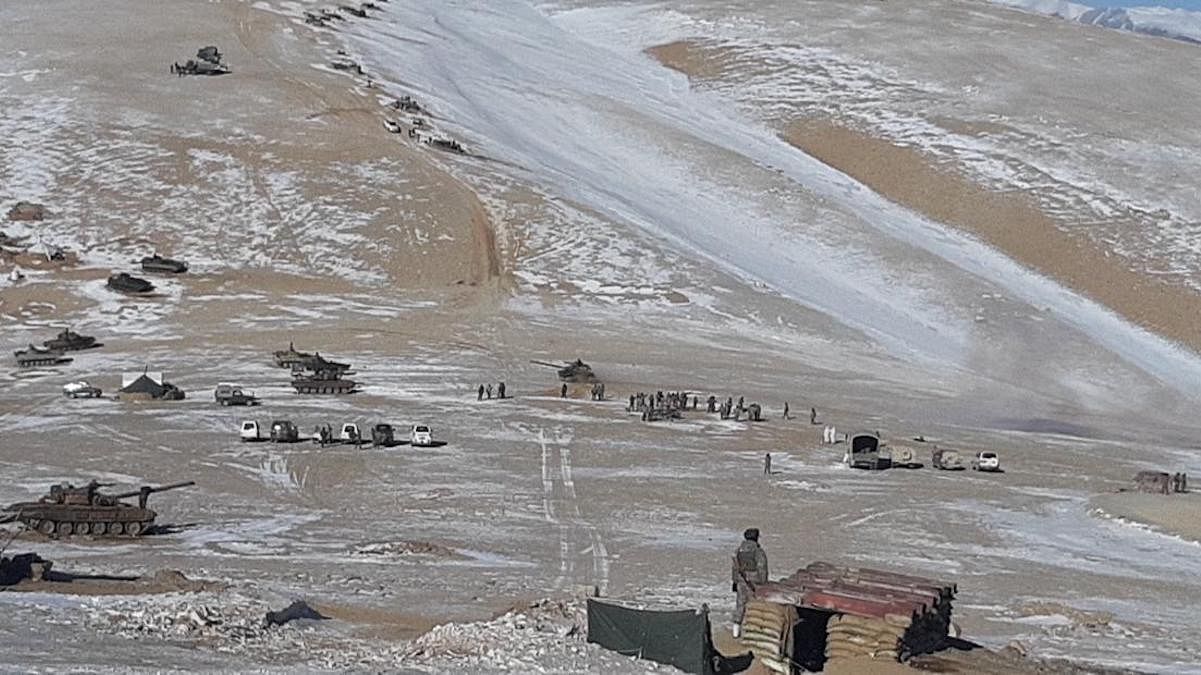 IIndia and China begin their disengagement at Patrol Point 15 in the Gogra-Hotsprings area. Rumors are swirling about President Xi Jinping’s planned visit to Central Asia. Chinese politician Li Zhanshu extends his support for Russia’s war in Ukraine. China celebrates the Mid-Autumn Festival. Chinascope brings you the latest developments in Chinese foreign affairs and society for the past week.

China over the week

In a surprising development, India and China have announced a disengagement at the Line of Actual Control (LAC) in the Gogra-Hotsprings area. The two nations issued a joint statement on September 9. The process will be completed by September 12.

The statement was first released by India’s Ministry of External Affairs (MEA) and Ministry of Defense (MoD) on September 8. The following day, a statement appeared on the People’s Liberation Army (PLA) English language website, and nothing was seen on the Chinese version – until another day later, when a Chinese statement similar has been published.

“On September 8, according to the consensus reached at the 16th round of commander-level talks between China and India, the frontline troops of Chinese and Indian troops in Ganandaban (or Jianan Daban) began to disengage from planned way. This is conducive to maintaining peace and tranquility in the border areas,” said the Chinese version of the statement by the Minister of National Defense.

China DailyThe international edition of reported the news of the engagement.

“With the disengagement, the two sides have found a way to avoid a serious confrontation in the future, experts said, adding that it precedes an important Shanghai Cooperation Organization summit,” China Daily reported.

Chinese state media reported official statements from the PLA and the Chinese Foreign Ministry in English, but there were few reports in Chinese. The disengagement didn’t even trend on popular Chinese social media platform Sina Weibo.

“According to the consensus reached at the 16th round of China-India corps commanders’ level meetings, Chinese and Indian troops in the Jianan Daban area began to disengage on September 8. This is the result of several rounds of talks over a period of time between the two sides’ diplomatic and military establishments at different levels. It is conducive to peace and tranquility in the border areas,” Mao Ning said in his response.

While news channels in India called the disengagement a breakthrough, other areas where the PLA continues to be deployed have yet to disengage. There has been no progress on disengagement in the still highly contested areas of Demchok and Depsang.

Many pundits have said Beijing wants the upcoming SCO in Uzbekistan to go smoothly. Therefore, the disengagement in the Gogra-Hotsprings area was a boon that China’s political leaders had to bite on. The Print’s editor, Shekhar Gupta, addressed the disengagement in his latest CutTheClutter program on YouTube.

So what is happening in Tashkent, and why is it related to the disengagement?

After rumors of Xi’s visit to Saudi Arabia died down, new talk emerged that the Chinese president was making his first visit to Kazakhstan since Covid. So far, the Russian News Agency Interfax and the Kazakh Foreign Ministry said Xi was due to visit the capital, Nur-Sultan, on Wednesday. We have also heard that Xi will travel to Samarkand, Uzbekistan, after Kazakhstan, where he will attend the SCO summit later in the week. Chinese state media has yet to confirm Xi’s itinerary to Central Asia, which is not strange, as visits by top leaders can be fully confirmed a day before the actual trip.

Xi’s visit to Central Asia has significant implications for Indo-China relations with the possibility of a face-to-face meeting with Prime Minister Narendra Modi. If Xi travels, he is also expected to be face-to-face with Russian President Vladimir Putin, a first since Russia launched the war in Ukraine. Several sources claim that Xi will visit Nur-Sultan and Samarkand, so it seems very likely that these trips will continue.

Xi’s visit will also impact China’s Covid travel restrictions, as many Chinese have not left the mainland since the start of the pandemic, and the government has discouraged them from planning international trips.

Read also : China watchers are on the rise in India – from government officials to academics to the general public

Meanwhile, Li Zhanshu, a member of the Politburo Standing Committee of the Communist Party of China (CPC) and China’s third most powerful politician, has completed his tour of Russia.

“We see the United States and its NATO allies expanding their presence near Russian borders, seriously threatening national security and the lives of Russian citizens. We fully understand the need for all measures taken by Russia aimed at protecting its core interests, we are providing assistance,” Li Zhanshu said in Moscow.

Li was in Moscow to attend the 7e Eastern Economic Forum, which was part of its 11-day tour of Russia, Mongolia, Nepal and South Korea. His speech in Moscow was titled “Advancing the Process of Global Multipolarization and Opening a New Chapter in Regional Cooperation.”

“We firmly believe that under the leadership of President Xi Jinping and President Putin, China-Russia relations in the new era will continue to reach new heights, and China and Russia will definitely be able to follow a path of development that suits their own country conditions,” reports People’s Daily, citing Xi’s remarks.

Nepalese media reported that Li may travel to Kathmandu on September 12 as part of the next leg of his tour. We have no confirmation of his plans from Chinese state media.

Chinese politicians are traveling again after two years without international travel due to the pandemic. It is a sign that Xi feels confident about his power within the CCP. We have other evidence to confirm Xi’s rise in status before the 20e Party Congress. The Politburo of the CPC Central Committee held a meeting on Sept. 9 to propose an amendment to China’s constitution that would further elevate Xi’s status by enshrining his political philosophy as a unified ideology, according to Xinhua News Agency.

On September 10, people in mainland China, Taiwan and Hong Kong celebrated the Mid-Autumn Festival, also known as the Moon Festival. A notable aspect of the festival is the worship of the moon, which is tied to the idea of ​​rejuvenation and family reunion. The Chinese name for India, 印度 yindu, comes from the Sanskrit name of the moon. Is China signaling a new approach to India at this festival? We will have to wait and find out.

India does not yet believe in these signs of reconciliation. Indian Army Chief General Manoj Pande was in Ladakh for a two-day visit to witness the army’s Parvat Prahar exercise and take a disengagement rod.

Read also : The CCP sets the date to “elect” Xi Jinping for a third term. And Chinese bloggers praise India

China in the world news

We often hear about regional tensions between Japan and China over the PLA’s actions in the South China Sea and the Taiwan Strait. But China’s new geopolitical role in Asia has a side effect on the Russian-Japanese territorial dispute.

“Japan will continue to monitor the movements of these vessels with great concern and will take all possible measures to carry out warning and surveillance activities in the waters surrounding Japan,” said Hirokazu Matsuno, Japan’s chief cabinet secretary.

Japan has protested against Russian military exercises in two of the four disputed islands in the Kuril chain north of the northernmost island of Hokkaido, controlled by Tokyo. On Saturday, six Russian and Chinese ships were seen firing machine guns into the Sea of ​​Japan about 190 kilometers west of Cape Kamui in Hokkaido.

Meanwhile, Japan and the United States plan to host a summit between Prime Minister Fumio Kishida and President Joe Biden in New York around September 20 to discuss the security situation in East Asia. The summit will have a strong focus on China, Reuters reported.

To read this week

Commerce Minister Piyush Goyal has announced that India will withdraw from the trade component of the Indo-Pacific Economic Framework (IPEF). The hashtag “India abandons participation in Indo-Pacific economic trade talks” was trending on Sina Weibo.

Social media users and bloggers hailed India’s move and pointed out that the US strategy to contain China was “failing”.

“The US ’empty-gloved white wolf’ is frustrated: India is bluntly declaring that it is not profitable to drop its participation in the Indo-Pacific trade talks. The Indo-Pacific Economic Framework (IPEF), which the United States wants to build with great fanfare, has just completed a two-day meeting in Los Angeles, but as one of the major Asian powers India said that it had pulled out of trade talks on one of the four pillars,” said a financial blogger with more than a million followers.

The author is a freelance columnist and journalist. He is currently pursuing an MA in International Politics with a focus on China at the School of Oriental and African Studies (SOAS), University of London. He was previously a Chinese media reporter at the BBC World Service. He tweets @aadilbrar. Views are personal.