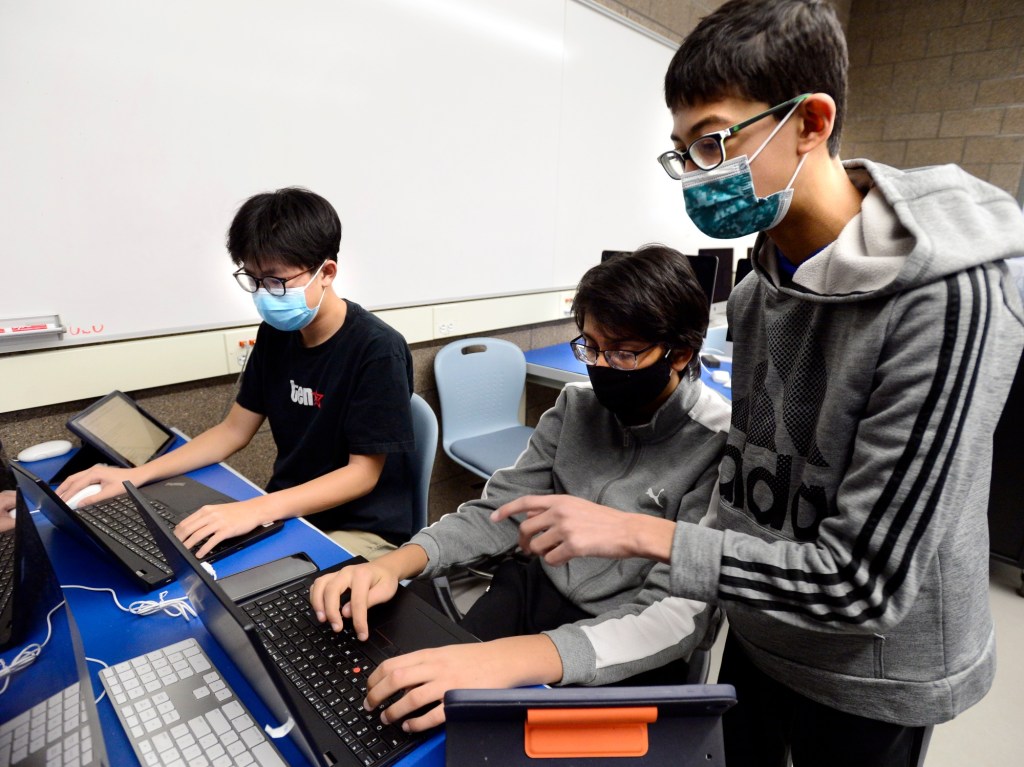 Zachary Schultz was a student at Altona Middle School when his computer science teacher first sparked Schultz’s interest in cybersecurity through a contest called CyberPatriot.

“She just said to our seventh grade class, ‘Hey, that’s really cool stuff; it’s basically teaching you how to protect a computer,” Schultz said. “You can go to the nationals. You can be offered real jobs.

Since then, Schultz, an 18-year-old senior at Silver Creek High School, has not only advanced his knowledge of cybersecurity, but also helped teach the field to his fellow students.

Students eager to learn inspired a district curriculum on cybersecurity and encouraged participation in the CyberPatriot competetion.

In a computer lab at the St. Vrain Schools Innovation Center on Saturday, Schultz sat nearby as his classmates demonstrated their knowledge of protecting virtual networks during the CyberPatriot Semi-Finals. Two of the district’s nine teams made it to the semi-finals at the gold level – the second highest level, platinum being the highest and silver the lowest.

In the CyberPatriot competition, the top 12 teams in the country advance to a national final in Bethesda, Maryland. Teams must upgrade to Platinum to reach this level.

The CyberPatriot program was created by the Air Force Association, a nonprofit military and aerospace education trade association. Students are given a scenario where they must find cybersecurity weaknesses and strengthen a network’s defenses against hackers. Strategies might involve removing programs, creating stronger passwords, and eliminating unnecessary applications. Teams score points by finding and mitigating vulnerabilities.

“Each round they will hide a lot more stuff,” Schultz said. “Like, putting in backdoors (a secret way to allow access to the server) that might be hard to find.”

“They get all the sysadmin skills, that’s for sure,” Cerrone said. “Also, as the rounds progress, it becomes more complex. They have to troubleshoot, research, all these different real-life skills to think on your feet. They do it in a group format, so they have to collaborate.

Cerrone said another skill learned by those involved in the cybersecurity competition is a knack for teaching their peers. Schultz is also part of a tech team that helps teach young people about computer coding and competition.

There were eight freshmen and sophomores from the St. Vrain Valley School District competing on Saturday. In a computer group, Kaushik Chandana, a 15-year-old student from Niwot High School, competed with his team, The Knights.

“Normally we can respond to forensics without too much difficulty,” Kaushik said. “You’re allowed to search for items for CyberPatriot competitions, but a lot of those items are super specific. Anything we’re looking for is just scratching the surface around the true root of the answer, but we can’t exactly pinpoint the answer to the question.

Although the competition can be demanding, students said what they enjoy is working on a solution together. The group went to college together, but is now split up by different high schools.

“It’s just nice to see each other,” Kaushik said.

Interest in cybersecurity is growing, Cerrone said. This is evident not only in the CyberPatriot competition, which now sees thousands of people participating across the country, but also at the local level.

Students in the St. Vrain Valley School District can find introductory cybersecurity courses at the Innovation Center, Mead High School, and Silver Creek High School, as well as several middle schools. A district press release about the competition said that over a three-year period, St. Vrain plans to create a cybersecurity pathway option for students, which will include courses in topics such as ethical hacking, language Python programming in cybersecurity, forensics and operating systems like Linux. The release says students will have the option of taking a stand-alone cybersecurity course or enrolling in the pathway.

This fall, Silver Creek High School launched a Pathways in Technology Early College program in conjunction with Front Range Community College that allows students to earn an associate’s degree in cybersecurity by the time they graduate from high school.

Schultz’s team, Syntax Error, competed at the platinum level but did not reach the semifinals this year. Two years ago, the team qualified to be No. 1 in the state at the gold level.

Schultz hopes his cybersecurity skills will lead to a career as a feather tester — a hacker for hire who finds and exposes cybersecurity weaknesses so defenses can be strengthened.

Cerrone loves seeing how the competition has turned students into teachers and helped them learn invaluable skills that will apply no matter what career path they pursue.

“For me, in real life, the most important skills are having troubleshooting skills, having that perseverance and curiosity,” Cerrone said.