Review of “The Book of Mountains and Seas”: A Creative Look at Creation Myths 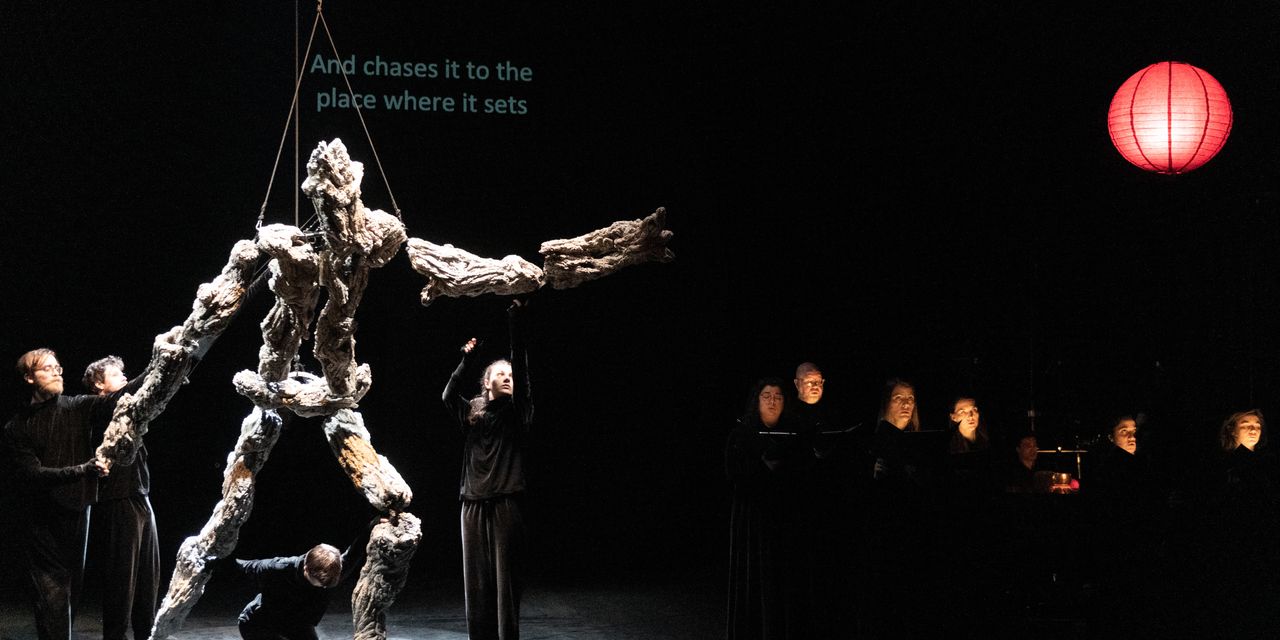 In the 80-minute “Book of Mountains & Seas,” which had its U.S. premiere Tuesday at St. Ann’s Warehouse, composer Huang Ruo and director-designer Basil Twist create the world and destroy it. Their materials are simple: 12 singers and two percussionists accompanied by a few pieces of silk, large pieces of driftwood and paper lanterns manipulated by six puppeteers. The play is based on the eponymous Chinese compilation of myths which was first transcribed in the 4th century BC. the sung text is in Mandarin Chinese and an invented language. Yet the plots of the four myths that the composer has adapted into the libretto receive only the outlines of English surtitles, for the spirit of this haunting evening is atmospheric rather than narrative. “Book of Mountains & Seas” is an exquisite masterpiece of suggestion, an immersive tapestry of sound and image that weaves itself into your consciousness and asserts the interconnectedness of humans and their planet without ever saying it plainly. .

The opera begins in the dark. Only the faces of the singers, members of the Trinity Wall Street Choir, are illuminated; you can barely make out the percussionists (Michael Murphy and John Ostrowski) positioned to the right and left of the stage. The singers, three per type of voice (soprano, alto, tenor, bass), all have independent lines, and the music layers the voices in various combinations to create different textures and sound effects. In the first scene, depicting a creation story about Pan Gu – a being whose body parts eventually become the rocks, rivers, and finally humans of Earth – the solo lines come together to create a hypnotic, song-like texture. with tight harmonic intervals. Here it’s mostly a cappella, with just a few soft gong hits adding another color. The singers part to reveal, in the center of the stage, pieces of driftwood emerging from Pan Gu’s cosmic egg; the glowing lanterns that are his eyes become the sun and the moon.

In the following three scenes, new combinations of all these elements expand the play’s mythical universe. In “The Spirit Bird”, a billowing sheet of silk becomes the ocean; a smaller one, flying above, is the bird, once a princess who drowned. In revenge, she flies back and forth over the ocean, dropping twigs and branches into it. Percussionists exchange bass drum beats, symbolizing the vastness and tides of the ocean, while soprano and alto lines melt above the men’s repeated phrases.

In the third myth, 10 suns rotate around the Earth in turn until the day they decide to go out together. The configuration is extended to a length that seems impossible to sustain, but it works: the suns, paper lanterns, bright orange and carried on long poles, emerge one at a time as high and low voices alternate, with more voice each time. entrance, accompanied by the shimmering hum of a temple bowl and a high-pitched finger cymbal. When all the suns are visible, the ritual atmosphere suddenly evaporates and violence takes over. The drum and marimba pound as the suns dance, change color and even sway menacingly above the audience – their combined heat causes the Earth to burn and die. The archery god then shoots nine, turning them blue and leaving one—with a single bass voice, the cymbal, and the temple bowl—to light up the Earth.

For the final scene, the driftwood pieces are gloriously assembled into the giant Kua Fu, which we see chasing the sun through the Earth, but never catching it. A percussionist hammers out his journey, zigzags around rhythmic, repetitive voices, symbolizing the frustration of his quest. The giant falls from exhaustion and drinks the rivers (of silk) dry. Eventually he dies – pieces of his body are taken away. Once again, we are in the dark, only the illuminated faces of the singers are visible. The titles tell us that the giant’s staff has become a forest of peach blossoms; shiny pieces of paper fall from above; and the final notes, soft solo vocals on a drone, suggest a faint hope of rebirth. The cycle, it implies, will begin again; we are destined to continue creating and destroying the planet.

Poe Saegusa designed the lighting; Lynne Buckson designed the black velvet suits which were perfectly invisible until recall. Huang Ruo directed from the booth behind the audience. This extraordinary piece, co-produced and co-commissioned by Beth Morrison Projects, had its world premiere last November at the Royal Danish Opera House with the Ars Nova Copenhagen Choir. It was supposed to be part of January’s Prototype Festival, which was canceled due to the Covid-19 surge. His resurrection two months later seems to go hand in hand with the fragile hope of his end: Perhaps there is something to be learned from death and devastation.

-Mrs. Waleson writes about opera for the Journal and is the author of “Mad Scenes and Exit Arias: The Death of the New York City Opera and the Future of Opera in America” ​​(Metropolitan).