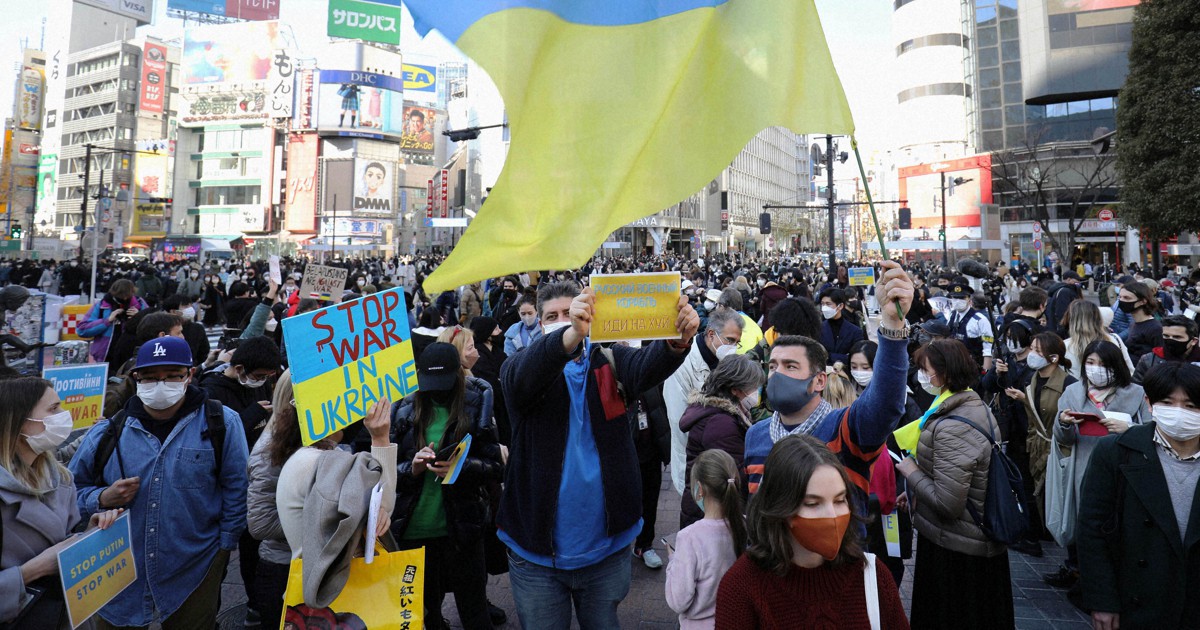 Demonstrations against Russia’s invasion of Ukraine were held across Japan over the weekend of February 26-27 by people of many nationalities.

As a yellow and blue Ukrainian flag flew in the wind, a rally around the Hachiko dog statue in Tokyo’s Shibuya district began shortly after noon on February 26. At one point, the square where the famous dog statue stands was packed with people, including Japanese people. people and families.

Tomo Tanaka, 24, who has been to Ukraine several times and has friends there, held up a printed email he had received from a friend living in Kyiv. The friend wrote in English that they had no choice but to leave the town where their family was born and raised.

“My friends there say there’s nothing left to do but hide. We may not be able to do much in Tokyo, but I want people to know what’s going on there by right now,” Tanaka said.

Meanwhile, at a rally outside JR Shinjuku Station in Tokyo, scores of Ukrainians and Russians turned out to criticize Moscow’s invasion of Ukraine.

“I am against the war. Not only me, but all Russians around me are against the war,” said a 19-year-old Muscovite who studies in a Japanese language school.

She has friends in Ukraine hiding in the subway, and she also knows people in the Ukrainian army. She said: “A friend said to me, ‘Every morning I wake up and I think I might die today.’ I hope for peace for Ukraine and freedom for Russia.”

The rally started at 4 p.m. and grew as it went.

Also on February 26, emergency rallies were held in Hiroshima and Nagasaki – the only cities in the world that were hit by atomic bombs – with the slogans “Stop the War” and “No Nukes”. Among survivors of the 1945 atomic bombings, there was a strong backlash against Russian President Vladimir Putin for his speech alluding to the use of nuclear weapons.

“If this turns into a nuclear war, the radiation will reach Ukraine’s neighbors and the damage will spread. I’m watching the situation, scared and on the edge of my seat,” said Toshiyuki Mimaki, 79, director General of Hiroshima. Prefectural Confederation of Associations of Victims of the Atomic Bomb.

About 60 people, including foreign nationals and children, took part in the emergency rally in front of the atomic bomb dome in the Naka district of Hiroshima. Volunteers from Hiroshima and Nagasaki called on residents of their respective cities to participate. At 11:02 a.m., the time of August 9, 1945, when the atomic bomb was dropped on Nagasaki, participants in rallies in both cities demanded that Nagasaki be the last city to be struck by a nuclear weapon.

About 50 people gathered at Hypocenter Park in Nagasaki at the request of 29-year-old Mitsuhiro Hayashida, a third-generation A-bomb survivor. At the protest there, rally attendees released a statement saying, “As human beings of bombed places A who know the catastrophic damage caused by atomic weapons, we strongly protest against Russia for waving the threat of nuclear weapons.”

In Japan’s northernmost prefecture, Hokkaido, protests took place in two cities on February 27. Some 200 Japanese nationals and Ukrainians living in Hokkaido gathered near the south exit of JR Sapporo Station after publicizing the rally on social media, holding signs that read “No War” and “Peace for Ukraine”.

At the rally, Serhii Govorovskyi, 47, a Ukrainian national who lives in Eniwa, south of Sapporo, said: “In Kyiv, my friends stand up for our country. Right now all I can do is talk and pray for their safety. When the time comes to rebuild our country, we will need the help of the Japanese people.” A high school student from Sapporo said, “I realized that invasions destroy people’s lives. It’s wrong to do nothing. I want to continue to denounce what is happening.

A 24-year-old student at Hokkaido University held up a sign saying in English that she was Russian and that she was sorry about the invasion. She told the Mainichi Shimbun that her grandmother was Ukrainian and she couldn’t understand or believe what was going on.

A dozen people also gathered in the Hokkaido city of Nemuro to protest the invasion. Tadashi Jin, 79, who attended the protest, said: “Nemuro is a region with a territorial dispute over the Northern Territories with Russia. If Russia deals with Ukraine using military force, there will be no solution to the territorial dispute.