Pottery students exhibit their work at the museum 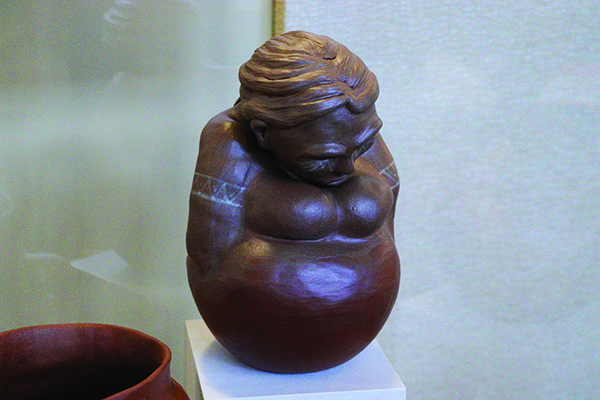 The art of Cherokee pottery is alive and well and moving in the 21st century with renewed vigour. Students in a class called Traditional Pottery for Beginners, tau

A pot by Lori Reed was one of the pieces featured in a pottery exhibit held at the Cherokee Indian Museum on Friday, April 8. The exhibit was organized for students who have completed a course recently taught by Cherokee potter Tara McCoy called Traditional Pottery for Beginners. (Photo SCOTT MCKIE BP/A Feather)

ght by Cherokee potter Tara McCoy and hosted by the Museum of the Cherokee Indians, showed off the work they did during class in an exhibit at the Museum which opened Friday, April 8.

The course was offered free of charge to members of the Eastern Band of Cherokee Indians (EBCI) and was part of the Museum’s Community Learning Initiative.

“Pottery has been my main passion for probably 23 years,” McCoy told the crowd during the presentation of the exhibit on Friday night.

Dr Blythe Winchester, director of geriatric services at Cherokee Indian Hospital, said: ‘So it was a series of three-month courses, one weekend a month. But, we also had homework for different jars to make – a syllabary jar, an effigy jar, a handle jar, a legend jar – so we had to complete those in between. So I think that’s why we were able to earn so much is that we were really passionate and we worked on our pots on days other than the days we had class.

Dr Winchester said creativity was at the forefront of the class. “I think that’s why I like it. This is traditional pottery, but you can really see everyone’s creativity in each style. Just because we’ve been commissioned to make an effigy jar doesn’t mean everyone’s going to have the same animal. We are not going to have the same legend for our legend jar. You want to improve and grow, so I was trying to really challenge myself. I did it.”

Lori Reed has been making pottery for years and is an arts and crafts teacher at Cherokee Central Schools. “This course was very useful to me. I learned to make the fire pot. I never really knew how to do it. I tried to make one before and my little things fell out, so I didn’t have much success. Another thing I really learned was how to do the feet. You think you can just put it there and it will stay, but they don’t. So that was another good thing that I learned to do. It made me happy because it made me feel ‘wow, now I have new skills that I can go back and teach my kids.’

Reed said she relished the new ideas and techniques presented in the class. “She kind of gave us food for thought. We would be stuck doing the same thing, the same shape. And, with these different things, you really have to think about how you want to do it.

Shana Bushyhead-Condill, executive director of the Cherokee Indian Museum, said she was very pleased with the outcome of the class, especially with all the new pottery produced. “I am passionate about all the work we do. And, the class that Tara decided to host here exemplifies what we’re trying to do here at the Cherokee Indian Museum. I think one of the things that makes this job so rewarding is seeing when people have the passion to teach and pass on the tradition. I am grateful to Tara for her work in making this course a reality.

She hopes classes like this will continue and grow. “This is what we hope is a seed that is planted and still growing. I was at a meeting to talk about East Coast native ceramics and one of the women said, “All I do is native art” and I love it! Each of these pieces is so individualistic. You can see each artist’s personality in these pieces and that’s what makes it Cherokee is that it came from that person who made it. We are here to support that. The Museum, I don’t believe, always talks about the past. It is about who we are, who we want to be and where we are going in the future.

She went on to say, “I want to put Cherokee art on the map on this side of the coast because our people are so beautiful and smart and intelligent, we’re rich in culture in art and language and I think just need to be highlighted. So that’s what I’m passionate about. I also want to increase not only the quantity but the quality of the art. We already have wonderful and awesome artists. I just want to take it to another level and not make it a competition between you, but make it a competition between you.