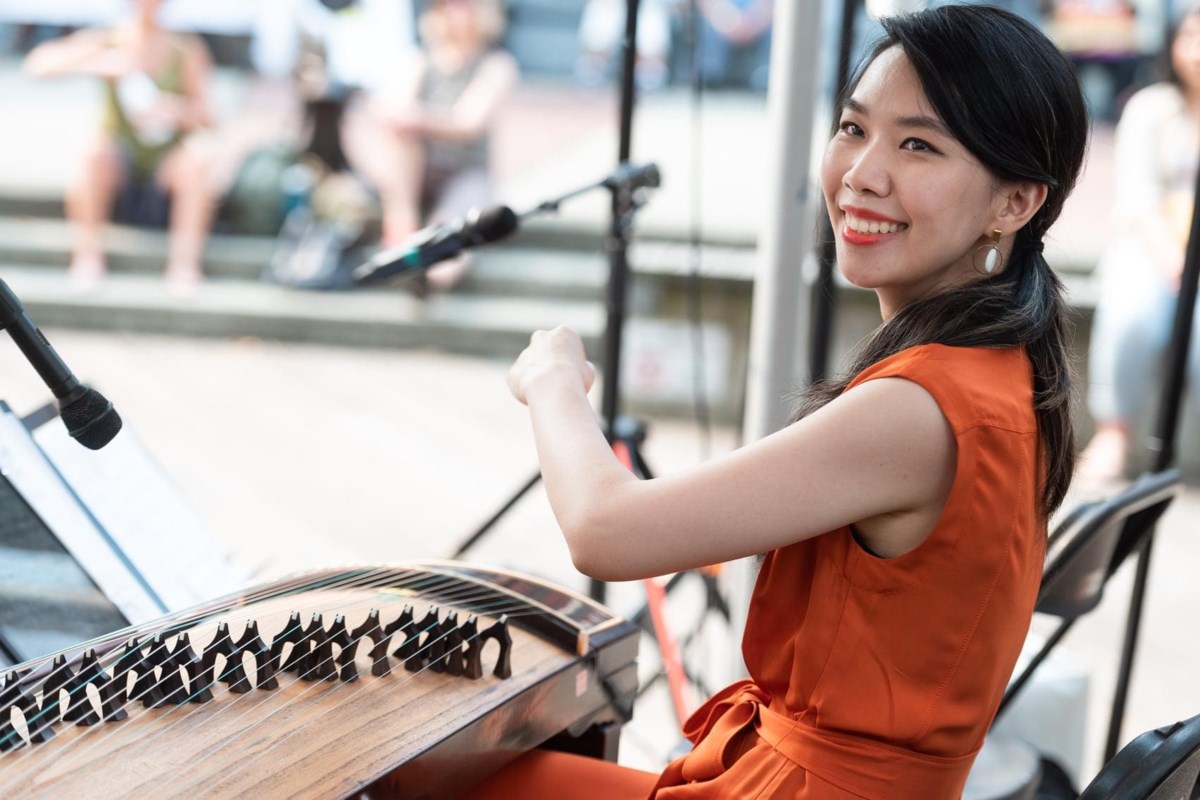 These words, uttered by Korean writer-director Bong Joon-Ho in a moving Oscar speech, eloquently highlight the power of art to break down barriers, with music, dance, film and theater that transcend all the limits of language.

Close your eyes and play your favorite song in your head. How do you feel ? Now imagine it without the lyrics and language support. The power of music is such that it transcends borders. Music touches souls beyond borders, cultures, languages.

Every word, every note carries a feeling.

“Music gives us a moment to let go of the conflict in real life and focus on our hearts and feelings.”

Those are the words of young Burnaby artist, Bruce Bai, who performs this year’s Summer Pop-Up concert series at Mount Pleasant Park with his team, the BC Chinese Ensemble (BCCE).

Bai, the group’s lead vocalist, along with his partner, Dailin Hsieh, who plays the Zheung (a traditional Chinese instrument), explore the complexities of life through their heartfelt music. “I believe that love is part of the music,” he said. “I would like to explore the happiness, the love, the sadness of life through my music. The humanity of life, how to treat each other and make decisions.

Bai started his artistic career when he was young – writing stories, drawing. When he emigrated to Canada, music became an important tool of expression, sparking an interest in learning and producing music. “I went to college to study composition and musical techniques,” he said.

“I originally wanted to be a pop star like any other newbie musician, but when my teacher introduced me to these cross-cultural sets and saw everyone in Vancouver, I wanted to do something more unique.”

Bai described their genre of music as experimental, as they bring a touch of each Chinese culture to their contemporary interpretation of traditional music.

Unlike her husband, Hsieh has been playing the instrument since the age of six in Taiwan. She discovers that the love she has for the instrument creates a bond with her audience during her performances. “Touching people is very meaningful,” she said.

“Although they all came to say the performance was magnificent, you could really see it in their eyes, their reactions. It comes from the heart, and that’s what I want.

“I want my audience to feel real. So that they know my music and above all, me.

Music in the park

The couple’s BC Chinese Ensemble perform a free outdoor concert for this year’s Summer Pop-up series hosted by Music on Main.

Bringing pieces of folk music from every province in China to Vancouver Park on August 17, the ensemble hopes audiences will get a true essence of China – sound and feel.

Music on Main artistic director David Pay said audiences will have the chance to experience different cultures through sound.

“One of the reasons I program music from all kinds of different cultures is because it’s part of our daily lives,” Pay said. “And while we all have music that we know better and music that we maybe even like better, having the chance to step in and hear all kinds of music from different cultures, I think that’s is a great way to spend your summer and get to know your neighbors.

Pay said he hopes people can hear and experience something new and feel a connection to the music, the musicians, and ultimately themselves when they visit the park for the concert series.

Wearing their hearts on their sleeves

Art is a form of expression – and for Bai and Hsieh, expressing their authenticity is important.

While their songs are traditionally sung in Mandarin, the song’s story is not lost on non-Mandarin-speaking listeners.

“That’s the beauty of sound,” Bai said. “Vocals add flavor to music. So when the audience would not understand the meaning of the words, they would still feel a connection to the story through the instrumentals.

The Summer Pop-up series hosted by Music on Main takes place in Mount Pleasant Park from August 9-12 and August 16-18.