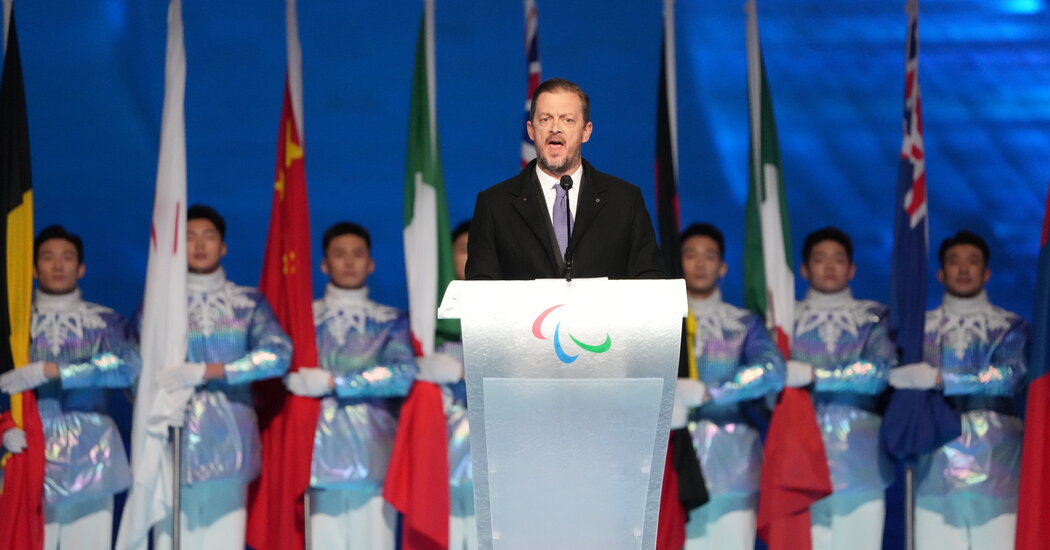 BEIJING — The president of the International Paralympic Committee broke protocol on Friday by denouncing Russia’s invasion of Ukraine in his speech at the opening ceremony of the Beijing Games.

In the presence of Chinese President Xi Jinping, committee chairman Andrew Parsons said he was “horrified” by the invasion. “Tonight I want to start with a message of peace,” Parsons said.

It was an unusually frank rebuke from the leader of an international sports organization and another sign of how the war in Ukraine has affected the event.

Although the Paralympic Games are run by a non-profit organization separate from the International Olympic Committee, the organization runs the event alongside the Olympics and with the same spirit of conduct, while using many of the same facilities.

The International Olympic Committee has in recent years reaffirmed its ban on demonstrations and political messaging at the Olympics, rules that generally apply to athletes. But in this case, it was the Paralympic Games chief who set the political tone, as the war continued to dominate organizers’ agendas in the days leading up to its quadrennial winter showcase.

The Ukrainian delegation, some 20 athletes, entered the National Stadium in Beijing to modest applause, some with raised fists as they walked across the stadium floor in the colorful and elaborate ceremony.

Shortly after Parsons’ speech, social media users in China noted that part of his speech went untranslated on Chinese TV for about a minute, starting with when he said: “At the IPC, we aspire to a better and more inclusive world, free from discrimination, hatred, ignorance and conflict”.

Parsons praised the Chinese for their hospitality, calling the venues “magnificent” and noting that “hundreds of thousands of facilities have been made barrier-free” for people with disabilities. But he also angered social media users, who noted that in his first line, Parsons, who is from Brazil, was referring to “Republic of China”, which is Taiwan’s official name. He may have meant “the People’s Republic of China”, and did so accurately later in the speech.

For days, as the invasion forced the Paralympic committee to deliberate how it would treat Russian and Belarusian athletes, Parsons stressed that it was up to the IPC to avoid politics and practice neutrality in accordance with its rules. But he eventually admitted action was inevitable, noting that the war had interfered with the Games.

On Thursday, Parsons announced that the committee had reversed an earlier decision and banned Russian and Belarusian athletes from competing, an unusual step taken in response to Russia’s attack on Ukraine, which was staged with the support of the Belarus.

Russo-Ukrainian war: what you need to know

Russian Gains in the South. After taking control of Kherson and cutting off the city of Mariupol, Russian forces advanced deeper into southern Ukraine, descending on the port of Mykolaiv, just 60 miles from Odessa, a vital maritime center and the largest city in the south.

Athletes and delegations from many other countries had threatened to boycott, Parsons said, and he added that tensions were rising in the Olympic Village, where the athletes are staying. He said the viability of the Games would be in doubt if Russians and Belarusians were allowed to compete.

Russia and Belarus refused to appeal the decision and their athletes were making arrangements to leave Beijing.

Referring in his Friday speech to the Olympic Truce adopted by the United Nations General Assembly, Parsons said: “It must be respected and observed, not violated.”

The Paralympic Games will run until March 13 and will include more than 650 athletes, a record, representing 49 federations competing in 78 events. Three federations make their debut: Israel, Azerbaijan and Puerto Rico.

Germany has won the most medals at the Paralympic Games, with 365, if you include the medals won by West Germany. Next come Austria (332), Norway (327) and the United States (315).