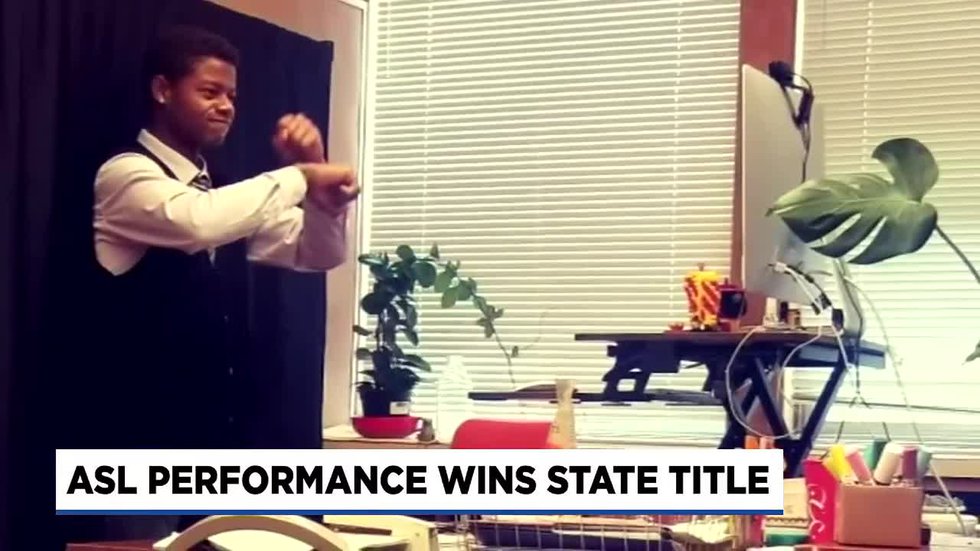 SALEM, Ore. (KPTV) — Trayshun Holmes Gournaris, a senior from Oregon School for the Deaf, has won the state champion title for Oregon’s 2022 Poetry Out Loud contest.

Last Friday, 11 students from across the state entered the spoken word competition. Holmes Gournaris was the only performer to recite his poems using American Sign Language.

FOX 12 sat down with Holmes Gournaris to talk about his experience competing for a second time in the competition and preparing ahead of the virtual event.

Holmes Gournaris says he delivered three different poems, each about him personally. “We started looking at them and reading them to see if it suited me and my signature style,” he said.

Achieving to bring a powerful originality to each, he begins with “The Song of Smoke” by WEB Du Bois.

He continued with “Caged Bird” by Maya Angelou and “Silence” by Thomas Hood.

“You know that feeling of being found out in the cold, with no one to help you, you wanted to be involved in the world, but you couldn’t because of that stillness. How strange and lonely it would be, I think that’s how people of old would feel and that’s how I felt too,” said Holmes Gournaris.

And as he takes on the domestic side of the competition on May 1 and June 5, we asked who his biggest supporter has been from the start, Holmes Gournaris replied, saying his coach and teacher, Gayle Robertson.

“It means a lot to me, and it means a lot that he sees me that way. I love Poetry Out Loud, and Trayshun was an obvious candidate for that because he’s not nervous, he’s confident in front of an audience and I could see he was ready to burst with that kind of language,” Robertson said.