No learning centers yet 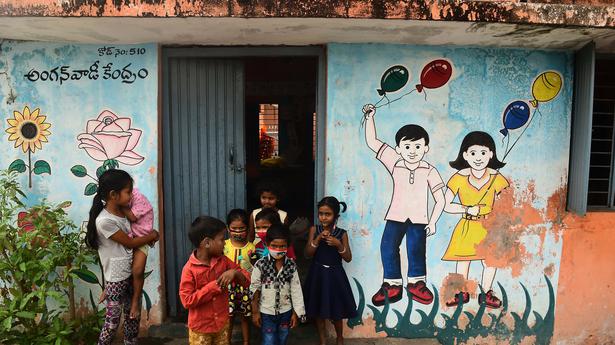 The Anganwadi scheme, designed to support children under six, has yet to reach its potential

The Anganwadi scheme, designed to support children under six, has yet to reach its potential

As we come to [email protected], the Anganwadi system, part of the government’s Integrated Child Development (ICDS) program which serves over 30 million children aged 3 to 6 in 1.3 million of centers across the country, should have been a triumph.

The ICDS program is designed to support all children under the age of six with their health, nutrition and education needs – done right, this would make India a leader over the next 25 years in the early childhood education and deliver our delayed demographic dividend. However, while across India over 70% of children are enrolled in Anganwadis, they are plagued with low attendance – parents simply do not perceive Anganwadi centers as centers of learning.


Parents’ perceptions of Anganwadis are shaped by how the system perceives them. In ICDS reports, parents are consistently treated as ‘beneficiaries’ – passive recipients of rations, vaccination camps and, more recently, education. But that’s not how parents see themselves or their children. Education is for them a gateway to achieving their aspirations and a path to social mobility so that their children can have opportunities they have missed. Primary school enrollment rates that exceed 90% are a direct consequence of the connection in the minds of parents that education leads to opportunities for a better life.

However, the educational ecosystem, including the Early Childhood Care and Education (ECCE)/Anganwadi system, is unwilling to speak the language of the parents. Those of us in the ECCE space often claim to know what parents should want for their children better than they do. But it’s not Sisyphean task to figure out what parents want – we just have to ask them. In the surveys we have conducted repeatedly with rural and urban parents of children aged 3 to 6, more than 80% of parents consistently tell us that the best route for their children’s social mobility is through education involves learning English (spoken and written) and mathematics. skills. This is what they are looking for when they enroll and send their children to a learning center.

Anganwadi systems, with the best intentions, do not meet the demands of parents. State ECCE curricula instead focus on local language-focused, play-based pedagogy recommended by leading Indian educators for this age group. They prescribe free, guided, play-based, activity-based learning facilitated by a trained educator – without thinking too much about how parents might perceive such learning. No wonder then that when asked what they thought of the importance of play, one parent said, “Your kids should study, and ours should play?

The low attendance of Anganwadis is a tragedy for the development of Indian children. According to experts, the ideal kindergarten has a trained animator who ensures that children spend most of their time in free and guided play. This includes exploring and manipulating their physical environments to develop early language, early numeracy, social-emotional, executive and motor functions – at a rate of neural activity they will never regain once they will be older. The best Anganwadis in many states look a lot like this. Staffed by Anganwadi workers with roots in play-based pedagogy, attending Anganwadi for the prescribed two hours a day helps children learn life-saving skills as they play with inexpensive, locally made, indestructible toys in a group framework.

However, by ignoring or downplaying parents’ aspirations and demands (with the best intentions), we have pushed parents to vote with their feet and leave the Anganwadi system. They send their children to the opposite of Anganwadi classrooms – to private preschools which are downward extensions of primary school. Here, 3, 4 and 5 year olds sit in neat rows, practicing joyless, rote learning and memorization of letters and numbers to the exclusion of everything else. More than 7 million children in India attend these age-appropriate private preschools that focus on rote learning from an early age.


To best support our children, we must start by not dating parents and ignoring their powerful and expressed needs for English, writing and math skills. We need to meet the parents in the middle to have a chance of a large scale impact in the short term. This can be done in simple ways – exposing children to the English language at an early age in an appropriate and non-intimidating way – while recognizing that the language spoken at home is the best way to achieve fluency in a other language.

Giving children a pencil to scribble on for a few minutes a day, of course without having them write endless letters and numbers, is a great way to support fine motor skills and later writing. Exposing the wonders of math through fun activities like estimating, comparing, sorting, and seriating could help reduce the fear and math paralysis that prevents them from succeeding in STEM in the years to come. Why not “catch them young” and pass on the idea that math is fun, easy and ubiquitous to younger children? Studies have shown that feeling part of the “math community” goes a long way in reducing this fear, which in turn affects numeracy scores later in life.

Anganwadi centers can follow regular daily schedules that balance time for self-directed free play and teacher-led activities focused on developing cognitive, literacy and numeracy skills. They can also organize regular Shiksha Choupals (parent-teacher meetings) to introduce the learning happening in Anganwadi to the parent community to build their confidence in this institution. Additionally, regular messages can be shared with parents informing them of the nature of the commitment expected of them to maintain the momentum of what is being learned in school.

However, modifying ECCE programs to accommodate short-term parental mindsets does not mean that we take long-term mindsets or perceptions for granted – especially when they are linked to truly unproductive practices such as rote learning and memorization. in the early ages. We have enough empirical evidence of mindset shifting from Swachh Bharat Abhiyaan’s own ‘Chalen Hum School’ of rural education, that we can change minds and behaviors with sustained action and mass campaigns. A mass campaign for age-appropriate ECCE awareness, which involves parents as stakeholders, is crucial over the next five years – our youngest children and their developing brains deserve no less.

As the nation celebrates the joyful occasion of [email protected], Prime Minister Narendra Modi reiterated that the spirit of Azaadi ka Amrit Mahotsav establishes jan-bhagidari (citizen participation) to activate India 2.0. In the ECCE ecosystem, we must embrace the power of ‘abhibhavaak-bhagidari’ (parent involvement) to activate Anganwadi 2.0.