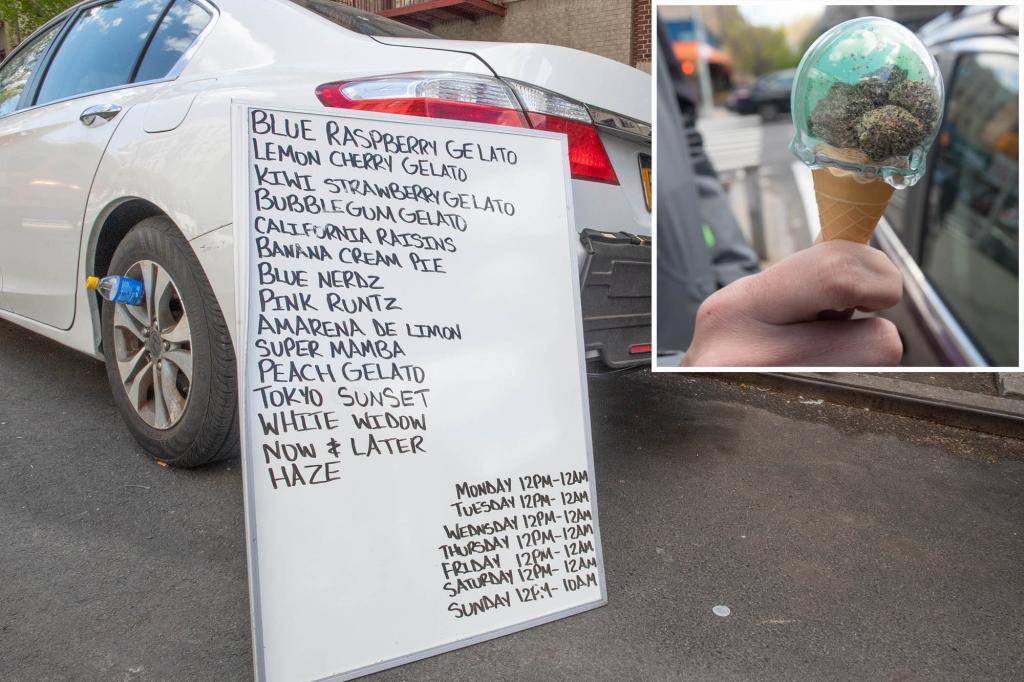 Street vendors sell their weed to children as young as 10 years old – with buds camouflaged to look like candy or ice cream cones – in and around several schools in Inwood.

On Thursday, The Post witnessed the conclusion of three different deals just as classes were being held. One was on Thayer Street, a few blocks from the Amistad Dual Language School; a second took place on Academy Street, a few steps from PS 52; and the third was at the corner of Vermilyea Avenue and 204th Street, at the corner of Washington Heights Academy.

“They’re everywhere — on every corner,” Tatiana Mahoney, director of family and community engagement at Inwood Academy, told The Post.

New York legalized recreational weed use last year, but the sale of marijuana is still prohibited.

Yet Inwood’s pot vendors act like cheeky carnival barkers, running down the street and waving at cars to buy an eighth of “gelato” – a strain of weed, not Italian ice cream – for 25 $. They put their thumbs and index fingers on their puckered lips to mimic smoking and say, “What do you need? I get it.”

A dealer showed off his supply – a backpack full of marijuana nuggets wrapped in plastic ice cream cones.

Mahoney said the daring drug dealers started popping up in September when the city resumed in-school classes after 18 months of online classes.

She said they target kids by posting colorful menus and putting their weed in sweet products, including flavored vape pens and gummies.

“They really are like vultures after the kids,” she said at a recent community board meeting. “I see families who are afraid to sell fruit on the street because they don’t have a license, but these people who sell marijuana, they don’t mind.”

Inspector Peter Andrea, commander of the 34th Precinct, said his officers regularly hand out citations to these traffickers and that the narcotics bureau is carrying out a long-term investigation.

The parents are worried.

“I’ve never seen my community sink like this,” said Pedro, who did not provide his last name for fear of retaliation from dealers. “It was bad in the 70s, but it’s worse now.”