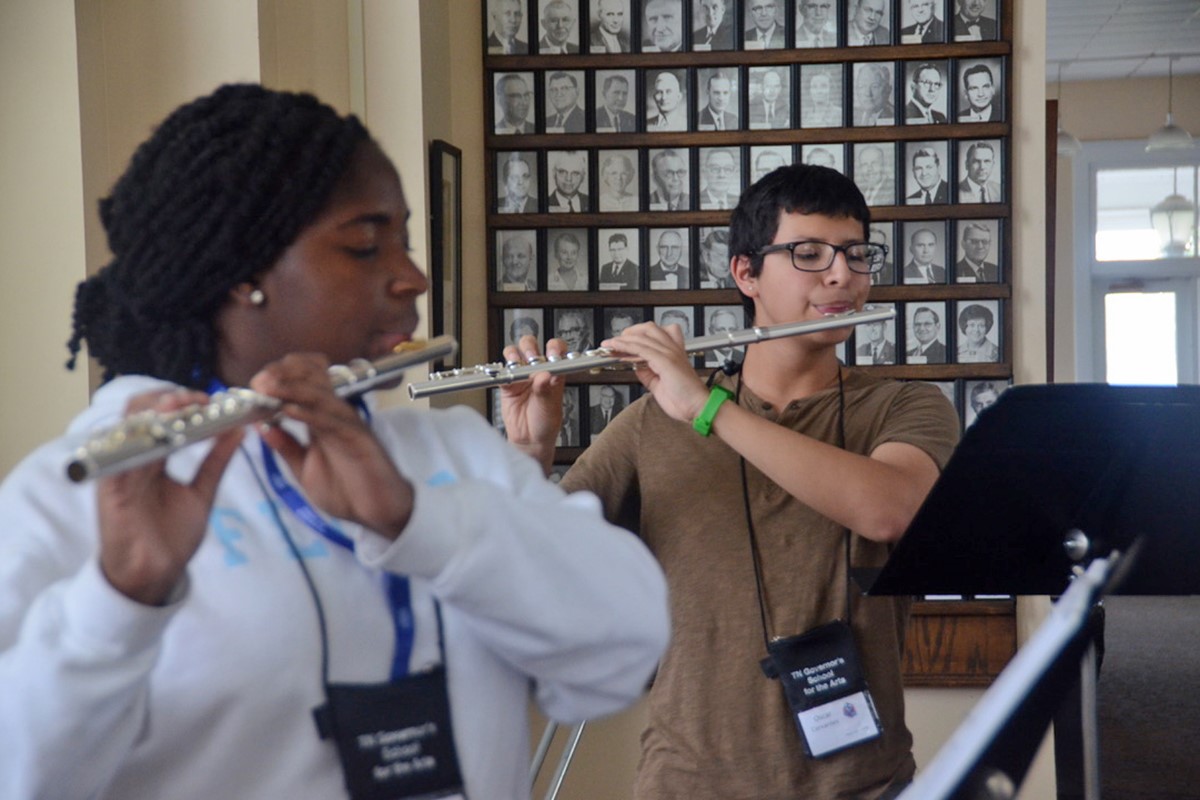 MURFRESBORO, Tenn. – For the past 37 years, the Tennessee Governor’s School for the Arts, hosted by MTSU’s College of Liberal Arts, has been a tool for the education, training, and development of high school arts students across Tennessee.

This year, more than 290 of these young artists will perform and showcase their talents at the Grand Finals events scheduled for Friday and Saturday, June 24 and 25, after nearly a month of instruction by a host of MTSU faculty and from across the country in vocal and instrumental music, visual arts, theatre, dance and film.

Katie Goodwin, assistant professor of drama at MTSU, the new principal of the Governor’s School for the Arts, also known as GSFTA, noted that students admitted this year, like previous years, must go through a screening process. application and selection for the three summer weeks. residency program.

“The GSFTA is for aspiring juniors and seniors who apply in the fall. We hold a series of auditions and portfolio reviews to choose the right students for 22 days of arts education on campus,” said Goodwin, a faculty member in the theater and dance department for six years, who is also an alumnus of MTSU Theater.

“They have to show grades and transcripts to be considered. Each of the artistic fields has a coordinator, and after the auditions, selections are made. They get three hours of college credit (and) have (MTSU student) M numbers and IDs. They are also preparing for university life.

This year’s Governor’s School has 293 students from 31 different counties across the state who were selected from 600 applicants this year.

“Some years we had 1,200 applicants,” Goodwin said. “We thought we’d be virtual (again) this year as our enrollment was lower last year due to COVID, but we’re up about 50 students, with hopes to get back to (the) 350 that are generally accepted.”

As host of the Governor’s School for the Arts, MTSU awards scholarships with grants from the Tennessee Department of Education to help students with program fees, allowing them to enjoy an unforgettable experience on the campus.

“What often happens is that the students who have attended the GSFTA are the ones who go back to their schools to tell others,” Goodwin said, “but that information goes out to all of our schools in Tennessee before that. – both public and private secondary schools, even homeschooled students, simply because we are open to all secondary school students.

While they expect “wonderful exhibits for parents and others to come and see what we’ve been up to,” Goodwin said a significant portion of the Governor’s Annual School “is tied to the training and experience they get from the faculty, consisting of excellent artists and teachers.

“They are working to be able to present premieres of opera, orchestra (and) films, highlighting music and theater,” she added. “A lot of them can happen, so we leave them on campus to immerse themselves in arts education. They gain experience, make friends, who will be part of their connection.

“They feel understood because they speak the same language of something they are passionate about. They might not be surrounded by that in their various schools. They find relatives.

Deanna Little, an MTSU School of Music professor and GSFTA instructor who primarily teaches flute masterclasses and chamber music coaches, said the Governor’s School uses chamber rehearsals for students to “learn to work as a team” and prepare for their performance during the last week of camp.

She observed during a rehearsal that she hopes to see growth in her Governor’s School students.

“I hope music students grow as musicians, get a sense of what it can be like to continue music in college, gain independence and functionality away from home,” Little said. “They should also become more focused on pursuing music, making lifelong friends, and developing genuine perseverance in working towards their passions.”

MTSU student Cameron Roberts, an alumnus of the Governor’s School, is helping the GSFTA office this year with logistics and social media. Now a junior music education major, Roberts said his experience in 2019 led him to this academic path.

“In 2019 I was at GSFTA for music, and that’s the main reason I’m here, because then I explored the beauty of MTSU and the beautiful facilities here, (and) I learned how to know the faculty,” Roberts said.

Roberts hired applicants to this year’s Governor’s School once they applied online “keeping track of their correspondence, such as sending mail and tracking missing documents and financial responsibilities.”

He also circulates around campus “taking pictures not only to let parents know that we are doing our job, but also to let people know about the Governor’s School.”

“Communication has been great and everyone seems in good spirits to make sure the students are having fun,” Roberts said.

He added that he considers himself lucky to be part of the project.

“By receiving 600 applications, I know all the names of these students; I feel like I know them all. Being there in 2019 let me know that’s where I want to be, and it’s so much fun to be behind the scenes. Students send me things to post, and it’s fun that they see campus the way I saw it,” he said.

As high schoolers get closer to college, Roberts said, they have to start making choices about their future, and attending Governor’s School has helped him do that.

“Not everyone is in the field they come here to study; some of them come to have fun, and some of them find out what they want to do. I came to Governor’s School at MTSU in 2019 and understood what I was going to do.

Goodwin said she wants to see more representation from rural areas of the state in future years.

“One of the things we’re looking forward to next year is recruiting from some of the rural areas where we don’t traditionally take students from,” she said. “We are well represented in some of our larger cities, but in rural areas we usually don’t have (many) representatives.

“It could be that their high school maybe doesn’t have the resources to have a strong (arts) program, like a dance studio or community theaters that kind of help with the development and love of the arts .”

Goodwin took over leadership of the program from longtime GSFTA director Raphael Bundage, a vocal performance teacher at the School of Music who led the Governor’s School for more than a decade.

The new headmistress said she wants to “continue to work on the standards that keep the Governor’s School of the Arts going”.

“I do a lot of correspondence with different areas of campus to make sure we’re good hosts. If we do it right, these kids will feel at home here, and when they see where they want to go to college, they’ll consider MTSU,” she said.

She added that she hopes these young talents “get a good experience” of what they do so that “they know they can go anywhere from the GSFTA”.