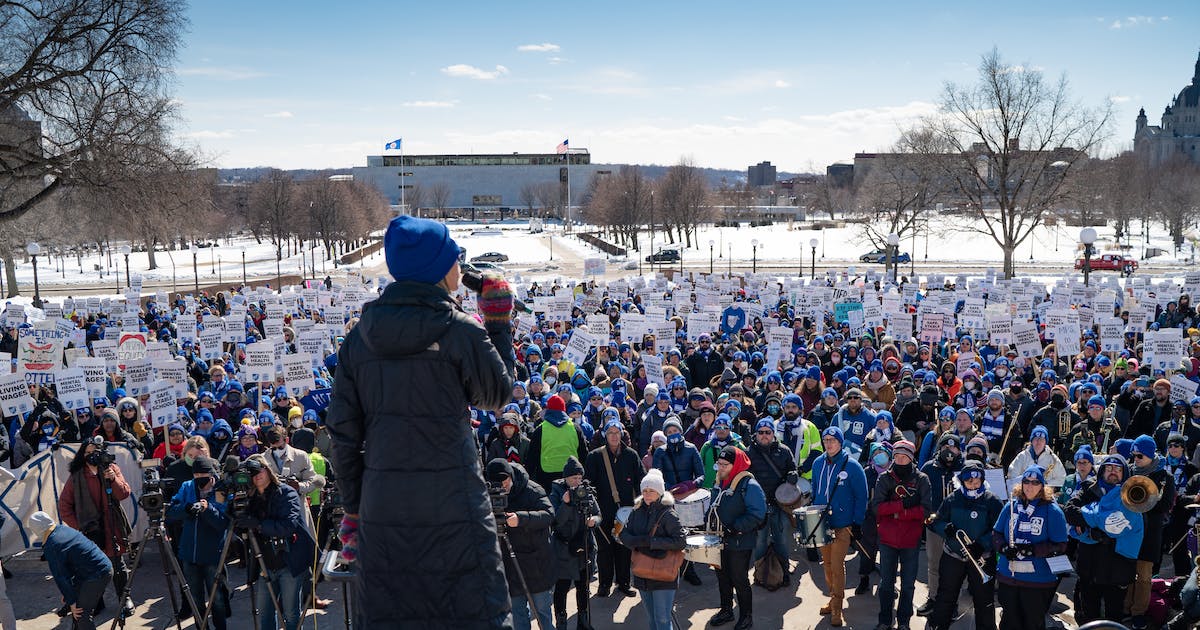 Negotiations continue Monday between the Minneapolis school district and its teachers’ union as the group’s strike stretches into another school week.

After the weekend mediation sessions, district chiefs and union leaders both said they wanted to end the strike quickly. District officials said their latest offer represents a “financial limit.”

Classes are canceled Monday and indefinitely until both parties reach an agreement.

“They did it in St. Paul, we can do it in Minneapolis,” said Shaun Laden, president of the Educational Support Professionals Chapter of the Minneapolis Teachers’ Federation. He said the union’s goal was to put its priorities, including class size caps, mental health supports and higher wages, into contract language.

In a brief press conference Sunday, four school board members spoke about the district’s latest offers and highlighted what they say are financial burdens the state has imposed on its public schools.

Without additional state funding to help fill gaps in payment for state-mandated special education and English-language learning services provided by the district, Board Treasurer Kimberly Caprini , said the district “will continue to struggle financially year after year.”

The District of Minneapolis is forecasting a budget shortfall of $21.5 million, despite using $75 million in one-time federal relief funds.

Caprini said the district last proposal “significantly increasing” spending “in recognition of the extraordinary work of our staff over the past two years.” If the union accepts that offer, she said, the district will have to make “further drastic cuts” if an infusion of additional state dollars doesn’t come.

The district’s offer represents an increase of about 9% in support staff salaries over two years and a 7.4% increase in teacher salaries, according to an update posted on its website Sunday evening. The district also proposed to include contractual language limiting class sizes in “highest need” schools as well as one-time investments of $3 million to add more mental health supports for students, said Jenny Arneson, Board Member.

“We know this does not meet current union demands, but we have reached our financial limit,” Caprini said.

Greta Callahan, president of the union’s teachers’ chapter, said the district’s weekend offer was the first she said represented bargaining movement toward a deal, but some of that momentum was lost. Sunday. Union leaders have been pleased to see progress toward capping class sizes, but district leaders are still hesitant about what they’re willing to write into the contract, Callahan said.

“We want to make a deal, but they’re refusing,” Callahan said, adding that the union continues to ask for more board members to participate in mediation sessions. “We are very willing to move forward on the numbers, but we need to make sure our priorities are in contract language.”