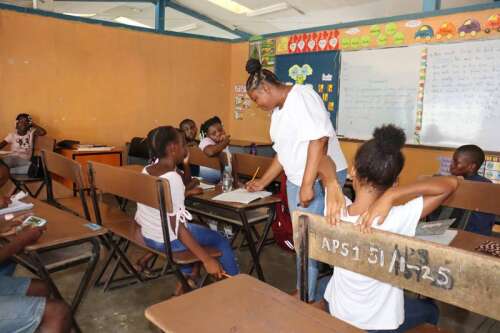 Roshane Reid (standing), an assistant lecturer at the University of Technology in Jamaica, supervises seated work activities during the first day of the recently held free language arts classes at Arcadia Elementary School in St Thomas.

“Some people might wonder why the focus is on PEP during the summer. It’s because preparation for PEP starts as early as kindergarten. It’s not something you prepare for with a marathon. , Easter, or extra lessons Favorable academic results for the PEP exam are articulated on a solid foundation, so we thought it was a good idea to help students prepare for the PEP before the start of the new school year,” the mother-daughter duo said.

This activity is the brainchild of Reid, a senior lecturer at the Jamaica University of Technology, who revealed that the idea for these free PEP courses in language arts came to her while she was washing her hands at the back of his house.

Reid explained that at the start of the novel coronavirus pandemic, “a number of emotions came over me and I was extremely concerned for the children of our country, many of whom did not have access to structured lessons. As a result, severe learning loss has occurred due to a myriad of issues such as internet unavailability, lack of devices, or infrequent/unstructured classes. many areas of life in the education sector”.

“As a speaker, I know all too well the writing abilities of adults, many of whom are young people,” Reid continued. This, she laments, is often below the level required to absorb the course content offered in academic writing courses plagued with challenges, in terms of vocabulary, sentence structure and expression.

“I wondered if so many of our Jamaican children had not been able to access education in a meaningful way during the pandemic, what would be the quality of university students in the years to come? I think we have to meet the challenges with our education system to significantly reverse the learning loss that has occurred. Identifying and implementing accessible, standardized national programs to reverse this loss is paramount as we move forward into the new year. university,” she said.

Mitchell, a lecturer at the International University of the Caribbean, added that she has reached out to her 179 Mico classmates and fellow justices of the peace from the St Thomas Lay Magistrates’ Association, some of whom have pledged contributions.

Expressing her gratitude, she said that “we have to thank our main sponsors – Supermix Distributors in Morant Bay; Kem-Lo Superette in Hampton Court; Lat-tan’s Party Supplies in Port Morant; Steele’s One Stop Machine Works & Supplies in Arcadia; Taste of Home by Yash in Florida and Maxine McPherson, along with several individual donors, to make this a reality. I’m just thrilled and extremely grateful that one, one cocoa really filled our baskets and that we were able to organize this event .”

She further explained that each day features a motivational speaker on current issues, as well as pastors.

“We would like to thank the pastors of the various churches who volunteered to do daily devotions – Reverend Errol Scott, Reverend Glen Nixon, Pastor Darlene McCalla and Elder Lucan Turner. This activity would not be a success without speakers who donated their time, which include National Council on Drug Abuse addiction counselor for St Thomas Marisha Burgess; lawyer Karyl Ray; teacher at Wolmer’s Trust High School for Girls Nadia Elliott; and the Corporal Granville Welch. Most importantly, we thank the teachers at Arcadia Primary & Infant School, Ms. Kaymarie Hamilton-Forrest and Ms. Racquel McIntosh, and other volunteers who have contributed in a variety of ways.”

Kahera Henry, a fifth grade student at Port Morant Primary and Secondary School, expressed her gratitude for the event and said: “The language arts explosion was fantastic. I learned how to organize paragraphs body and transition words, which helped me improve my writing. The food was great. I enjoyed every day.” 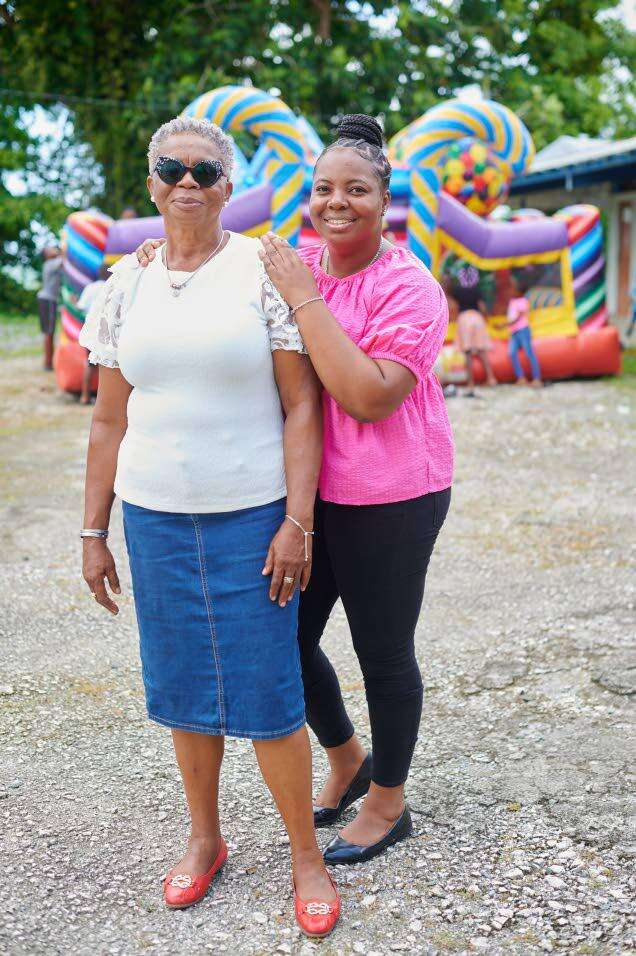 The mother-daughter duo of Sharon Mitchell and Roshane Reid are all smiles on the final day of free week-long language arts lessons held recently at Arcadia Primary School, St Thomas.