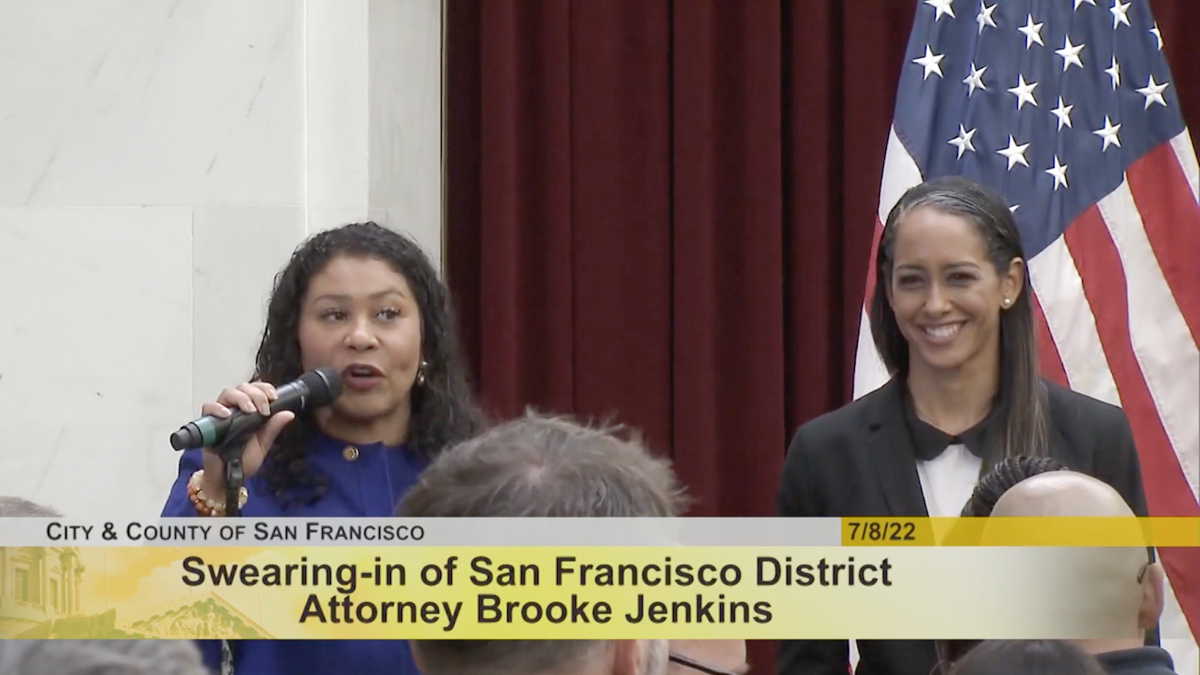 The mayor’s office responded to Jenkins’ press inquiries and sent out his announcements to the media. He also provided the district attorney’s spokeswoman with the text of Jenkins’ recent memo supporting increased police surveillance, which was later released on district attorney letterhead.

The documents were obtained through a public records request.

The correspondence is mainly between Robyn Burke, a public information officer who worked for fifteen years in the prosecutor’s office, and Andrea Bruss, who is the deputy chief of staff to the mayor of London Breed. Veterans of the district attorney’s office were confused and concerned when Bruss followed Jenkins to a July 8 meeting with about 30 senior office staff.

Veteran prosecutors, even those not enamored of ousted prosecutor Chesa Boudin, were baffled by the move, which they felt was contrary to the mission of an ostensibly independent office.

But contact between Breed’s deputy chief of staff and the prosecutor’s office didn’t stop there.

At 9:52 a.m., Bruss sent Burke the text of Jenkins’ letter regarding a push favored by the mayor to expand police access to private real-time cameras. And at 11:36 a.m., Burke sent that letter to Supervisor Aaron Peskin and Supervisory Board Clerk Victor Young.

Without the email chain leaked via a public records request, the backstory of a document signed by Jenkins and appearing on DA stationery would not have been apparent.

That same day, Bruss, from the mayor’s office, sent Burke a press release for Jenkins’ July 12 press conference in a Tenderloin parking lot, in which she promised a new era of accountability for drug traffickers. of the region.

“Thank you for sending out the media advisory for the 10:30 a.m. event tomorrow (please find it attached),” Bruss, from the mayor’s office, wrote. “Could you please send it later tonight. I’ve also included the press list I have.

Members of this press list could not help but notice that the email sent by Burke was the identical template for Mayor London Breed’s daily announcement of scheduled events, down to the line of subject and three asterisks on either side of the words “media advisory”. .” Also, Jenkins’ name was spelled “Jenkin”.

While that detail was suppressed, the level of oversight exercised by the mayor’s office over his appointee elsewhere was exacting. On July 8, Bruss wrote to Burke, providing him with the Chinese characters for Jenkins’ name (they loosely translate to “Jenkins Safety Good”). “If you send me the new evidence, we can check,” the mayor’s aide told Burke.

An email to Bruss was forwarded by Jeff Cretan, the mayor’s spokesman.

“The mayor’s office provided basic logistical support as part of the district attorney’s transition,” he wrote. “This includes helping to ensure that the appropriate staff in the office have certain documents to send during this transition period. Our staff did not create or send documents on behalf of the DA. »

Jess Montejano, Jenkins’ adviser and former adviser to Mayor Mark Farrell, confirmed to Mission Local that he took it upon himself to “draft and get the prosecutor’s statements approved.” He says he does this on a voluntary basis and also volunteers to help with “day-to-day strategic communications and media relations as she continues to recruit staff.”

Breed tapped Jenkins, the former face of Boudin’s recall, to take over from his former boss on July 7. Mission Local is informed that Jenkins herself did not learn that she had been selected for this position until July 6. She was sworn in on July 8.

Even members of the DA’s office who weren’t supportive of Jenkins said they felt she had ‘done no favours’ by being thrust into the position with only hours to prepare, let alone days. or weeks.

But staff veterans were still discouraged by the overt and practical behavior of the mayor’s office – which several veterans of the office confirmed had not been exercised when Breed in 2019, Suzy Loftus was appointed to the vacant seat of George Gascón.

Quentin Kopp, retired supervisor, judge and former ethics commissioner, said no rules were broken: “I don’t think there’s a law against it. If that’s what the DA wants to do, the DA is an independent public official. If she wants to run her office that way, I don’t think there’s any law preventing her from doing so.

This view was echoed by Steve Wagstaffe, DA of San Mateo County, who pointed out that the mayor had no legal authority to order around the DA.

As for perception, however, it is less clear.

“Perception is something that worries me every minute of every day,” he said. “I always want people to feel that their DA is very unbiased. 58 DAs should always consider whether there will be a perception of fairness and impartiality.