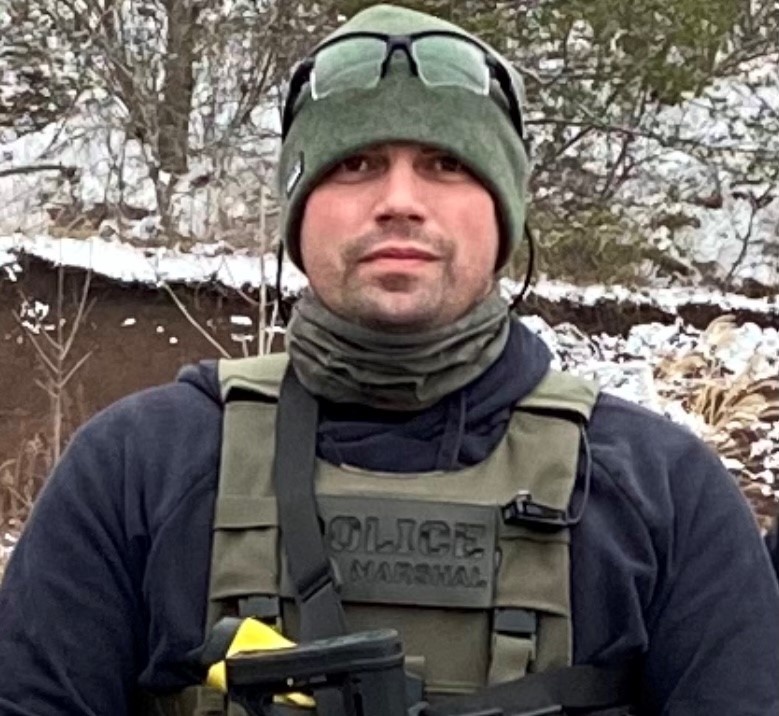 Matthew Barger’s career with the US Marshals Service (USMS) has taken him across the country and abroad, but the Jackson, Ohio native is happy to be a little closer to home with his current mission in Charleston, W.Va.

The officer in charge of the Southern District of West Virginia Violent Fugitives Task Force, Barger received his associate degree in applied science in law enforcement technology and his bachelor’s degree in criminal justice from the Ohio University in 2011.

Barger manages a group of local officers based in Charleston, and his work involves working with other law enforcement agencies and colleagues in other states as well as with international partners. He and his team are tasked with finding and arresting federal, state and local fugitives accused of violent crimes like murder, rape or pedophilia.

Barger began his law enforcement career as a probation officer working with Jackson County courts and was able to combine his OHIO degrees and military experience to qualify for employment with the Marshals Service. .

After attending the Marshals Service National Training Academy in Georgia, as well as Criminal Investigator Training and Basic Assistant Academy, Barger was assigned to a position in Washington, DC. His first assignment was to work in judicial operations. He has been working in the Charleston office since 2017.

“Due to the education and degree I received from Ohio University, I was hired by the United States Marshal Service in early 2013,” said Barger. “During my career at USMS, I have had the good fortune to work on various missions in the United States and around the world.

Barger served in the Army National Guard from 2003 to 2015 and deployed to Iraq in support of Operation Iraqi Freedom in 2004-2005. Upon his return from Iraq, he attended courses at Ohio University on the Athens, Chillicothe and Lancaster campuses. He completed the Army Officer Candidate School and received his bachelor’s degree from OHIO as part of the requirements to become a commissioned army officer. He was appointed second lieutenant and left the army as captain.

His associate’s degree in law enforcement technology gave him a working knowledge of criminal law, rules of evidence and the conduct of criminal investigations, according to Barger. As part of his criminal justice degree, he took courses in psychology, sociology and other disciplines that prepared him to manage and lead a team of other law enforcement officers.

Barger’s father served as a police officer in Southeast Ohio for 25 years, and although senior Barger tried to get his son away from law enforcement, Barger saw the impact of his father in their community and wanted to follow in his footsteps. He took his father’s advice, however, to embark on a career with a federal agency.

“He said you could have a bigger impact there,” Barger said. “As a US Marshal, we can affect our state and the surrounding states by pursuing these fugitives who are really bad guys. ”

Barger said one of his favorite OHIO professors was Dr. James McKean, who teaches courses in law enforcement technology and criminal justice. He said he learned about the court process and what it takes to set up a criminal case by portraying a defense attorney in mock trials for one of McKean’s classes. Barger also recounted that when he couldn’t afford McKean’s terrorism course manual, the professor found an older version of the book and gave it to him.

“It shows a lot of his character and how much the program cares about its students,” said Barger.

As a student at OHIO, Barger had to study a foreign language. He struggled with his Spanish lessons, but his instructor taught him to never give up, and now his familiarity with the language serves him well in his job.

“It turns out that Spanish is quite important,” he said.

He applied the language skills he learned at OHIO by investigating international cases that took him to Central America or that required the review of documents in Spanish.

Barger remembers well the impact all his teachers had on him and on his education. Barger said he’s better able to do his job because of the concepts and lessons he’s learned at OHIO. These lessons included learning about different cultures in a sociology course.

“We don’t all look at things the same,” Barger said. “If you can talk to people, you can do your job better. ”

Barger advises students who wish to pursue a career in law enforcement or criminal justice to take the time to learn different fields and experience different cultures and perspectives.

“I think that makes you a better cop,” he said.