Learning from chimpanzees: overview of the structure of language 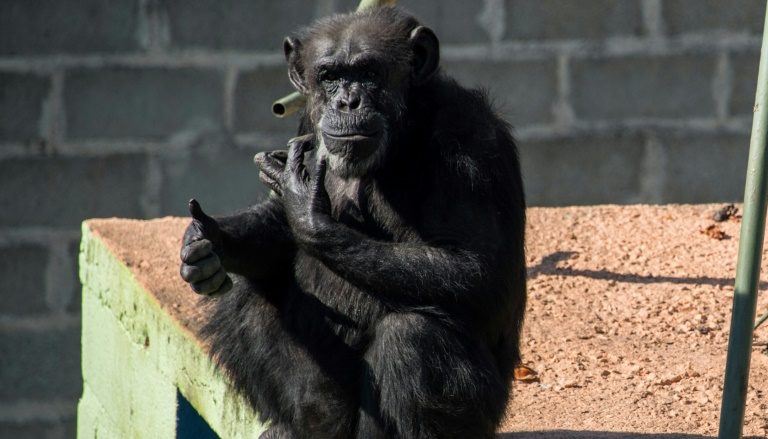 In 2017, an Argentinian court granted this female chimpanzee Cecilia the right not to be imprisoned without trial, under the terms of habeas corpus – Copyright AFP/File CHAIDEER MAHYUDDIN

At the first level, the way animals communicate with each other seems quite simple. Yet there also remains an area of ​​uncertainty as to how our language evolved from such a simple system.

Scientists from the Max Planck Institute for Evolutionary Anthropology report how they found evidence of structured vocal sequences in wild chimpanzee communication. Not only is this breakthrough undemanding on chimpanzees, but it also provides insight into the evolution of human language.

People communicate using hierarchically structured sentences, but the origin of this ability is unknown. Clues to the evolutionary origins of human language are usually sought using a comparative approach, such as studying the speech production of other animals.

The research found that the animals produced hundreds of different vocal sequences containing up to ten different types of calls. The order of the calls in these sequences followed certain rules and the calls were associated with each other in a structured way.

The next wave of research considers whether this structure may be a step towards human syntax and whether chimpanzees use these sequences to communicate a wider range of meanings in their complex social environment.

Human communication is complex and it stems from the way people combine sounds in a structured way to form words and hierarchically combine these words to form sentences to express an infinite number of meanings.

The researchers recorded thousands of vocalizations produced by members of three groups of wild chimpanzees in the Taï National Park in Côte d’Ivoire. From these, they identified 12 different types of calls and assessed how chimpanzees combine them to form vocal sequences. This revealed a previously unknown complexity in terms of communication.

Additionally, chimpanzees communicate with each other using hundreds of different sequences, combining up to ten call types across the entire repertoire. Calls occur at certain positions in the sequence, following adjacency rules. These adjacency rules also applied to sequences with three call types.

It is hoped that further explorations of chimpanzee communication will shed light on where we came from and how our unique language evolved. This will follow from further study to understand what the complex and structured voice sequences of chimpanzees mean and whether these variances allow chimpanzees to increase the range of topics they can communicate about.