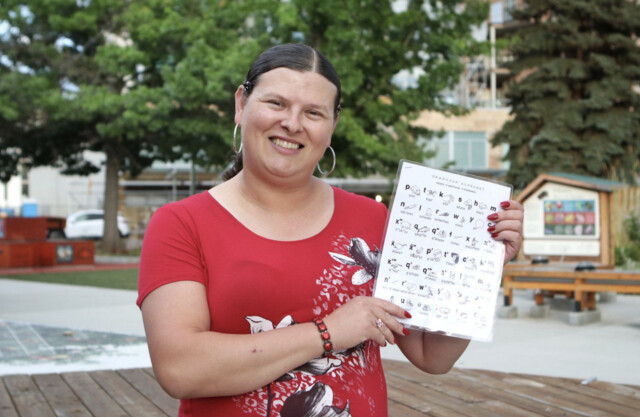 In an effort to help preserve nsyilxcen, the language spoken by the syilx, and to promote the nation’s unique teachings, Kelowna Museums is offering a four-week introductory nsyilxcen course in August.

Once a week for one hour, August 4-25, Natives and non-Natives gather in the museum’s outdoor classroom at Laurel Square in ki?láwna? (Kelowna) in the syilx homelands to learn basic nsyilxcen vocabulary, pronunciation, place names and greetings.

A partnership between Kelowna Museums and Wildrose Native Traditions, the course is taught by xatma sqilx? Jasmine Peone, Westbank First Nation (WFN) member and syilx knowledge holder. According to the syilx Language House, the language is “critically endangered with fewer than 40 fluent Elders and only a handful of intermediate to advanced speakers”.

Peone, who was a student at the syilx Language House, added that the Kelowna museum course also serves to promote alliance with non-Natives. The museum first offered the course before the pandemic and has now brought it back for the second time.

“Having these classes, working with the public to teach them some very fundamental aspects of our language and our culture, it reinforces some of that appreciation and gives some of the settlers the opportunity to be able to engage with us” , she said.

“To get to know each other and to be able to appreciate the beauty of our culture and who we are, some of the knowledge and wisdom contained and embedded in our language and culture.”

As a beginner’s course, participants are not expected to come away with the ability to hold a conversation in nsyilxcen. However, the course gives participants the opportunity to not only learn nsyilxcn characters and letters, but also gain a deeper understanding of the cultural meaning of each word. Participants also learn a number of different syilx values, such as the captik, which is a collection of syilx teachings on laws, customs, and principles.

Peone pointed out that many syilx teachings, wisdom and worldview are embedded in nsyilxcen.

“It doesn’t translate the same way in English,” Peone said. “Our worldview is simply unique, and our language truly embodies it.”

For example, the English translation of ksl?slip? is “gathering firewood”, and kl?m?l?m?x?qinm translates to “singing a love song”. sisyús is defined as “good at doing things”, and nqlqilxecn” translates to “speaking an indigenous language”.

“There are cultural elements that can only be described by language. So many words (syilx) are filled with cultural meanings,” said Firedancer, who is Cree and Métis.

“If you don’t know the language, you miss out on a lot of the culture.”

Working with the Syilx community, Linda Digby, executive director of Kelowna Museums, said elders and knowledge-holders shared the importance of land and language as central to their understanding of self.

“I’ve heard a number of people from the Syilx community invite us to be part of this process of mobilizing the language – helping to spread it more widely,” Digby said.

“They told me that they needed all possible allies to help them with this goal. It’s bigger than what can be done in community; it must be a shared goal.

Peone and Firedancer noted that there is growing interest from non-Indigenous people to participate in the program.

“Teaching the public helps create allies and awareness. The more we have, the more people we have who support us and unite with us, support the initiatives that we carry out,” said Peone.

“I think all of this is important to preserve the language and ensure its survival.”

If there’s enough interest, Firedancer said the museum could host a second beginner-level playthrough. Tickets for all museum learning programs, including language classes, are free for Natives.

“Many Indigenous languages ​​have ‘disappeared’ as a result of violent colonization during the residential school years,” Firedancer said. “Now that the general Canadian public is beginning to take notice of these atrocities, there is much more interest in preserving these languages.

For Peone, she said she hopes participants, especially those who are non-Indigenous, will leave the course with a new understanding and appreciation for the sophistication of Indigenous cultures, knowledge systems and understandings.

“At the same time, how simple, humble and balanced they can be,” she said.

“I really hope they take away a deepened or increased interest in our languages ​​and cultures. I hope that at least some of the people who take this program will consider how they can contribute positively to linguistic and cultural revitalization at the coming.