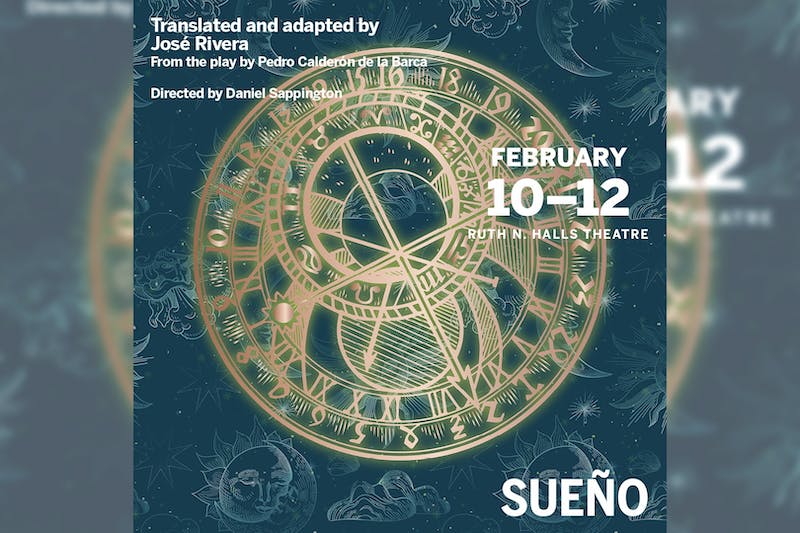 “Sueño” is directed by Daniel Sappington, grad candidate in directing and associate professor of theater at IU. The drama is a modern take on Obie Award-winning playwright José Rivera’s translation and adaptation of the Spanish play “Life is a Dream” by Pedro Calderón de la Barca.

Set in 1635, the drama follows the life of Prince Segismundo, heir to the throne of Spain. Segismundo’s father, King Basilio, banishes the prince to a tower upon his birth when astrologers predict his reign as king will bring ruin to the country.

Once the prince turns 25, Basilio frees Segismundo to test his potential as a ruler. If the prediction holds true, Basilio will re-imprison Segismundo and assure him that his son’s brief taste of freedom was just a dream.

Second-year master’s student and actor Gavin Douglas, who plays King Basilio, said that although the play appears to be a dense classical play, the modern language makes it approachable and relatable.

“Because the language is modern, you’ll be able to pick it up instantly,” Douglas said. “It’s really deliberately and carefully crafted for a modern, up-to-date audience.”

Sappington said that while Shakespeare’s plays are frequently performed on college stages, works from the Spanish Golden Age are often overlooked. While “Sueño” itself is an adaptation and not a Golden Age text, the play’s source material, “Life is a Dream”, is one of the most notable and most dramas to emerge from the era.

“This text serves as an entry point into the Spanish Golden Age,” Sappington said. “The cast and creative team are extraordinarily talented and their work is simply inspired.”

“Our approach reexamines this text not as a dream, but as a nightmare of misogyny and male domination,” Sappington said.

Douglas said the quirky set and costume design choices present this ancient history in a rather unconventional and shocking light, in the best possible way.

“We’re not just working with the text, but we’re also working to subvert it and approach it in a very unique way,” Douglas said. “There are going to be times when there is flowery, poetic language, and then something is going to jump out at you so suddenly you won’t believe you heard it or saw it.”

Tickets are $10 for students and $20 for all other customers.