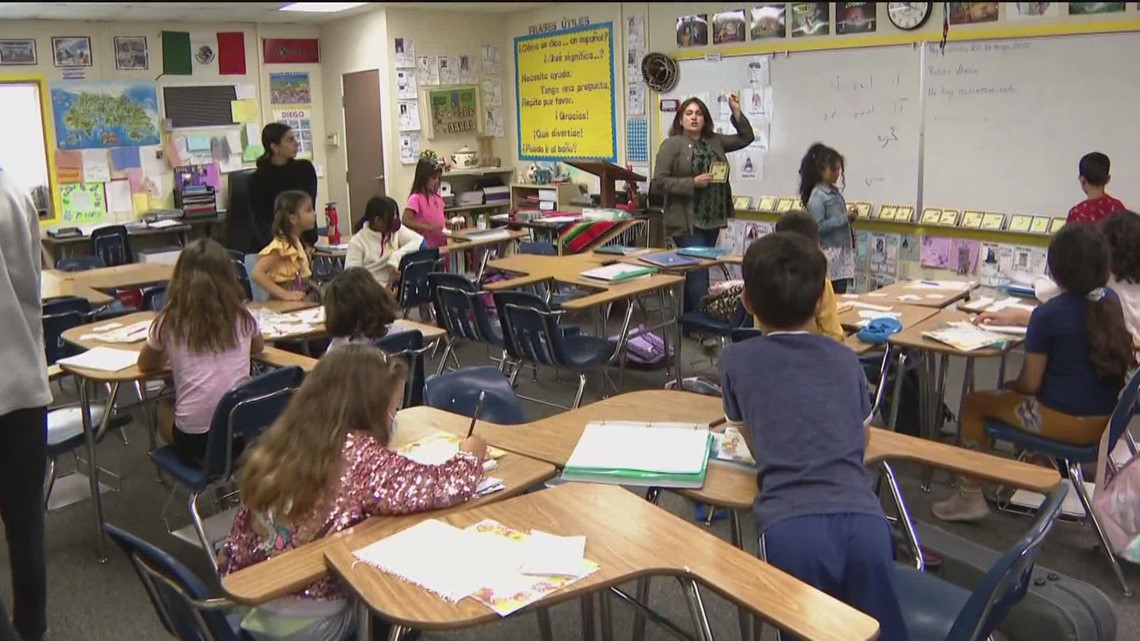 SAN DIEGO — Iran is on the Asian continent, but no one here would consider themselves Asian. I have never done it and both my parents are Iranian. So what are we? We went to the Iranian School in San Diego for an answer.

By learning to read, write and speak Farsi, many of these children can stay in touch with loved ones in Iran. Ava Pirouzian, 8, said: “It’s a great language.

Being together at the Iranian School in San Diego also gives them a sense of community. “The most fun part is playtime,” said 7-year-old Armin.

As these kids test their reading skills, they are also testing mine: “This one is Danesh Amooz. To the right? A student.”

About 200 students, or as it sounds in Farsi, “donesh amoozha” spend several hours each Sunday morning at Mount Carmel High, many starting as young as 5 years old.

I ask “Has anyone been to Iran?”

Neekon tells me he has been to Iran 11 times.

When I then ask how it is since I’ve never been there, some students respond saying “the food is really good”.

The kids beamed with pride as they talked about a country thousands of miles away that they truly connect with.

Which then brings me to the question – what do they say when people ask where you’re from?

Nava Taghavi said, “I tell people that I am from Iran and some people don’t know where Iran is or what Iran is.”

Even though Iran is on the Asian continent, no one says it is Asian, but if it has to be labeled by region, some push to be considered South West Asian or North African (SWANA).

Some would say that these descriptions would be more geographically correct and modern than being called “Middle Eastern”.

ISSD director Ali Sadr said, “It’s derogatory and it’s colonial. East of what? In the middle of where?

Ali Sadr is also the founder of Peyk magazine, which researches and writes about Iranians in America.

During the Iranian revolution, many families left their homes in the late 1970s, including mine. This is when on forms like the census, the government would recognize Iranians and other surrounding countries as “white.”

We were all grouped together in the so-called “white” majority. But if you ask anyone from that region, most will say they didn’t feel part of the majority.

“So we started pushing people to say ‘other’ and add Iranian-Americans,” Sadr said.

But as Sadr points out, by marking “other” on the census, we still don’t know how many Iranians or other people from that region are in America and San Diego.

People are also missing out on some of the minority benefits, such as small business support, college admissions, various protections, and scholarships.

But many Iranians who are here are working hard to assimilate while cherishing their culture.

To know Iran is to know dance and music. Atoosa Emami is a dance teacher and she thinks “we can show our culture and all the different regions of Iran”.

“For me, it’s very emotional because I started performing in Iran,” said Ila Darafshandar from Ila Dance Academy.

And now, sharing this art form in the United States is a privilege.

Mahnaz Khazian said: “I have lived in the United States for 30 years and I am so happy that we have this privilege.

Because if many hope to be counted in this country, that will certainly not prevent them from proudly leaving their mark.

And on a personal note, I struggled with kind of an identity crisis growing up. The person I was at school was different from the person at home. As I got older, I learned to appreciate the many layers of my identity. Now I look back feeling so grateful for the many hours I spent with my family having tea or cha-i, remembering to speak only Farsi at home, dancing at every party, savoring the best homemade meals and to celebrate all our holidays. and traditions.

I hope to share the same customs with the next generation.

Sadr said, “A lot of kids see they are on TV and there is nothing wrong with me. I am part of this group. And it creates this strong community and gives them a sense of belonging and a sense of identity, so I appreciate your help (to CBS8.)”