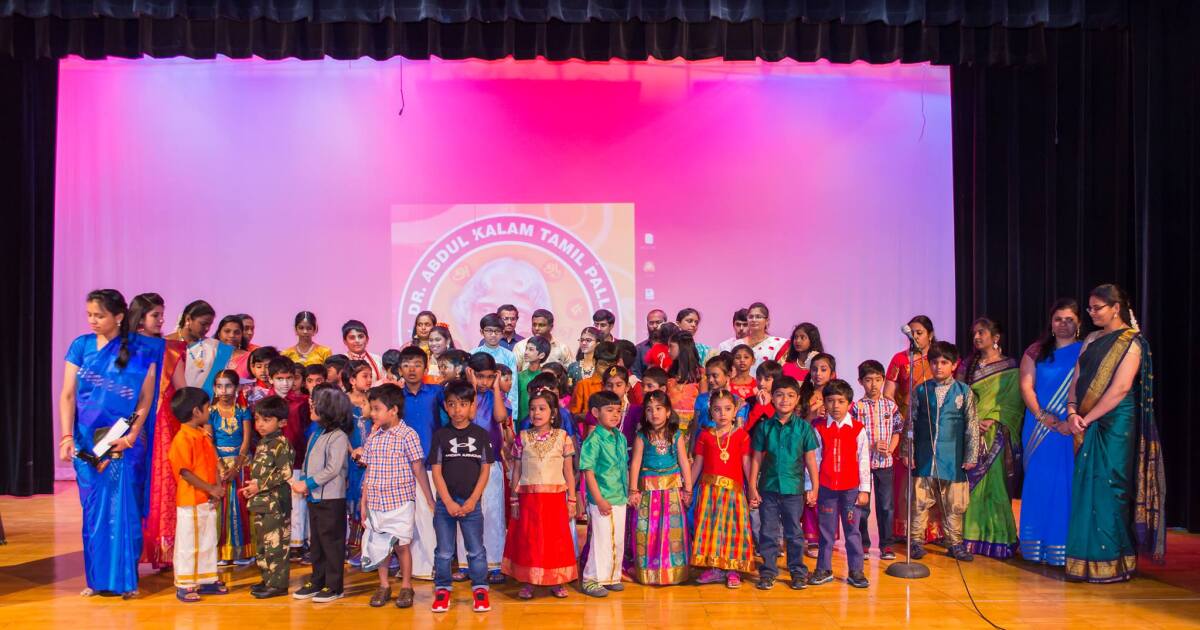 For just over an hour and a half every Saturday morning, Sowmia Janakiraman remembers her home.

It’s been six years since Janakiraman left his home in India, but these Saturdays the place that is thousands of miles away seems a little closer.

It’s Saturday that parents, mostly of Indian or South Asian descent, bring their children to the classrooms of District 87 in Bloomington, where they learn one of the oldest languages ​​in the world: the Tamil.

“Every time I go to school, everyone around me is Tamil, and we talk about our festivals, our culture,” she said. “It’s like being in a mini-India for at least 90 minutes.”

To be clear, the program is not a District 87 sponsored program. Rather, the Bloomington District allows this non-profit school to use a building on Saturdays to teach Tamil.

Although it is, technically, a language school, its objective and its existence go far beyond the simple transmission of a means of communication.

“There is a saying: if you kill a language, you kill this culture,” said mother Uma Balakrishnan. “It’s our passion – we want our mother tongue to live on and we build that passion for our children because we don’t want our future generations to lose the culture.”

To speak Tamil is, at least in some ways, to relate to Tamil culture, an identity that can be lost in the United States.

“The identity crisis is huge here, especially for us immigrants who come here and ground our lives,” Balakrishnan said. “After the time, the children are confused because at home you are Indian. At school, you are not. Who are you? [an] Indian who speaks Tamil.'”

At first, the school started with about 30 children. Now organizers say they average around 60 to 70 students each school year, although there are around 80 this year.

Education can begin when children are as young as preschoolers and continue through eighth grade. The materials are from the International Tamil Academy in California, which is accredited by the Western Association of Schools and Colleges.

It’s intentional: When determining the best way to set up the school, Balakrishnan said organizers watched others near Chicago create their own curriculum. The resulting challenges were training new volunteers or bringing in new students at different skill levels.

“Where we have had a lot of success is with this affiliation,” she said. “We are not fighting for volunteers. Even if we had to have 100 more children, we could bring them in without any problem.”

Additionally, the curriculum used by AKTP includes testing – something Balakrishnan said she felt more positively about than her daughter, a student at the school.

“My daughter was very upset – she said, ‘Why did you have to choose this system?'” Balakrishnan recalls with a laugh. “I think there is seriousness with a test. Otherwise, you just read and move on, but the test puts a check on you and the parents.”

That might sound like a lot of extra learning for kids after a full week of school.

Even though classes at AKTP last about 90 minutes, there’s always the part of getting up and getting there to go to school.

“Every week, no matter the situation, I rush to Tamil school – I want to see all the children,” she said. “As soon as you enter the school, it seems like a good environment. Watching the children makes me [feel] so bright.”

Her son, however, questioned the need to get up on Saturday mornings and work at the Tamil school.

“He said, ‘Why should I learn Tamil?’ I said, ‘You must be proud to say that I am a Tamil and I know [the] Tamil language.’ I keep telling him,” she said.

Janakiraman’s daughter feels the opposite: she is young, in the group of pre-school learners, but she already senses the potential of learning Tamil.

“She is now very much looking forward to visiting India,” Janakiraman said. “She excitedly asks if everyone around us will speak Tamil. It’s a big change I see in her.”

ATKP is not the only organized effort to impart a Dravidian language to Bloomington-Normal.

There are at least two, with another serving as a branch of SiliconAndhra ManaBadi, teaching Telugu to its students.

Like the International Tamil Academy, this school also has its roots in California. And like ATKP, this local school was born out of parents’ desire to teach children about themselves – not just a language.

“I was the parent of two children who had language difficulties communicating with their grandparents and relatives in India,” said school coordinator Jay Tummala. “They have no problem with English because that’s what they live and breathe in this country. But when it comes to their identity as an Indian, Telugu child, they haven’t been in able to identify it.”

And so the Telugu language school in Bloomington-Normal was born about 10 years ago. Like ATKP, it started with around 30 kids before peaking pre-COVID at 100.

“Obviously, a lot of people don’t realize the importance of passing on the heritage that is called one’s mother tongue. I think that’s the best gift you can give your children, other than your last name. .”

It also runs entirely on volunteers, mostly parents who want their children to not only learn a skill, but build a sense of identity.

“The Indians – most of them, but not all of them – were divided according to the language they spoke and the language is your identity,” Tummala said. “So if you come here and say, ‘I’m from India, I’m a Telugu,’ but you don’t speak Telugu, then who are you really?”

Still, not everyone is convinced the investment is worth it, especially when most people are busy flying from kids event to kids event.

“We have huge potential in town as there are so many Telugu families who could benefit from it,” Tummala said. “But I think the biggest thing anyone would ask is, ‘How is this going to help our kids? Obviously, many people do not realize the importance of passing on the heritage that is called one’s mother tongue. I think it’s the greatest gift you can give your children, other than your last name.

Tummala said Telugu school organizers would like to see Unit 5 – the district which he says has the most Telugu families – recognize Telugu as a foreign language, so students can be recognized for their work. done at the secondary level.

“There are school districts in Chicago that recognize Telugu as a foreign language credit and they work with the locals [teaching] centers,” he said. “We hope to be able to do the same locally. If we ever manage to do that, it would be a win-win, because we could reach more families that way. But we need a bit of luck on that front.”

Balakrishnan of AKTP said those attending the Tamil school would also like to see its reach increase beyond what it has already achieved.

“It’s all down to the love of the language. We want everyone to know that we have a school here that teaches kids – not just Indian kids, but anyone who wants to learn a recognized language in Dubai, in Singapore, etc. We run it out of love for the language and we want our children to continue doing so for generations,” she said.

Why we did it

Bloomington-Normal has more East Indians than any other southern Illinois metropolitan community. First-generation Indian immigrants and their children shaped Bloomington-Normal in more or less significant ways, and it deserves our attention. The WGLT Newsroom aimed to measure this impact in an 8-part series of human-centered stories.

how we did it

The Bloomington-Normal Indian community is not a monolith – socio-economically, politically, culturally – and this series aims to reflect that. The WGLT newsroom interviewed over 30 people from a variety of backgrounds. We recognize that these sources do not represent all Indians in Bloomington-Normal. They represent themselves and we appreciate their willingness to share their story.

We want to know what you think of the series and what future features we should consider. You can message our newsroom at WGLT.org/Contact.