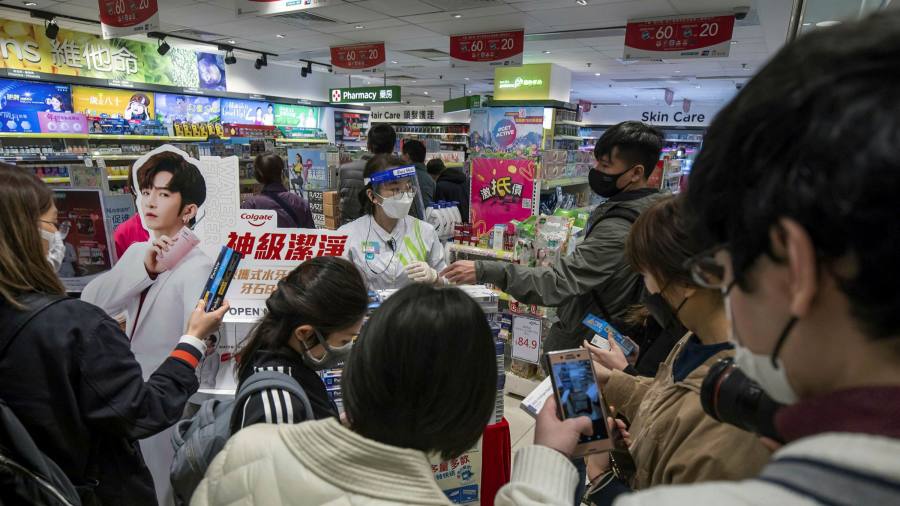 Some Chinese cities have offered rewards for people smuggling information after 15 people illegally entered Zhuhai, in the southern province of Guangdong, by boat from Hong Kong. At least four of them had Covid-19 and later traveled to other parts of China, according to Chinese media.

The cases came within a week when President Xi Jinping said eradicating the outbreak should be Hong Kong’s top priority. Local authorities are already considering mandatory testing for the territory’s entire population, followed by quarantine for anyone infected.

The prospect of tight controls continuing with no end date heightens business fears that Hong Kong’s position as a financial center will be affected by the decision to effectively cut off the territory from the outside world since the start of the pandemic.

On Friday, China’s top government official in Hong Kong summoned real estate tycoons to a meeting where they discussed contributing hotels, properties and other resources to the effort.

The meeting was broadcast live and was conducted in Mandarin, China’s official language, which some of the business executives present struggled to speak clearly.

Anyone arriving in China legally from overseas or Hong Kong must spend two weeks in a hotel or quarantine center before continuing their journey.

Fences and other fortifications along Hong Kong’s long land border with Shenzhen, Guangdong’s second-largest city, were originally built to stop illegal immigration from China into the territory. But it’s relatively easy to travel by boat between Hong Kong and many cities in Guangdong, whose long coastline and river systems are difficult to monitor.

“Mainland cities are concerned about arrivals from Hong Kong,” said Tam Yiu-chung, Hong Kong’s top representative in China’s parliament, the National People’s Congress. “They are concerned that cases will enter their community.”

Lau Siu-kai, who advises the Chinese government on Hong Kong policy issues, said the illegal border crossings could also spark “discontent among mainland Chinese residents and questions about why [Hong Kong] the authorities are not doing enough to prevent this from happening.”

The territory’s own zero Covid strategy, which includes some of the toughest restrictions in the world, has prevented the mass deaths suffered elsewhere.

But several global business groups have moved to temporarily base their top Asian executives outside of Hong Kong due to controls that include a two-week hotel quarantine for arrivals.

Mark FitzPatrick, recently appointed acting boss of insurer Prudential, said the group’s next chief executive could be forced to take up his post from outside Hong Kong due to “friction” from Covid restrictions.

FitzPatrick told the Financial Times he could “absolutely see the CEO being based outside of Hong Kong for the short term until it is easier to be able to run a regional business.” [from there]”.

HSBC, the British bank, temporarily closed six branches in the city on Friday, including several floors of its headquarters, after staff tested positive.

Carrie Lam, chief executive of Hong Kong, announced that elections to elect a new leader would be postponed from March 27 to May 8, indicating that authorities expect the Covid epidemic to persist.

A Hong Kong resident, who asked not to be identified, told the FT that his family of five were considering leaving the territory for Fujian province, where they have a home. “I have been in Hong Kong for almost seven years and have never seen [anything like this],” he said.