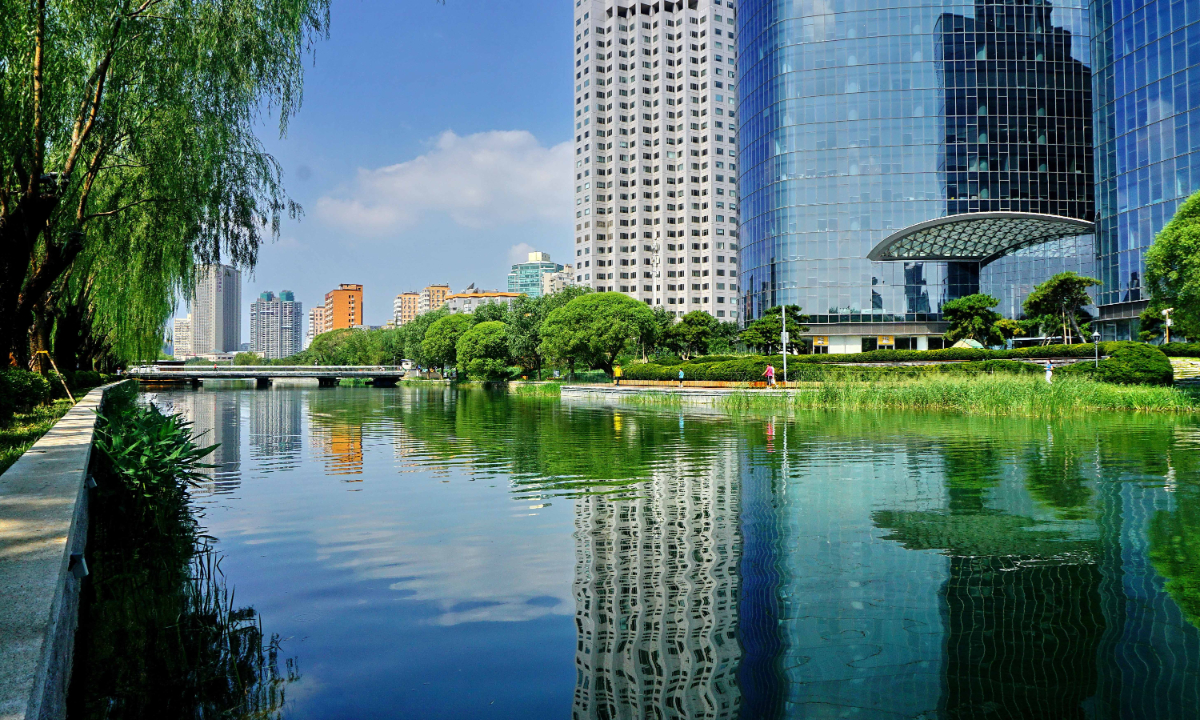 Riding the flat-bottomed river barges that meander through the Liangma River, which is lined with willow trees and reflects the blue sky, many Beijing residents, who have been prevented from traveling due to COVID epidemic prevention measures -19, had the illusion that they were gently gliding along the Seine in Paris.

For a beautiful and charming riverside scenery, the fantastic Liangma River, located in Beijing’s Chaoyang District, has become the most popular scenic spot, perfect for midsummer excursions, for many residents. from Beijing who have been prevented from traveling due to the local resurgence of COVID-19. during the 5 days of holidays of May 1 which have just ended.

Starting from the city moat in the northeast of the capital, the Liangma River flows past embassies and through public spaces and commercial areas. Its total length is 9.3 kilometers; the upper river is a viewing channel while the downstream serves as a drainage channel.

With a history of over 600 years, the Liangma River has earned the nickname “Seine of Beijing” for its idyllic, European-style settings that line its banks. Among these settings, one can find international world cuisine restaurants, bagel shops, cafes, public beach chairs and bistros that reveal the romance behind this side of the capital.

Many young people gather here for picnics during the May Day break to make up for the inability to go on holiday out of town, as the capital steps up COVID-19 prevention measures to tackle the latest outbreak , including suspending citywide dining services and limiting visitor flows to scenic spots and parks. Lounge chairs, coffee pots, chopsticks, fruit bowls and flowers wrapped in newspapers became their props. Just a one kilometer stretch along the Liangma River is home to nearly every aspect of the typical contemporary middle class lifestyle.

Concerns over Beijing’s recent outbreak have not dampened local enthusiasm, until local authorities cordoned off part of the area along the river to prevent large gatherings that pose transmission risks. of COVID-19.

The “Liangma River International Waterfront Area” has been introduced by the district government as an international and tourist-friendly leisure center.

Located near Beijing’s embassy district, the Liangma River has over the past couple of years become a favorite scenic spot for many expats who find the lure of a petty-bourgeois-style lifestyle along the bank.

The lure of the Liangma River is boosting the dynamism of dining at restaurants along the river while boosting the nighttime economy.

Unprecedented prosperity during the holidays

The increasingly strict epidemic control measures did not stop Beijing residents from camping along the Liangma River during the May Day holiday. Among them, expatriates and bourgeois met there for a “pursuit of the exquisite life” along the river.

Posts and images online show that the shore along the windy Liangma River was filled with picnic blankets, lounge chairs and benches under the setting sun. On the table, bottles of wine cooling on ice, highball glasses or fine china teacups next to candles gave off a soft glow reminiscent of the setting sun.

The river bank during the holidays was a hive of activity with people sitting by the river, some quietly drinking coffee and reading, while others worked with their laptops; but many others choose to add an element of quintessentially Western summer pastime to this beautiful scene – picnicking with friends while playing social board games, throwing Frisbees, walking dogs and doing choreography tandem dance.

“After the notice of suspension of gyms and indoor activities was issued, my members immediately discussed the possibility of outdoor classes in our WeChat group. As for where to practice, most of us coincidentally thought of the Liangma River,” Helen Xu, an instructor at a yoga club in Beijing’s Chaoyang district, told the Global Times. During the May 1 holiday, Xu took two small classes of five members to the riverside in the morning for a practice session and to enjoy the summer outdoors in Beijing.

Currently, posts using the “Liangma River” hashtag have reached a whole new high on Chinese social media platforms. Some netizens have summed up 8 things one must do while strolling along the river, such as looking for the mysterious coffee cart, watching the sunset over the suspension bridge with your romantic partner, and enjoying the night view on a boat. 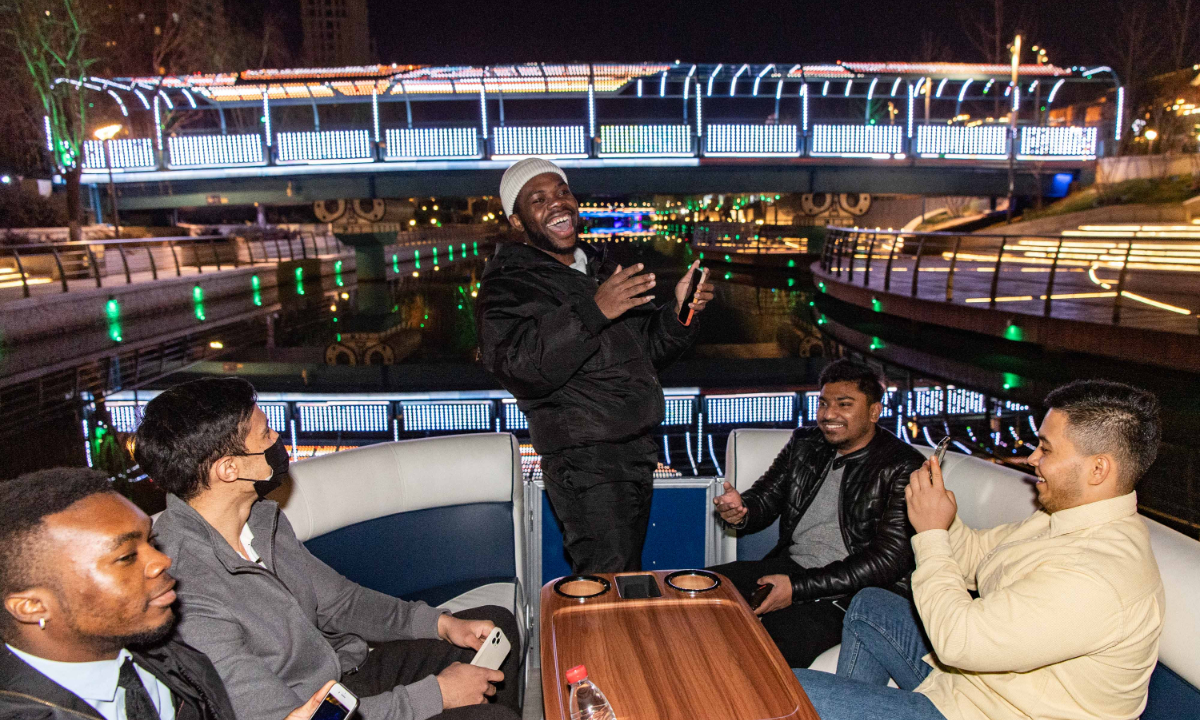 Foreigners enjoy the night view of the Liangma River in December 2021. Photo: VCG

“The Liangma River has always been an artistic area. Some people like to play guitar and sing by the river, while young expats like to congregate here. It’s good to see how this place is so sought after now,” Gou, a 26-year-old Beijing resident, told the Global Times.

However, with the popularity of the Liangma River, the beauty of the riverside “camping” has gradually deteriorated. A slew of photos showed visitors gathered for a picnic, who even had pedicurists pamper their feet along the riverside promenade.

On May 3, local authorities began restricting such crowded picnics due to risks presented by the recent resurgence of COVID-19 in the capital and cordoned off some popular gathering areas.

The audience showed their understanding of the epidemic prevention measures imposed by local authorities. “The purpose of suspending catering activities was to reduce the potential risk of spreading the virus in such close surroundings. A mass picnic is simply moving the gathering place from inside restaurants to outside. There is still a risk of COVID transmission amid the outbreak,” Gou said.

Videos posted on social media show officers patrolling over loudspeakers along the river on May 4, politely dissuading strangers from stomping on the lawn in English.

At present, the adjacent water walkway along the Liangma River has been cordoned off. After that, the frantic bustle subsided, but the river bank still teamed up with the activity of those crossing it.

Lance Le, the manager of 49 Bar & Coffee shop near the river, told the Global Times that currently his home bar business is completely suspended and only sells packaged coffee in the afternoon. But Le said he fully supports the government’s COVID-19 prevention initiatives. “Only by implementing and strictly adhering to these measures can the day of true joint relaxation come sooner,” he said.

Reveal the vitality of the city

While strolling along the Liangma River on a summer night, the Global Times reporter discovered that the interactive fountains, children’s play areas, landscaped water curtains and riverside art installations were inspiring people to stop and take pictures. At the same time, the paths, trees and bridges along the river were installed with magnificent amounts of light.

The landscaped corridor with its emerald green waters and dazzling night sky adds vitality to the business district.

Le told the Global Times that the development and governance along the Liangma River over the past two years has attracted increasing numbers of tourists. The tourist flow doubles during the weekends and the foreign clientele represents nearly half of the tourists. “Many new stores have opened since the end of 2021. The overall quality of life in the metropolitan area along the river is very decent, and the number of high-end hotels along the river is also an attraction,” said Le .

“New York has the Hudson River, London has the Thames, Paris has the Seine, and after the transformation of the Liangma River, China’s capital finally has a decent water system,” Xu suggested. 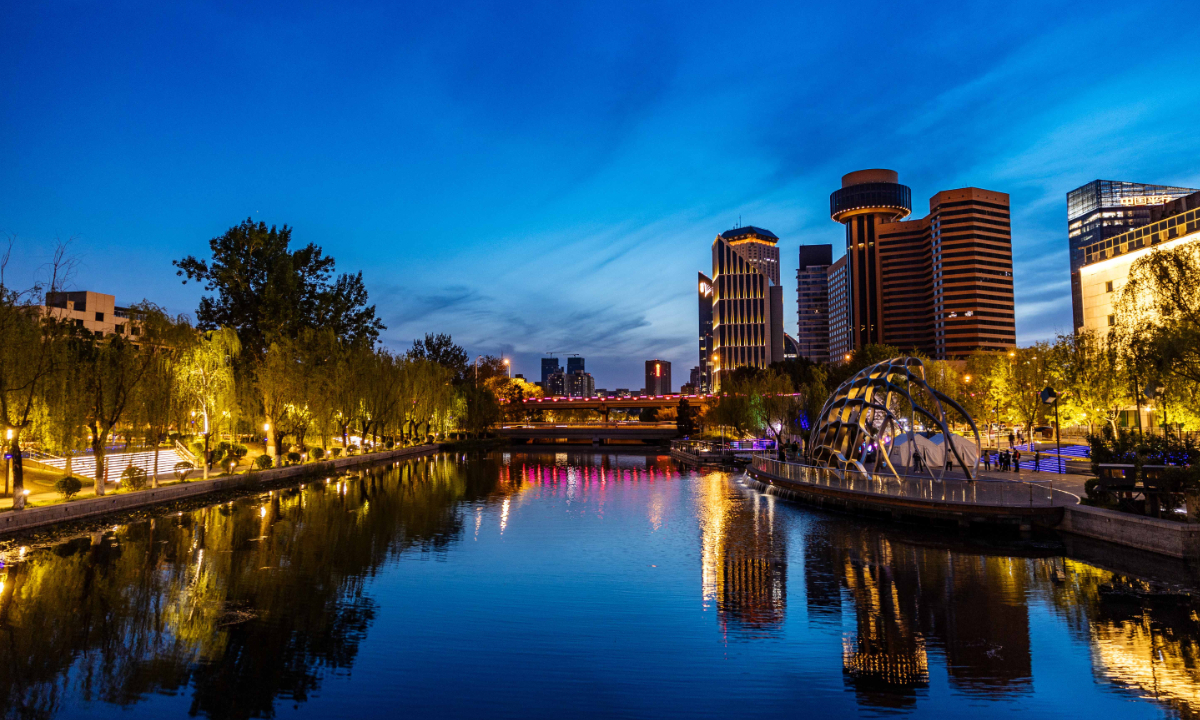 The Chinese meaning of the Liangma River is the river where the horses are exposed to the sun. It is said that in ancient China, some businessmen and guests normally rode their horses here to rest and used the river water to wash their horses. This gave the river the name “Liang Ma (Sunning Horse) River”. Over the years, people have replaced the Chinese character “Liang (Sunning)” with the homophone “Liang (shining)”.

For a long time, the Liangma River was a commonplace tributary of Beijing’s once putrid and mosquito-infested eastern outskirts.

In the 1980s, China’s first Sino-foreign joint venture five-star luxury hotel, the Great Wall Hotel, and China’s first built and operated five-star hotel, the Kunlun Beijinghotel, were built along the river. Liangma. Later, world-renowned retailers and brands joined the foray. In 2019, the local government turned it into an international waterfront park.

“What I love most about River is how its historic culture intersects with contemporary fashion. It’s like combining fragrant tea with aromatic coffee, which is blended to develop a unique charm – a nostalgic culture resting in an energetic city; a tradition that fits into modernity,” Gou said.

The embassy area near the Liangma River is one of Beijing’s three main diplomatic areas. The Liangma River connects some of the city’s most exclusive communities to the business district, and foreign-language signs throughout give the entire length of the river an international feel. It directly introduces the openness, inclusiveness, fashionable nature and livability of Beijing as a cosmopolis.

Cale Holmes, an American expat living about 200 meters from the Liangma River, felt “very lucky” to still have access to the fun community after Beijing suspended dine-in services at restaurants and bars, and closed entertainment venues amid the new outbreak.

“Many friends have gathered to walk, talk and drink there since the holidays. I even met old friends on walks along the river. I even met new friends during the May Day holiday. It’s great for so many things – hanging out, dating, exercising, even just for personal calm. You get a beer, coffee or juice to go and just mingle,” Holmes told the Global Times.

“It’s also convenient because there are plenty of COVID-19 testing sites nearby. Many of my neighbors and friends from neighboring communities can find a testing location nearby and then relax for hours.