How a Monaghan Man Brought Irish Lessons to DC — and America 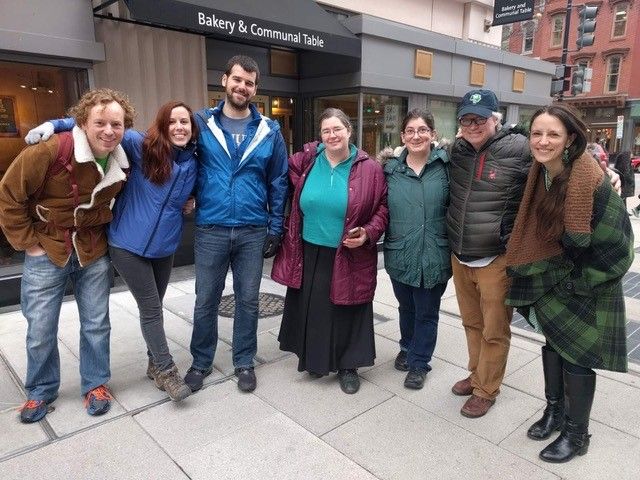 SEARCHING FOR A CLASS AND DISCOVERING A COMMUNITY: Ronan Connolly with Let’s Learn Irish students in the capital

In the nation’s capital, an online community of Irish speakers, Let’s learn Irishfounded by Monaghan native Ronan Connolly, brings the Irish language into the hearts and homes of Gaeilgeoirí across the country – and across the world.

Classes began in 2009 with Connolly teaching six students in a Washington DC classroom before moving to an online community in 2018 – long before the pandemic energized the world of online learning.

Sign up today to receive daily, up-to-date news and views on Irish America.

Connolly’s dedication to the Irish language is unwavering. At one point, he was splitting his time between teaching at his home in Ireland and continuing his Irish lessons in DC. “I would develop tracks online. And then during my school holidays, I would come and do one-off events and workshops, and free classes or events at the Irish Embassy to just raise awareness and try to expand the tent all the time. Classes grew from people coming and enjoying it and their desire to learn more. »

Community is at the heart of everything Connolly and his teachers do. He noticed that many people wanted to learn Irish in many parts of the United States, but did not have access to a teacher or other learners.

“In early 2017 I was developing this proposal for an online language community, like a virtual community really, where you can support those who can’t afford to go to the Gaeltacht,” says Connolly.

A research-based approach to creating classes “to connect, communicate and collaborate trí Ghaeilge” saw Connolly recently submit his PhD to NUI Galway. His meticulous research to create this online community where students receive the best methods and resources for learning the language, has been carefully designed, tested and refined.

“The online element was the way to support others outside of DC who couldn’t access our courses. And you find out there’s a whole world of learners in random places all over the United States.

From that first class of six, Let’s Learn Irish now has ten classes and over 100 learners per week. It’s a huge growth, with learners from across the United States as well as Italy, Romania, South Korea, and, in fact, Ireland.

“I focus on Irish language learners overseas,” says Connolly, “particularly in the United States because that’s where the lessons physically started. We are based in Washington, DC, and I believe we have a duty to support learners who are enthusiastic about learning Irish.

A native of California, Beck learned 14 languages ​​during his undergraduate studies, “and Irish wasn’t one of them,” he says. On a Fulbright in Tajikistan, he began to learn Irish on his own, and upon his return to DC began taking Connolly’s lessons; became a teacher; then went to NUI Galway to complete an MA in Irish language.

Quinton is “an outstanding student and teacher of languages,” says Connolly. “He is an inspiration, both as a student and as a teacher. But he started in class, just like the other students.

Beck, who is not of Irish ancestry, had an interesting introduction to the Irish language, as he first encountered it while reading an apocalyptic fictional book “Dies the Fire” where a character spoke a few sentences in Irish. “And I fell in love with Irish,” he says. “As a linguist, I decided I needed to figure this out. I need to know more.

And so, his Irish language journey began. “And you know, about Irish, it’s very contagious,” he says. “So you watch it for a minute, and it turns into an hour, and then it turns into the rest of your life.”

His students study the language for many different reasons: some have Irish ancestry; some are curious about the language, but, like anyone who learns Irish, he says, “they do it because they want to, because they love it.”

Beck’s affection for the language is inspirational and he promotes the language at every opportunity as he feels that part of the language problem in the United States is a lack of language awareness. “American students don’t know the language, so they don’t look for it when they sign up for classes.”

Thanks to the exciting work of Beck and Connolly, not only are more and more students of all ages and backgrounds becoming aware of the language, but they are learning and using the language in their daily lives. A significant number of people across the states are looking for a class, discovering an Irish speaking community and saying “Let’s learn Irish”.