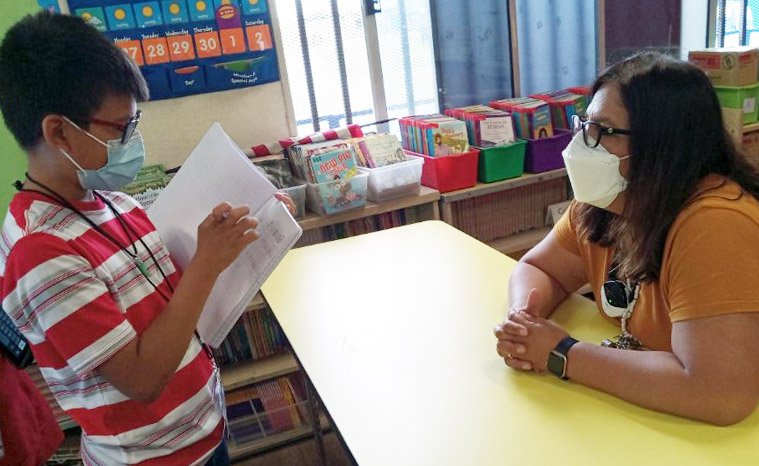 But this summer, the roles were reversed. The students interviewed teachers and coaches and even the principal.

“When we were interviewing people, it felt like we were the taller person now and they were the shorter person,” said 10-year-old Camilla.

This was especially important because, in the past, Camilla hadn’t always felt confident enough to speak publicly.

“Sometimes I get put down, because I can’t really talk to people. I get nervous,” she said.

The Journalism for English Learners course is a creative approach by the Compton Unified School District in Los Angeles County to help students master English faster. The district started the program about six years ago as an after-school journalism club, based on a program designed specifically for English language learners by Loyola Marymount University.

“One of the areas that English language learners struggle with is reading and writing,” said Jennifer Graziano, director of English learner services at Compton Unified. “Rather than having the same type of interventions where they practice skills, we wanted to do something more innovative.”

Graziano said the district has seen growth in writing and other language skills among students who have participated in the program over the past few years. The program won a Golden Bell Award from the California School Board Association in 2019. Last year, the district was unable to offer the after-school program due to staffing issues, Graziano said, so the instead, they offer a six-week summer program. serving approximately 130 students.

Camilla and all the other students in her summer journalism course speak Spanish at home and strive to become fully bilingual. All students in the program are in grades three to five, and most of them have been in school since kindergarten, but they are not yet proficient enough in the English language to pass the English proficiency test. ‘State. They therefore still have to take additional courses for the development of the English language.

“We really don’t want them to leave elementary school and go to middle school still needing so much support from that department,” said Hatchett, one of two teachers in the Learner Journalism Program at English this summer in Compton.

Research shows that most students who speak a language other than English at home become fluent in English in about six years. But some students take longer. Students who have been attending US schools for at least six years but who are not yet proficient in English and who have not made progress in two years on the English Proficiency Test are considered long-term English learners in California .

These students are at risk of missing out on the academic content of middle and high school classes if they do not receive additional support. They may find themselves behind in university courses and excluded from electives because they still have to take English lessons.

During the school year, Hatchett teaches fifth grade, and she sees many of her English-learning students struggling to speak and participate in class.

“Even those who are fluent in, you know, conversational terms are often kind of closed off and just don’t really want to try it, even though they have the ability,” Hatchett said.

Experts have urged school districts to do more in the pre-college years to help students master English earlier so they don’t become long-term English learners. At the same time, experts say districts need to ensure they give English learners access to rigorous content, in addition to the English language.

The Journalism course does both, and it’s a particularly useful subject for English learners. To be a journalist, you need to hone skills such as listening, public speaking, clear communication, reading and summarizing, and writing – the same skills you need to learn a language.

Summer journalism classes are small, with groups of eight children each, which helps Hatchett give more individual attention to each student and helps students feel more comfortable and confident speaking in front of the audience. others.

“That’s the first thing. You don’t have as many students that you take risks in front of,” Hatchett said. “Number two, I’m really pushing you more than probably the average teacher who has 34 students and has seven subjects to teach.”

In higher grades, Hatchett says, “If the quiet ones don’t talk, then they just don’t talk. In my case, everyone has to interview at least one person. And I make speaking a big part of the teaching.

First, Hatchett brought in local newspapers, both Spanish and English, including La Opinión and the Los Angeles Times, for the students to read.

Next, she focused on language practice, teaching students the fundamental journalistic skill of interviewing.

“I taught them oral comprehension techniques. It’s number one,” Hatchett said. “It was very important to get them to take notes and listen to what I say. You have to follow me because I’m going fast.

The students decided together who they wanted to interview. This summer, the students interviewed teachers, a principal, a coach and a group called Team Kids, a nonprofit that visits schools to “empower kids to change the world,” according to its website.

Before sending them to interviews, Hatchett had them rehearse. She was pretending to be the person they were going to interview, and they had to practice asking her their questions.

“One of the hardest things for everyone was actually articulating your question, whether it was a good reader or not, because of trust,” Hatchett said.

Overcoming the fear of speaking in front of other people – having more confidence – is very important for students learning English. It can erode a student’s confidence to learn year after year that they have not learned English. Many of these students learn to shut up and stay under the radar. Sometimes, in large classes, these students are neglected and don’t get the attention they need.

Hatchett students said they were nervous before conducting the interviews.

Adrian, 10, said it was difficult because the room was so quiet.

“Having all this silence kind of made me nervous because I’m used to loud noises,” he said.

Once they have completed their interviews, they write articles about the people they interviewed, and they publish them in an online journal. They also recorded a video news show.

Students said they loved the course and learned a lot, especially in English.

“I learned to overcome my fear of talking to someone on camera,” Alison said. “I learned more about how to speak properly…and I learned how to make my writing better and more exciting.”

“I learned to type fast and think of new ideas every day,” said 10-year-old Ayleen. “I stuttered a lot and now that I am interviewing I feel very confident and better with my words.”

“My English was pretty awful, but now that we’re typing a lot and talking a lot and interviewing people, I’ve learned to put more vocabulary into my English,” Camilla said.

Hatchett students say they will use these skills in fifth grade this fall. In the future, they dream of becoming teachers, lawyers, doctors or managers of a large company. Adrian said there was a 60% chance he would even become a journalist.