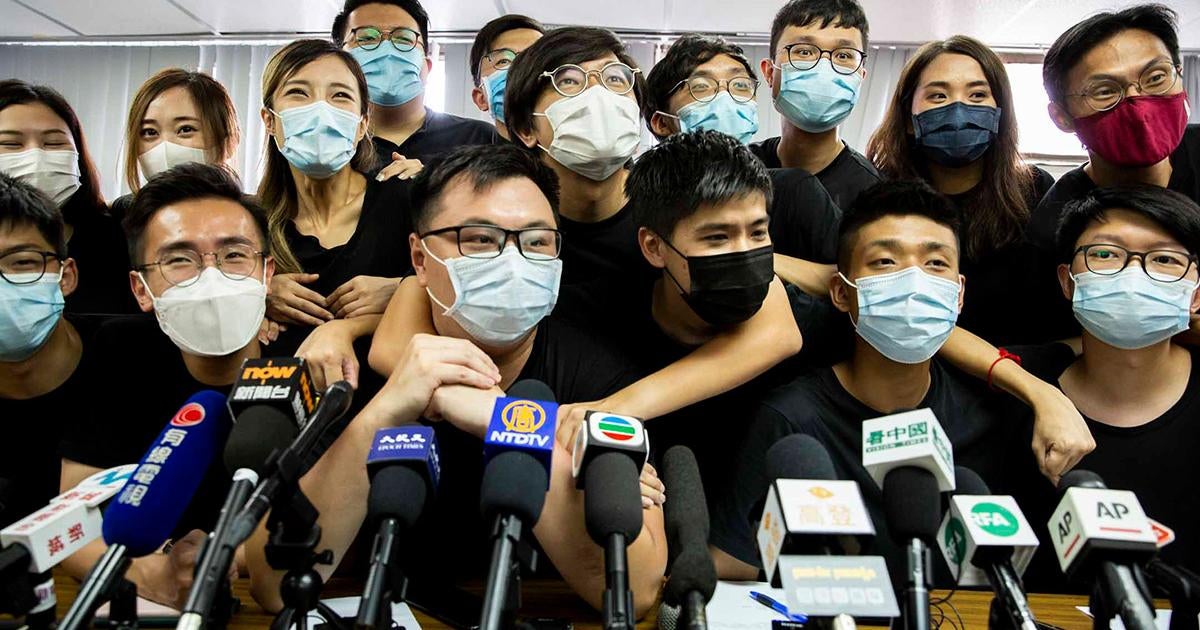 (New York) – Hong Kong authorities should immediately drop politically motivated charges and release 47 prominent elected lawmakers and activists charged under the abusive national security law, Human Rights Watch said today. Following the lifting of the media ban on August 18, 2022, it became public that the prosecution had named five of the defendants as “major organizers”, which suggests possible severe sentences, which could go as far as life imprisonment.

Lawmakers, protest leaders, trade unionists and academics, aged 24 to 66, are being prosecuted for “conspiracy to commit subversion” for their peaceful political activities. The five named as the main organizers are Benny Tai, a lawyer; Au Nok-hin, a former legislator; Chiu Ka-yin and Chung Kam-lun, former district council members; and Gordon Ng Ching-hang, an activist. Many aspects of the detention and trial proceedings violated international due process standards.

Under Article 22 of the National Security Law, “a principal perpetrator” faces a sentence ranging from 10 years to life in prison. It is unclear whether the court will treat those named as the main organizers as the main offenders. Those who “actively participate” risk between 3 and 10 years, while “other participants” risk less than 3 years or “short-term detention or restriction”.

On August 18, a Hong Kong magistrate lifted restrictions on the media for reporting on the pre-trial proceedings in this case, two weeks after the High Court ruled in favor of a defendant in another security law case which held that the magistrate’s refusal to lift the media ban was unlawful.

News organizations reported after the ban was lifted that 29 defendants had indicated their intention to plead guilty to charges of “conspiracy to commit subversion”. In Hong Kong, a guilty plea usually results in a one-third reduction in sentence.

The 47 defendants helped organize or present themselves as candidates in an informal July 2020 opinion poll to coordinate pro-democracy candidates for a legislative election, then scheduled for September 2020. They sought to win more than half of the legislative seats, in a bid to exert pressure. the governments of Beijing and Hong Kong to grant universal suffrage to the people of Hong Kong, as promised for a long time.

The prosecution’s 139-page summary of facts focuses on the writing, speeches, fundraising activities and coordination between the 47 defendants during this process, which it says was intended to “cripple Hong Kong government operations”. It accuses Tai, for example, of writing an article that “aimed to unleash a bloody crackdown, leading the West to sanction the Chinese Communist Party”, and claims that “by damaging the operations of the legislature, [Tai] planned to overthrow state power and overthrow the government.

Subversion and other crimes established by the National Security Law, which the Chinese government imposed on June 30, 2020, are overly broad and applied arbitrarily, Human Rights Watch said. They include the peaceful exercise of human rights which are enshrined in Hong Kong’s de facto constitution, the Basic Law. These rights are also protected by the International Covenant on Civil and Political Rights (ICCPR), which is incorporated into Hong Kong’s legal framework via the Basic Law and expressed in the Bill of Rights Ordinance.

On August 16, Justice Secretary Paul Lam ordered a non-jury trial in the case, a break from the tradition of trial by jury for criminal cases heard in the Hong Kong Magistrate’s Court.

The denial of a jury trial is among several provisions of the Security Act that deprive defendants of their rights to a fair trial. The law establishes a separate channel for those suspected of national security crimes for investigation, prosecution and trial. It provides for a special police unit to investigate and deal with political crimes and a special team of prosecutors and judges handpicked by the justice secretary and the chief executive, the latter in turn handpicked by Beijing. In the case of the 47, the Chief Executive has appointed three judges who will preside over the case. Under the security law, defendants can also be deprived of a public trial if state secrets were leaked.

The security law also denies bail to suspects unless the judge is satisfied they are not committing national security offences. Many of the 47 defendants have been detained for nearly 18 months since police charged them in late February 2021. The law’s presumption against bail, regardless of the seriousness and nature of the alleged offenses, is inconsistent with the presumption in favor of bail and the presumption of innocence in Hong Kong’s common law tradition and under the ICCPR.

A Hong Kong lawyer who was previously part of the case’s defense team expressed concern that prolonged detention could cause some defendants to “lose their will to defend the charges” and “to plead guilty at the first opportunity”.

Preliminary proceedings in this case began on March 1, 2021, and the next hearing will take place on September 1. Hong Kong authorities repeatedly denied consular access required by international law to Gordon Ng Ching-hang, an Australian citizen, during his lengthy pretrial detention, media reported.

The national security law is at the heart of Beijing’s most aggressive attack on the freedoms of the people of Hong Kong since the transfer of sovereignty in 1997, Human Rights Watch said. Since its imposition, fundamental civil and political rights long protected in Hong Kong – including freedom of expression, association and peaceful assembly – have been rapidly erased. Authorities arrested nearly 200 people under the law and prosecuted more than 110. Ma Chun-man, an activist who was the first person convicted under the law, was sentenced to five years in prison for “incitement to secession”.

Although the United Kingdom, the European Union and Australia expressed concerns about the charges against the 47 defendants, and now have new human rights sanctions regimes, they have not imposed targeted sanctions on Hong Kong officials responsible for rights abuses. In May, more than 100 Members of Parliament and their peers in the UK issued a joint letter urging the UK Foreign Secretary to draw up a list of those responsible for human rights abuses in Hong Kong.

“Relevant governments should demonstrate their commitment to democracy and human rights by punishing officials who violate the fundamental rights of the people of Hong Kong,” Wang said. “International actions will bring comfort to those who have already sacrificed so much simply by doing the right thing.”