Fallacy one nation, one language 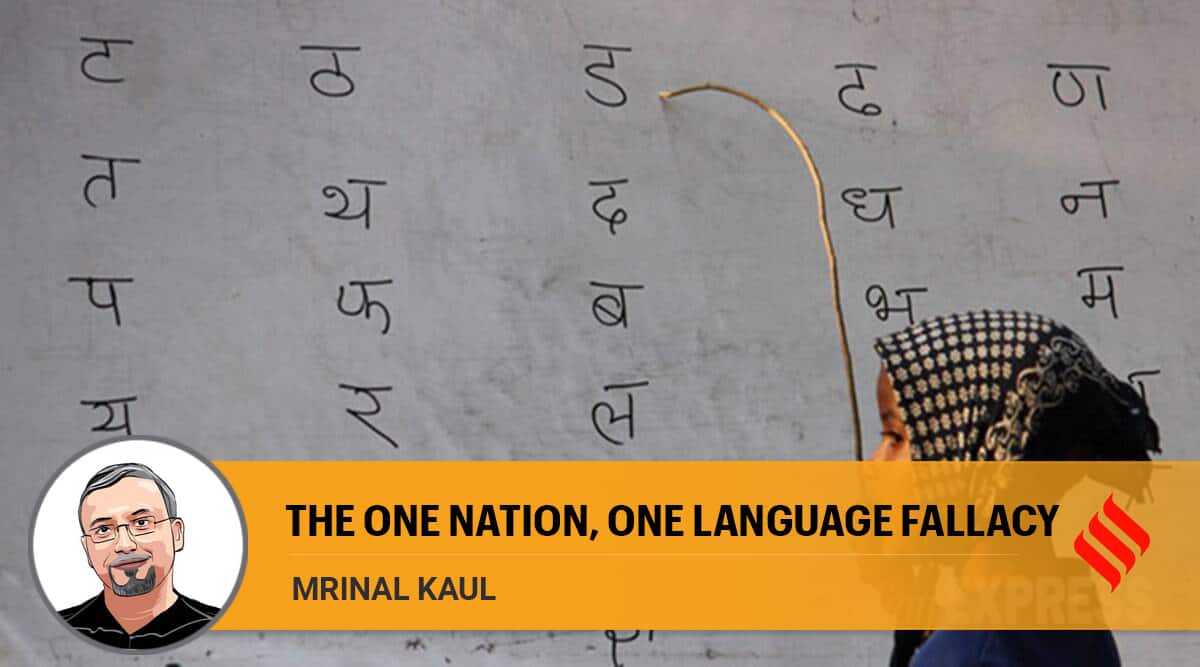 (My conviction is so strong that I do not fear the kindling of others, but indeed I dread the flame of a flower (in my own garden) lest it kindle the garden (itself)) .

In recent days, I have often found myself reciting, in my head, the above lines of the poet Shakeel Badayuni. If there is a Bharat Mata (Mother India), she is likely to agree with the sentiment expressed in these lines. Her inflexible and unruly children have innocently robbed her of her multifaceted glory by imposing on her a certain ill-informed and ridiculous linguistic monism. A mammoth is reduced to mink.

I grew up speaking Kashmiri. I think of Kashmir because that’s how I grew up. I have Kashmiri friends and relatives who speak Kashmiri better than me and others speak terrible Kashmiri. I don’t know when I learned Urdu growing up in the Kashmir valley. When I first came out of the valley as a child, I realized that I spoke to people around me in Urdu although they called it Hindi. However, when I met people from the Hindi belt, I first wondered why they spoke like characters we saw on TV in Ramanand Sagar’s Ramayan or BR Chopra’s Mahabharat. I used to laugh at some of my friends and ask them why they couldn’t speak in a normal language, not realizing that it was probably normal for them. And they, in turn, kept taunting me that my language resembled Farsi (Persian) and therefore very foreign to theirs. It was a linguistic pleasure and we enjoyed it.

In a few years I was to be trained as a Sanskritist and started dealing with the idea of ​​languages ​​professionally. I gradually deployed the power dynamics and identity issues related to languages. I remember a few times I felt severely discriminated against, along with a few other friends, while walking around Connaught Place in New Delhi at the hands of a few street vendors because we were speaking in Kashmir. I also gradually became aware of how the Kashmiri language had suffered in its native country from the dominance of Urdu (the state language) in the same way that so many other South Asian languages ​​are dominated by Hindi. The problem is not Hindi or Urdu or their wonderful literary traditions or the native speakers of these languages. The problem lies in the romantic notion of “one nation, one language” – the power that is wielded by the imposition of one language from a vast geographical area of ​​South Asia over the length and breadth of this multilingual landmass.

The line between love and hate is usually very fine, but it can also be quite simple. I like languages ​​of my own free will and according to my taste, but I would start to hate them if they were imposed on me. I love my Urdu, but I don’t like Urdu which was created to kill my mother tongue. One of the main reasons for the partition between West Pakistan and East Pakistan – later Bangladesh – was that the former imposed Urdu on the latter. The former was mainly a Punjabi-speaking region and the latter was a Bengali-speaking territory. Urdu as a concocted Islamic category was designed to mediate between the two distinct cultural areas and unify them under a single imagined Islamic linguistic umbrella. It was to be a dismal failure. In other words, the idea of ​​a national language sounds wonderful, but only on a Wikipedia page. Language is not a symbol of representation like a flag; it is a dynamic reality. Even if a multilingual nation like India becomes monolingual, over time it will gradually create many distinct dialects. This is the linguistic reality. Curiously, India could end up with hundreds of Hindis, but all unique in themselves.

India should have a strong language policy that emphasizes quality language learning rather than running language departments, both classical and modern, in almost all of its public universities. Many of these departments make no contribution to scholarships anyway. Questions related to language learning are always diverted by easy questions: how many languages ​​or which language should be taught. There is never a solid focus on how to study the language structurally and systematically. There can be no greater irony than this for a multilingual landscape like South Asia.

I have to admit, I still wouldn’t mind the jokes we used to make about languages ​​when we were kids, but I have issues with linguistic hegemony — my mother tongue succumbed to it.

The writer teaches philosophy at the Indian Institute of Technology-Bombay, Mumbai.