Fall 2021 graduates make the most of their time at FGCU 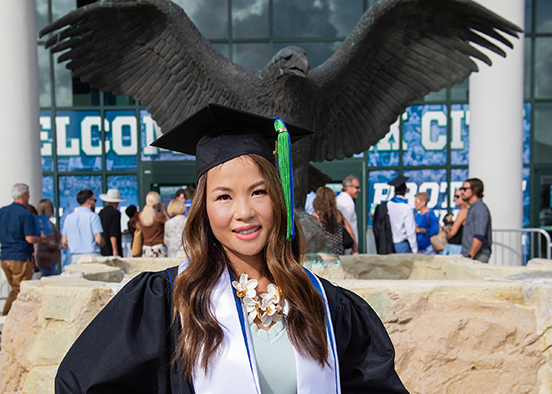 When it comes to student success, it is not easy to paint a representative picture of the talent of a particular promotion. Out of more than 1,000 degree applicants in December 2021, a few have risen to the top as examples of accomplishments that have helped define the new class of FGCU alumni. All of these Eagles have one thing in common: They made the most of their opportunity.

In September, she signed a one-year contract with Lee County Schools to teach a third-grade class at Franklin Park Elementary School in Fort Myers. As an education major, Brevil applied to be part of the requirements-laden Student Teacher Advanced Recruitment (STAR) program. This made her a full time teacher before she graduated.

Hailing from Broward County, Brevil always knew she wanted to be a teacher. At first, she wasn’t sure FGCU was the right place for her, but that has changed. The STAR program helped her make an important decision in her life.

“I feel at home here,” she said of Fort Myers. “I see myself continuing to Franklin Park. I have one of the best mentors in the district. Learning from her, being in class and gaining that experience doesn’t improve.

According to the Florida Education Association, there were 4,961 vacant teaching positions in the state as of August. Despite the challenges teachers face, from salary to pandemic, Brevil is happy with her decision. She is living proof that programs like STAR can help fill vacancies in local school systems.

“Some people might consider stress [that comes with teaching] and decide they can’t do it. But, I look at him like, ‘I want to do this. I will do it and I will do my best to do it.

Like Brevil, some students believe they did not initially find a “home” at FGCU. This was the case for Michaela Clarke. A bad experience with chemistry almost drove her to give up higher education altogether.

“My first semester didn’t go so well,” said Clarke, who was returning to college after a three-year hiatus since earning an associate degree. “I took my first chemistry exam and I really failed. I was like, ‘Well, that doesn’t seem to be for me.’ “

“I shed a lot of tears in his office that week,” said Clarke, first generation Susanne and Larry Pickering scholarship recipient. “Dr. Paikoff said she saw a lot of potential in me and knew I could work hard.

That was all the motivation the Jamaican-born student needed. Clarke went from a failed chemistry student to a teaching assistant in the department. She also participated in the Student-teacher partnership program with the Lucas Center for Faculty Development. The program pairs students with a faculty partner. Together they work to improve the way a particular course is taught.

Bill Reynolds, who leads the program, said: “Michaela has been in this program for several semesters and as a student she has an unusual maturity and a real depth of knowledge of teaching and learning at the University. FGCU. “

This maturity comes as Clarke applies to graduate schools to continue his studies in forensic science. No matter where she goes, the former student will not forget the FGCU.

“I don’t think I could have accomplished everything without such a great support system and community,” said Clark.

Lily Boone also found people at the FGCU who supported her as she won it finance degree. The mother of two is from Vietnam. At 17, with only a ninth grade education, she started her own business importing clothing from Western countries to her native country. She continued to support this business when she moved to the United States

“I worked to get a high school diploma,” said Boone, who learned to speak English after arriving in the United States. She enrolled in a college in Nevada, but her husband’s work moved the couple to Naples. While raising her children and running her business, which still operates today, Boone earned her bachelor’s degree.

After graduating, she is now considering taking the Chartered Financial Analyst exam and looking for a job in her field. More than anything, Boone wants his story told. She thinks it will help other people who are in a similar situation.

“If they work hard enough and believe in themselves, they can make their dreams come true. Even though it is not an easy road to walk, if they work hard, nothing can stop them.

Boone’s feelings are all too familiar to Viktoriya Bardenova. The Bulgarian-born FGCU graduate has become a superstar in the mathematics department. Consider this statement from a student in a calculus class where Bardenova was a learning assistant: “She behaves and teaches like a professional teacher would. I fully understand everything she teaches.

Praise like that is fine, but one also wonders where Bardenova might be if her initial plans worked. In 2004, she was to start school at a reputable university in the United States. But, according to one of her professors, “They made a mistake with her immigration papers and she lost a promised scholarship.” As a result, Bardenova postponed her plans for higher education, took a job and learned a second language, English. She also started a family.

FGCU math professor Katie Johnson wrote: “Maybe it’s because I started college the year before. [her] that Viktoriya feels more like a colleague to me. If life had been fairer, she and I might have taken the same graduate program or worked in the same department by now. “

Always pragmatic, Bardenova does not see the delay as a waste of time. She can’t wait.

“It is what it is,” she said. “There are things that cannot be changed. But I’m a little late. So, now I’m trying to do my best to get back on track.

Bardenova applied for graduate studies with the intention of obtaining her doctorate. a little after.

“I have the passion to ultimately teach. I want to help people like me, ”said Bardenova, recipient of the Elizabeth N. Barrick Fellowship.

Even though FGCU was not part of her initial plans, it became the perfect place to help her get the math degree she always wanted.

“I cried when I moved my glans from side to side,” Bardenova said of her experience at Grad Walk. “I love the FGCU. I felt very welcome and I feel very lucky to have been able to study at FGCU.

A path inspired by life

Like some of his classmates, Bryan Ortega, a December 2021 graduate, knows the challenges of learning a new language. His family moved to the United States from Colombia, and Ortega grew up speaking Spanish with his mother and grandmother. His connection to the latter and his health problems helped him to go to the FGCU Marieb College of Health and Social Services.

“We were constantly in and out of clinics,” Ortega said. “I was in college when I first had to learn how to give her insulin and take her blood pressure. “

Helping her grandmother gave her access to her providers. He asked them questions about medications and treatments. His interest in medicine increased, which led him to obtain a degree in Health Sciences.

“I fully intend to apply this year to medical school,” said Ortega.

The first-generation student has already been accepted into the University of South Florida’s master’s program in public health, which includes a concentration in global infectious diseases. Ortega is clearly an attractive candidate for schools and employers, but this is only one facet of his accomplishments.

“Since I was young, I have always been fascinated by language and culture,” he said. “When I was in college, I wanted to learn French, so I started to learn on my own. In high school, I was able to take a few French lessons and take part in a study trip abroad. When I got to university, I ended up doing a minor in French.

It’s easy to imagine a future when “Dr. Ortega” returns to Southwest Florida ready to work in public health. Ortega says he wants to focus on helping vulnerable populations. Think of the good he could do, and then add the fact that he is trilingual. For an area rich in English, Spanish, or French speaking people in Haiti, Ortega may be just what the doctor ordered.