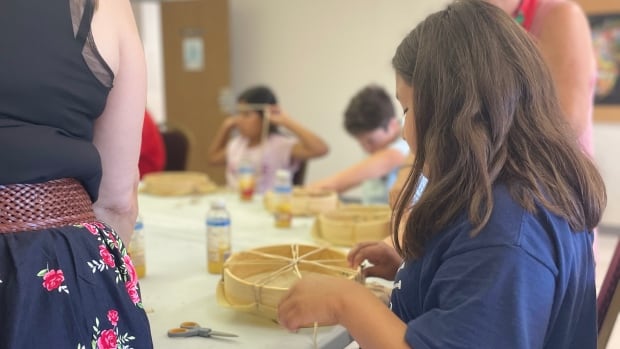 Karen Somerville of Esgenoôpetitj was teaching a table of children how to string moose hide through a wooden drum frame when a child began rhythmically clapping her hands on the table.

Soon they were all joining us, small voices filling the room, singing in Mi’kmaw as they stretched wet moose hides over the drum frames.

In the crowd were three generations of camp organizers, including Candida Nickerson and her family. Her son, Damon Nickerson, was learning Mi’kmaq and his mother was teaching alongside Sommerville.

“I love how engaged the kids are. For me, that’s my favorite part so far. They come here with the best attitudes, they’re so proud of them,” Nickerson said.

The Esgenoôpetitj Immersion Camp is for children ages 8 to 14 and is part of Three Nations Education Group’s efforts to support First Nations language learning.

“I’ve never had to make a drum before so I’m really excited to make one because I want to take it home and show it to my parents. I know they’re thrilled that I make one,” said Eldon Cruz Taylor who, at 12, is one of the oldest kids in the camp.

His favorite Mi’kmaw word is Wela’linwhich means thank you.

“I guess because I like to say thank you so much to people, I just show appreciation for what people do for me.”

After making their drums, the children headed to the garden outside to see medicinal plants and tobacco. They also viewed a fully translated Mi’kmaw version of Chicken coopwhich Nickerson says is funnier than the original English version.

Somerville has been teaching Mi’kmaq culture to people of all ages for 20 years, but has focused on teaching the Mi’kmaq language for 10 years.

Camp organizer Candida Nickerson says it’s important to pass on the Mi’kmaq language and culture to future generations, especially since they were stripped from older generations by residential schools.

“Seeing kids’ eyes when I tell them that a word can mean an entire sentence is my favorite part,” she said.

“Schools had taught my grandparents that if they kept talking to their kids, their kids wouldn’t be successful. But it’s quite the opposite. It’s part of who we are and we’re sure we are who we are mine…to learn and pass it on to my children,” she said.

Somerville’s mother was also a speaker in her own right and was hidden away during residential school pickups, so she grew up speaking the Mi’kmaw language.

“I think when I was about 18 I started hearing it again among people in the community and I started learning and I made a lot of mistakes,” Sommerville said.

“I can walk away from this camp knowing that these kids had a great time. They were surrounded by people who love and care for them and they learned so much about our culture.” she declared.

Holly Mitchell grew up in Esgenoôpetitj and visited her son at camp. He attends a French immersion school off reserve. Mitchell had never been able to attend a camp like this, so she wanted him to have the chance to be immersed in Mi’kmaq culture.

“When I saw him, I knew I had to enroll my son right away,” she said. “It would have helped revitalize the culture of my generation.”

Mitchell has never made a drum before, but she is happy to know that her son is learning to make one.

Somerville said anyone can learn the language.

“I just want to encourage anyone who has an idea or anything. Contact us if you want to learn the language. Contact our community.”

Starting with children is the first step to revitalizing Mi’kmaq culture, Nickerson said.

“For me it is extremely important to learn my language. If we can start here with our children, then I will be more than happy to run this camp.”