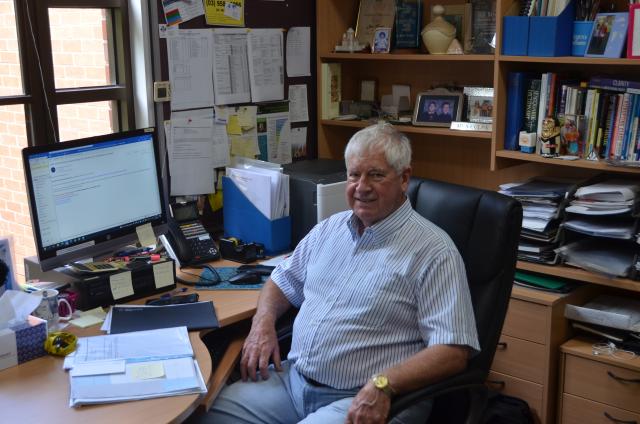 Things are going to be a little different at Thomas Mitchell Elementary School in Endeavor Hills this year.

Each morning when students arrive for another day of learning, they are greeted at the front door with the familiar face and friendly smile of their principal, John Hurley, ensuring they start their day with a smile good at them.

But after 30 years in the hot seat, Mr Hurley, the school’s founder and sole headmaster in history, decided to pull back the curtain on his long and decorated teaching career this week.

It was a recent dose of reality that prompted him to make the decision to call time.

“Two kids I taught got married and I’m still in touch with them,” Mr Hurley said. “They said ‘we have news, we are retiring.'”

“I thought, ‘This is crazy. I taught them in primary school and they’re retiring, but I’m still working.

Mr Hurley started Thomas Mitchell in 1991 after his time at Cranbourne Primary School, with 179 pupils enrolled on the first day to begin their educational journey under his guidance.

A photo of all the staff and students from the inaugural day still hangs in his office, giving him a chance to reflect on how far the school has come.

In 2022, the school has just under 800 students from a wide range of backgrounds, encapsulating the incredibly diverse community in which the campus resides and filling Mr. Hurley with immense pride.

“I’m a big fan of multiculturalism,” Mr. Hurley said. “We have families of over 70 nationalities in the school.”

“I like to go see other cultures and see how they do things. I think we can all learn from each other.

Mr Hurley’s teaching career began at the age of 19 at 10 Mile Creek in the Strzelecki Ranges of Gippsland, immersed in the deep end with 28 children under his watch ranging from preschool through sixth grade in a “unbelievable” condition.

He fondly recalls some of his regular duties that were not part of the standard curriculum, not something he encountered in teachers college.

“The first thing I did in the morning was, because it was cold in there, I was going to cut some wood for the fire to keep the classroom warm,” Mr Hurley said.

“Once in a while the kids would come running up and say ‘there’s a snake over there, someone has to go kill the snake.’

“I got an extra seven shillings and sixpence a fortnight to dig a hole and empty the toilet. It was quite far.

Classrooms in the 1960s were nothing like what they do in 2022 now too; blackboards were always the device of choice, and the isolated nature of this campus meant there was no electricity or phone line available, and everything had to be written in handwriting.

Mr. Hurley’s inspiration to teach began with his love for school as a student and his own thirst for learning.

He combined his love of travel and exploration with youth development working in the UK, and also worked at the former Turana Youth Training Centre, helping the most vulnerable young people who had the most Need help.

As a teacher and school principal, he strived to ensure that learning was an experience for children and something to be enjoyed, rather than a means to an end or a drudgery.

For the kids, that meant a slew of hands-on activities, tours, camps, excursions, and guest speakers.

Working closely with his students allowed him to gather elements from the children through enlightening daily interactions, and above all fostered a solid rapport, breaking down the perceived barrier between the student and the authority figure, which was missing a lot. when his days of teaching in the classroom came to an end.

“I said to a class I was teaching once, ‘look at those crows making all that noise’ – there were birds outside the classroom window. A little boy came up to me at recess and said, “Excuse me, Mr. Hurley, those birds aren’t crows, they’re crows.” I said, ‘How do you know?’, and he said, ‘My father is the government ornithologist.’ »

“You learn so much from children.”

When asked by his current students about the legacy he will leave behind, the trait most often mentioned was his kindness.

Replacing Santa as Christmas approaches and handing out sweet treats on the last day of school of the year is also something we will greatly miss.

Since his announcement late last year, Mr Hurley said he had been flattered by the messages of gratitude and congratulations he had received.

When Star News visited the school to speak to Mr. Hurley and take photos on the spot, a former pupil who was driving through the area spontaneously stopped to shake his hand and congratulate him on his career, before getting back into his vehicle and continuing his journey.

It was an equally fitting tribute and a perfect reflection on his legacy.

Despite the end of his official teaching days, he won’t completely close the door on his academic journey, eager to volunteer at a local English language school interspersed with a return to international travel, reading and sequel to his beloved Collingwood Football Club.

As he prepares to sign his last day on Friday, February 11, he had a gracious message for the community that he played a vital role in establishing it.

“I would like to say a big thank you to the Thomas Mitchell community for making me feel welcome.”

Star News wishes Mr Hurley the best in his retirement.