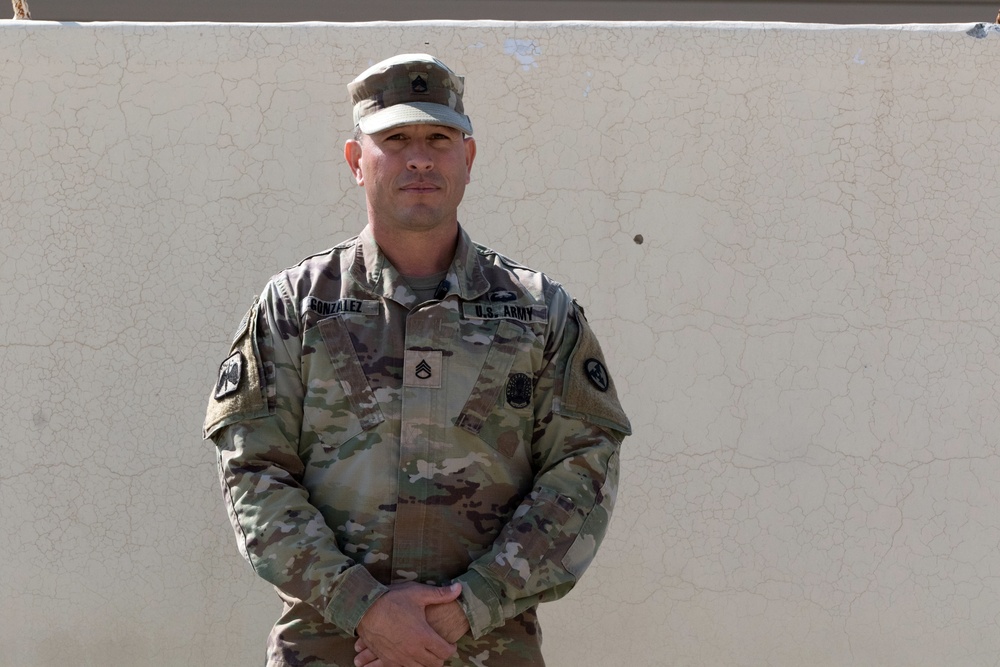 The petroleum supply specialist, deployed here with the 3rd Expeditionary Sustainment Command, has spent much of his adult life teaching; first as an educator on his native island of Puerto Rico, and today as a non-commissioned officer in the army.

“If you can educate people, maybe you can change the whole world,” said Staff Sgt.

Gonzalez took a few moments away from his mission support role with 1st Theater Sustainment Command — the unit responsible for sustainment operations throughout U.S. Central Command’s area of ​​responsibility — to explain why he serves.

Teacher at the troop

Gonzalez smiles as he thinks back to his early career in which he spent four years teaching high school students geometry, physics and calculus. He said he wanted his students to know that math is more important than numbers.

“I was this guy who not only tried to teach math, but I always taught something about how you can use that in your life,” the staff sergeant said. “I think when you can find that meaning in your life – how can I use it for my life, how can it make me a better person, how can I use it to help someone else? other – you see things differently.”

Gonzalez said nothing beats the opportunity to prepare young men and women for the world. He said that every time he returns home to his island, he meets former students who always express their gratitude for the role he played in their young lives.

“It’s something that money will never replace, that emotion when someone is truly grateful for you,” the staff sergeant said. “It’s a very good feeling.”

While his heart was in education, Gonzalez said he also felt driven to serve in the military. He said he was drawn to the military because of the way it was portrayed in movies.

“It was like a passion, it was something that I was trying to be one day,” said the master sergeant. “I was that guy who wanted to wear the uniform to see what it felt like, and [to know] why people are so proud of this uniform.

Gonzalez raised his right hand and enlisted in 2012, and flew to attend the Defense Language Institute English Language Center at Lackland Air Force Base, Texas.

“This is the first mission you have as a Hispanic soldier,” said Staff Sgt. “The army wants to make sure you can really master the language, so I’m sending you to this school for six months.”

Gonzalez said his time at the institute was stressful because he knew that if he didn’t master the English language in the allotted time, he wouldn’t be able to start his career in the military.

“It was a little difficult for me to learn the language, and I was a little scared of being that guy coming home, but I did it,” said Staff Sergeant . “I was one of those guys with the highest scores in my group.”

Gonzalez passed the language test in his fourth month at the institute, completed basic training in Fort Jackson, South Carolina, and learned his trade as a 92L, or petroleum lab specialist, at Fort Lee. , Virginia.

Serve as an educator

The staff sergeant also smiles as he reflects on what turned out to be a nine-year career in the military, and he said he was delighted to be re-enlisting for another six years within weeks. future.

“I discovered that the military had a lot of good things,” Gonzalez said. “It can show you a lot of discipline, you’re going to meet some really good people, and you’re going to get a lot of great tools to become a better person.”

He added that the service was not without difficulties as some soldiers treated him differently due to his background and the fact that English is his second language.

“No matter where you go, some people think you’re out of the band,” Gonzalez said. “You’re going to feel like they’re trying to push you into the corner, and it’s a bit difficult when that happens. [because] you don’t have the same opportunities that the other guy is going to have because you don’t have the [same] to help.”

The staff sergeant said he used these opportunities as motivation to excel.

“I will prove to you that I can do better than you think; I’m not going to allow you to put me down and make me feel unworthy,” Gonzalez said. “I know I can do it, so I have every chance to be a better person, to be a better soldier and to keep moving forward.”

The master sergeant said becoming a non-commissioned officer gave him the opportunity to put on his educator hat. He spent a third of his career as an instructor at the Basic Leader Course at Fort Stewart, Georgia.

“I absolutely loved it, it’s kind of the best of both worlds,” Gonzalez said. “I was teaching – I was doing what I love – but I was also always in uniform.

“You are an instructor, but you also try to make people think differently, not only about the army but also about their lives,” the master sergeant continued. “How can you use the military and all the tools the military is going to give you to have a better life, not just for you, but for your family.”

Gonzalez said he is also grateful to the military for the quality of life it has been able to provide for his 15-year-old son, Omariel, who resides in Puerto Rico.

“Everyone knows I really miss him; it’s hard being here right now, but it’s part of the military,” the staff sergeant said. “But that’s also why I’m here, so I can give him everything I’ve never had before.”

Gonzalez said he is looking forward to redeploying and returning home to visit his son, where they will enjoy running together and spending some quality time.

“When I first saw this kid, I took him in my hands and promised myself that I was going to take care of him, that I was going to be there for him, and it’s not working. ” Either way, I was going to be the best dad I could be,” the staff sergeant said. “It’s a bit difficult because we are here in Kuwait at the moment, but even with the distance, I try to call him every day to see how he is doing in school and maintain this communication between father and son.”

This work, Why I serve: “It’s the best of both worlds”, through SFC Mary Katzenberger, identified by DVD, must follow the restrictions listed at https://www.dvidshub.net/about/copyright.