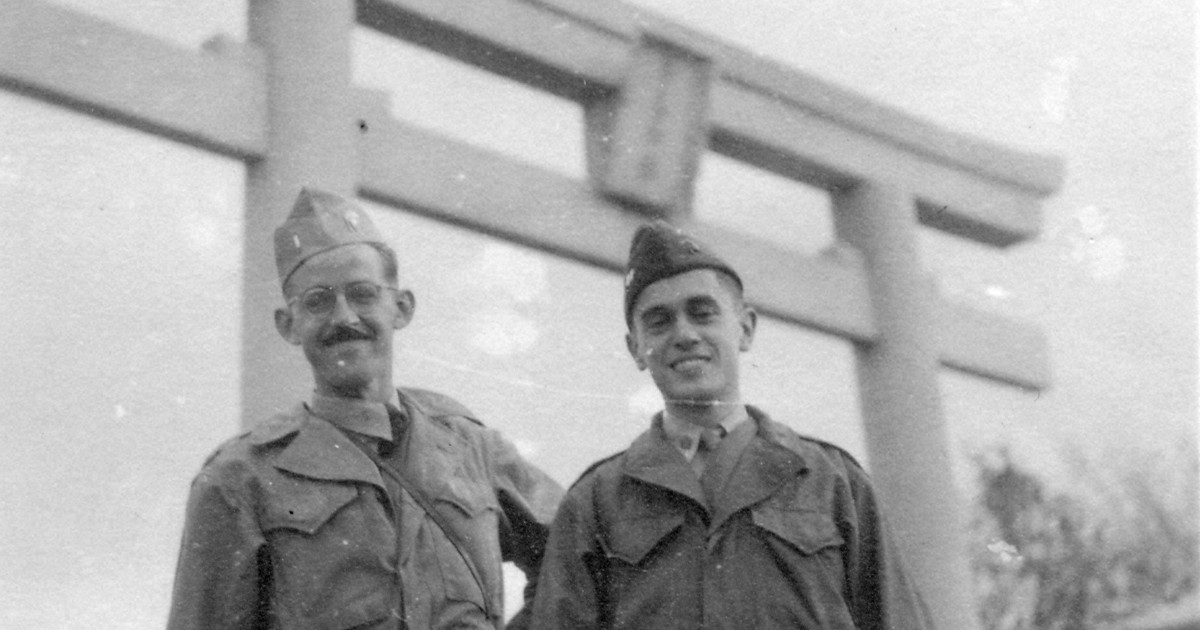 TOKYO — Donald Keene was in Guam when he listened to Emperor Hirohito’s broadcast on August 15, 1945, announcing Japan’s surrender. After the end of World War II, he was sent to China as part of the Allied occupation policy.

Keene came so close to fulfilling his wish to set foot on the Japanese mainland, but was blocked by a superior with whom he was on bad terms. He was instead sent to China. However, he had originally encountered Chinese culture before that of Japan, and had experience learning Chinese characters with his college friend. He had a strong interest in Asia as a whole, so his time in China was enjoyable in its own way.

In the distance, I could see the silhouettes of the mountains. China! I stared at the shore, unable to believe that my dream of years had come true.

Keene was truly delighted. He arrived and stayed in the port city of Tsingtao in October 1945. He apparently wandered around the area as a young boy full of curiosity and enthusiasm, as recounted in his autobiography below.

After a while I got off the ricksha and walked around the streets. I was the object of great attention, but I felt no fear or even the feeling of being in a strange place. A young Chinese officer who spoke some English joined me and offered to take me shopping. I had heard from friends sent to Tokyo that the shops were so empty and the basic necessities so scarce that you could exchange a packet of cigarettes for a work of art; but here in Tsingtao there was a sprawling abundance along the streets – food of all kinds being sliced ​​and weighed, boxes of tea, cigarettes, clothes, brushes, inkstones, pottery . With the help of my friend, I bought a jade ring, a Chinese dress, and Chinese shoes. “All Chinese now except the face!” he said laughing.

However, such carefree fun was short-lived. Keene was assigned to investigate Japanese military war crimes on the Chinese mainland. Keene did not join the United States Navy to participate in combat and had no interest in combat or the brutal events that resulted. The more he delved into it, the more he heard about the evil acts committed by Japanese troops in China. He had had enough, wondering why he had to expose such cruel realities long after the war was over.

Keene then asked to be discharged from the army. Although he was offered a week-long trip to Beijing if he stayed another month, he also declined and decided to return to the United States. However, this offer appears to have been one he very reluctantly rejected, and felt regret, as written in his autobiography.

When I look back on the decision now, I regret it. Beijing in the late fall of 1945 wouldn’t have been at its best, but it certainly would have looked more like the Beijing of my dreams than it did when I finally visited the city six or seven years ago. year. My friends who knew the town before 1945 and have seen it in recent years are unanimous in thinking that the charm of the old town has been destroyed. There’s still plenty to see, of course, and I’m glad I was able to finally get there, but I was appalled at the wide avenues that had been brutally carved through the old town and the grayness of the remaining houses.

Keene visited Beijing in October 1980 when he was invited to give a lecture on “Special Qualities of Japanese Literature”. He apparently stayed there for six days. Three years later, he went on a tour to visit places along the Silk Road, including the Xinjiang Uyghur Autonomous Region and Dunhuang. It is perhaps natural that Keene, who had an interest in Chinese characters and Eastern culture, wanted to see Beijing back then before it experienced great changes.

Keene later stated in various interviews that the reason he was able to master Japanese was because he knew Chinese characters first. In one of his Japanese books, he writes, “Before studying Japanese, I knew some kanji characters from studying Chinese…I think it was good that I memorized the kanji from the beginning.. In American universities, the method of teaching with text in Romanized Japanese at the beginning, and introducing kanji for the first time much later, has become common, but I am against this method. It is better to learn Japanese with the kanji from the start.

The flight route back to Keene’s original command in Hawaii from Shanghai passed through Japan. Keene takes advantage of this and goes against his division’s orders by telling a white lie.

My orders simply read, “You will revert to your original order”, without specifying where that might be. I decided that when I arrived in Japan, I would inform the US military that my original command was now at Yokosuka Naval Base, thinking they wouldn’t be too suspicious now that the war was over.

As the plane approached Japan, I strained to get a first glimpse of the country that had been on my mind almost every minute for the past four years. Suddenly we were over Japan, I don’t know where. My first impression was that of the greenery of the country. In China the only trees were practically those planted around Japanese shrines, but here the mountains were covered with trees, and where there were no trees there were carefully cultivated fields.

When the plane landed in Atsugi, I was so excited to be in Japan that I stuttered when asked to show my orders and explain my presence. But, of course, nobody was interested in me, and soon after, I was on a military bus bound for Tokyo. Finally Japan!

It was in mid-December 1945 that Keene was finally able to set foot on Japanese soil.

(This is part 9 of a series. The next “Donald Keene’s Japan” story will be published on July 19.)

The original text of Donald Keene’s autobiographies is used with permission from the Donald Keene Memorial Foundation. The foundation’s website can be accessed at: https://www.donaldkeene.org/

Donald Keene was born on June 18, 1922 in Brooklyn, New York. He was a scholar of Japanese literature and professor emeritus at Columbia University. After earning postgraduate degrees at Columbia University and Cambridge University, he received a scholarship to study at Kyoto University in 1953. Keene developed friendships with prominent Japanese authors, including Junichiro Tanizaki, Yasunari Kawabata and Yukio Mishima. Over the course of half a century, Keene traveled back and forth between the United States and Japan and continued to study Japanese literature and culture, while imparting their charms to the world in English. His major works include a multi-volume history of Japanese literature, “The Travelers of a Century” and “The Emperor of Japan: Meiji and His World, 1852-1912”. In 2008, Keene received the Order of Culture from the Japanese government. The researcher was granted Japanese citizenship within a year of the 2011 Great East Japan earthquake and tsunami. He died on February 24, 2019, aged 96.