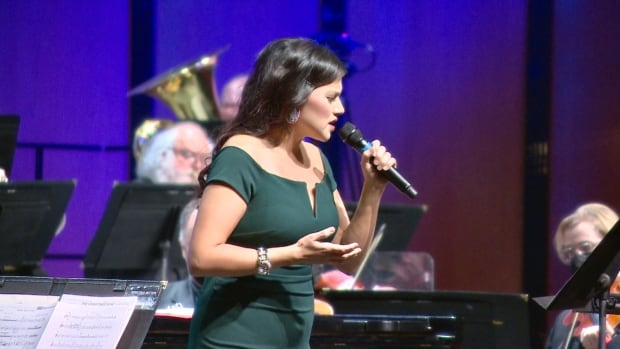 Falynn Baptiste always loved Christmas concerts when she grew up in the Cree Nation of Red Pheasant, 150 kilometers northwest of Saskatoon.

The Cree-Métis child, who was known for his powerful bagpipes, was only six when she donned a purple dress and sang her first solo – a Cree Christmas carol – at her school concert.

“People were like, ‘Oh Falynn, can you sing?’ and I was always excited and ready to take the stage and, not so much to be seen, but to share music and be heard, “she said.

Thirty-two years later, the recording artist took center stage in a long green dress and sang What child is this? in Cree with the Saskatoon Symphony Orchestra during their Christmas concert.

At that moment, Baptiste felt that she had come full circle.

“I am very, very proud,” she said. “Going maybe from a time when I was not proud of who I was to now… Showcasing our beautiful language is an accomplishment.”

Baptiste, now 38, grew up surrounded by family members who spoke Cree as their mother tongue and could sing Cree church hymns. However, she learned English in school and lost interest in the traditional language as a teenager. She had to take the bus off the reserve to attend junior high school in the town of North Battleford, Saskatchewan.

“It was quite shocking. It was so clear as a 12 year old girl that ‘Okay whoever you are is wrong so we have to change who you are to fit in’,” he said. she declared.

She changed the way she spoke, acted, dressed and who she spent time with.

Years later, as she struggled with her sense of identity in her late twenties, she realized that “my culture, my spirituality, my language, my family was the link for me. make me feel complete ”.

At 30, the teacher returned to the education program at the University of Saskatchewan to obtain a certificate in the Aboriginal language.

She has become a champion of the Cree language both on stage and in the classroom.

Today, she teaches at the miyo machihowin academy – an Indigenous wellness program that integrates language and culture – at ED Feehan Catholic High School in Saskatoon.

One of her grade 12 students, Isabelle Robin, a teenager from Beardy’s Cree Nation and Okemasis, said learning about the dark history of residential schools motivated her to learn the language.

“I am learning for kids who have never learned their language and who weren’t allowed to learn or speak it,” Robin said.

Baptiste is excited to help Indigenous teens take pride in their culture at the time in their lives when she has lost her own connection.

At home, Baptiste began working on Cree translations for Christmas carols that had not yet been translated. She enlisted the help of Solomon Ratt, a Cree language teacher at the First Nations University of Canada, to translate the lyrics into Cree, then Baptiste fine-tuned the lyrics to match the melody.

In 2020, she released an album titled A Christmas cry with eight songs such as Oh holy night, Silent night, and Rudolph the Red Nosed Reindeer.

Earlier this year, she was going to produce an album of religious songs. But, she stopped the project after the discovery of unidentified remains in former denominational boarding schools in Canada.

“Now was not the time because we were all facing our realities… with struggles, loss and grief,” she said. “And so I stopped the project completely and thought, ‘No, now is not the time for that. “

She doesn’t feel the same about screaming Christmas carols.

Baptiste said Christmas is a time to celebrate Creator, community and culture.

And, as she did with the symphony orchestra behind her, a time to stand up straight.

As Baptiste told the crowd, “I wish you all a very, merry Christmas and blessings to all of you.”