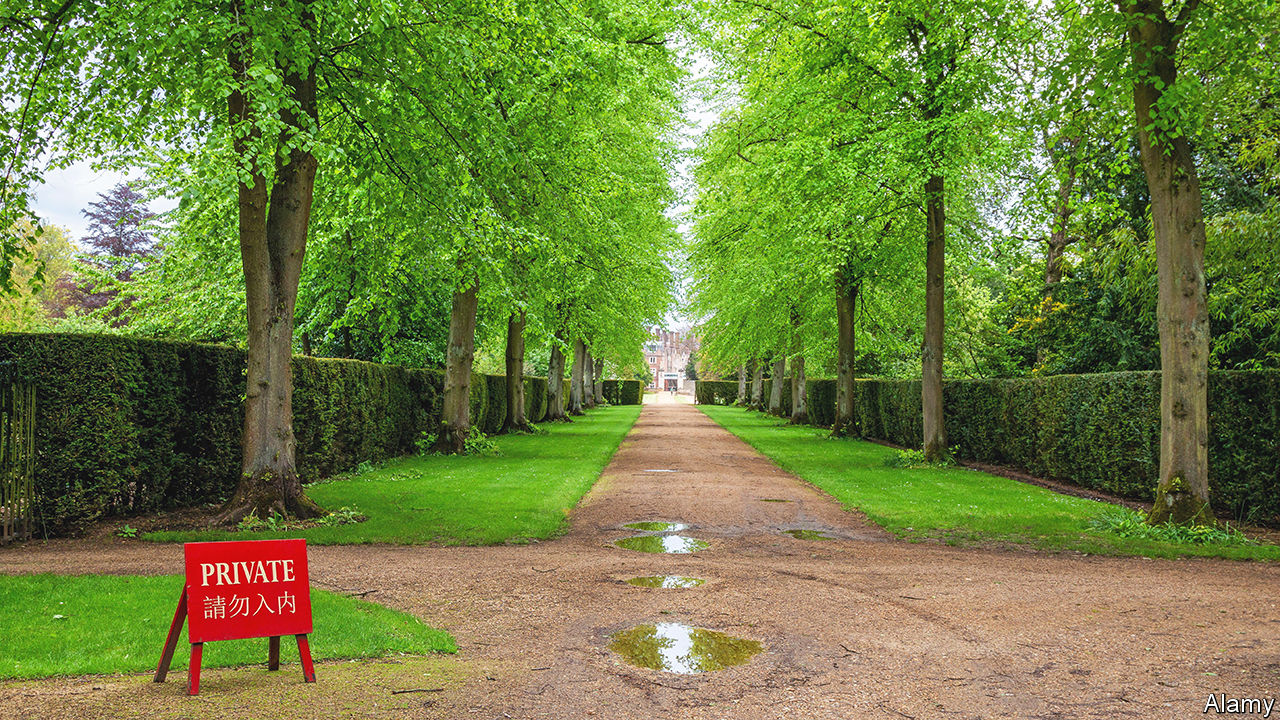 SPARTICIPATING STUDENTS The University of Liverpool can study at an affiliated campus near Shanghai. The University of Manchester has research links with nine Chinese universities and is home to Britain’s second Confucius Institute, a language school and a cultural center funded by the Chinese government. At least 15% of students at the two universities – as well as Glasgow and Sheffield, also members of the elite Russell Group – are Chinese students.

In recent years, Britain has relied on Chinese students. More than 140,000 are enrolled in undergraduate or postgraduate courses, up 50% from five years ago. They represent a third of non- EU international students at all universities, and around £2.5 billion ($3.3 billion) of the £7 billion in tuition fees these students pay each year. This represents about 6% of total university income. And Britain has managed to retain its overseas students during the covid-19 pandemic, with a drop in international first-year enrollments less than that seen in America or Australia.

This source of income has become increasingly important for UK universities. They rely on foreign student fees, which are much higher than local student fees, to subsidize everything else. Public spending per university student has stagnated in recent years and last month the Department for Education announced that tuition fees for home students would be frozen for the next two years. A 2021 report co-authored by King’s College London and Harvard University estimated that in 2018 education exports were worth around £23.3 billion to Britain, two-thirds of which were attributable to higher education. For comparison, financial services were worth £20 billion.

In 2015, under David Cameron, the Tories declared a “golden decade” for Sino-British relations. Britain would become the Western country most open to Chinese investment. But as China under Xi Jinping has grown increasingly authoritarian, they have begun to fear that Chinese students and money will come at the expense of free speech on campuses.

Academics say Chinese state tentacles penetrating Britain are trying to stifle discussion of sensitive topics such as Tiananmen, Tibet and Taiwan. Some Confucius Centers have expanded their mandate from cultural activities to protecting China’s reputation overseas. In 2019, scholars at the University of Nottingham, which has a Confucius Institute and a campus near Shanghai, canceled a lecturer from Taiwan, reportedly after complaints from Chinese officials. (The university denied there was a link.) The Chinese Students and Scholars Association, which is backed by the Chinese state and is intended to help newcomers to Britain settle, also interfered with speech on campus. In 2017, he organized Durham University students to barricade a building in an effort to stop an event featuring a speaker who practices Falun Gong, a spiritual movement banned in China.

Class discussions also suffer. Last year, Human Rights Watch, an international organization NGO, said Chinese students at Australian universities, who are even more dependent on their tuition fees, said they self-censored for fear that their Chinese peers would report them to the government back home. In a 2020 survey of social scientists by researchers from the universities of Exeter, Oxford and Portsmouth, two-fifths of China scholars said they self-censored when teaching students from authoritarian regimes. Oxford has arranged anonymity for students submitting papers on sensitive China-related topics.

Some academics are reluctant to push back for fear of losing funding or research opportunities. In 2000, articles co-authored with Chinese scholars accounted for 1% of all those with a British author. In 2019, this share had increased to 11%.

For university administrators, the biggest fear is that China will disable the student pipeline. After a row over whether Chris Patten, Chancellor of Oxford and the last governor of Hong Kong under British rule, could travel to Hong Kong, the university reportedly realized its status as a destination for Chinese students was in jeopardy. danger. His vice-chancellor, Louise Richardson, countered that Indian students would eagerly take their place.

The UK government and higher education associations have offered advice to prevent universities and professors from making deals that would allow sensitive research to fall into the hands of foreign governments. (A 2021 report by Civitas, a right-wing think tank, found that half of Russell Group universities had current or previous research agreements or partnerships with companies linked to the Chinese armed forces.) As of January, the UK government has the power to review contracts, including those signed by universities, that involve sharing intellectual property with foreigners.

In an attempt to increase transparency, Jesse Norman, a Conservative deputy, has proposed requiring universities to report overseas contracts over £50,000 to the Office for Students, the higher education regulator. America has a similar rule. But the proposal risks leading nowhere: it is part of a bill that has been awaiting report stage since September and has little chance of being heard in this Parliament.

In any case, such a measure could overwhelm the Student Office with irrelevant data, such as tuition fees and living expenses for international students. It also might not provide meaningful information about the true sources of funding if the universities themselves are misled or confused. In 2012, the University of Cambridge announced that a new chair in Chinese development had been endowed by a China-based foundation with no ties to the government. Two years later, it was discovered that the foundation was headed by the daughter of a former prime minister.

Greater transparency on funding would also do nothing to tackle the main cause of UK universities’ financial dependence on China: student numbers. King’s College and Harvard University report warned against placing limits on foreign or Chinese students, a plurality of whom study business and management and have no interest in thwarting free speech . The government’s international education strategy advises universities to recruit students from many countries to avoid over-reliance on one country.

For some, this advice came a little late. India, the country that sends the second highest number of students to Britain – 85,000 this year – accounts for a fraction of the Chinese figures. Chinese influence is manageable on campuses as long as administrators and scholars uphold academic independence, says Steve Tsang of the China Institute at the School of Oriental and African Studies in London. But for universities that lack Oxford’s deep pockets and global prestige, firmness may already have become too risky. ■