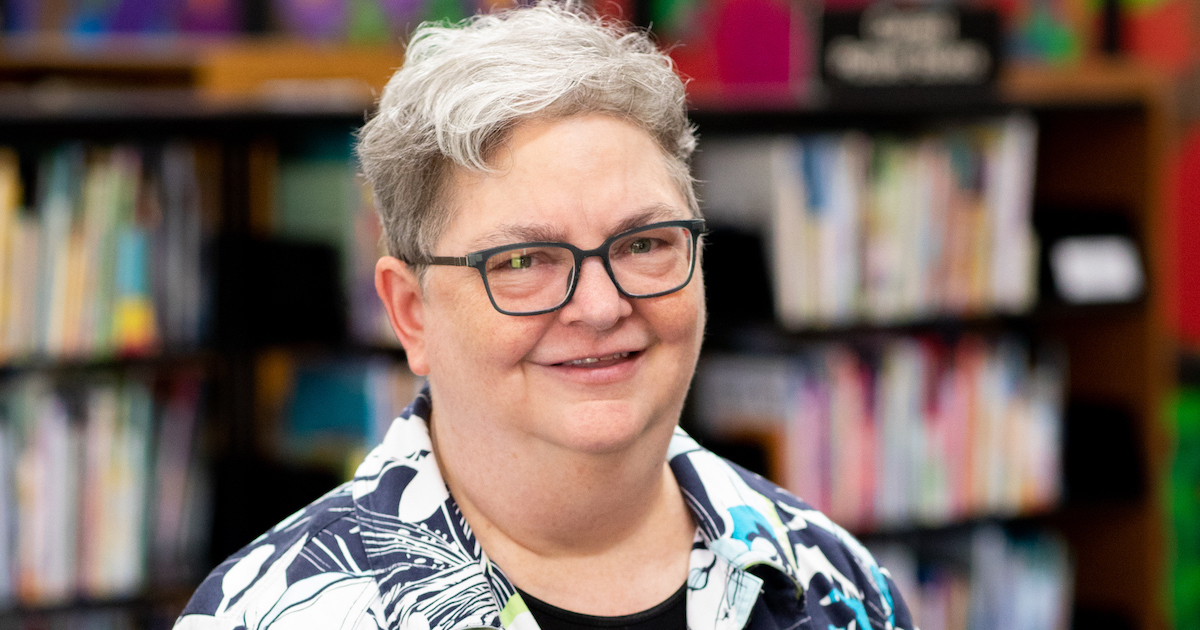 As an undergraduate linguistics student at UW-Madison in the late 1970s, Kathleen T. Horning found herself at a crossroads—and took a chance turn at the Cooperative Children’s Book Center ( CCBC).

As Horning recalls the situation, she liked linguistics but not her job prospects. So she decided to pursue a certification to be able to teach English as a second language.

“You could pretty much go anywhere in the world and make a living – and that got me excited,” says Horning, who started taking a series of five courses to be able to teach English as a second language.

One of these classes met on the fourth floor of the Helen C. White Hall, which at the time housed the CCBC.

“One day I came to class early and walked over to CCBC,” says Horning, who chatted with a librarian, joined the center’s monthly book discussion group, and quickly felt at home. with the library staff. “I found that I really liked children’s books and I loved being with this group who were serious about these books”

Horning adds, “I started to realize that it was something I could do after I graduated and I could go to library school and spend my life doing it.”

The loss of linguistics was a major victory for the CCBC in particular, and for the field of children’s and young adult literature more broadly. Horning began working at CCBC as an undergraduate volunteer in 1979, learned and grew under the mentorship of director emeritus Ginny Moore Kruse, and took over as director of the center in 2002.

A remarkable career that spanned six decades ended on July 1, when Horning retired from college.

“Not many people are lucky enough to find the place where they can grow professionally and personally so early in their career,” says Horning, known to friends and colleagues as KT.

Perhaps nothing better illustrates Horning’s contributions and his rock star status in the field than a glowing article that appeared in the School Library Journal in July 2009. The bold headline simply reads: “KT the Magnificent — with a caption explaining, “Kathleen T. Horning is one of the most influential librarians you’ll meet — and one of the kindest.”

In honor of Horning and his many accomplishments, the Milkey Family Foundation made a principal gift to establish the position of K. T. Horning’s director for the Cooperative Children’s Book Center. As part of this support, the Milkey Family Foundation currently matches all donations up to $500,000 to establish this endowed trustee position. (Learn more and make a gift today!)

Housed administratively in the School of Education and also supported by the Wisconsin Department of Public Instruction, CCBC serves as a resource for Wisconsin schools, teachers, librarians, and others interested in children’s literature. and young adults. The centre’s team of librarians, which currently includes Merri Lindgren, Megan Schliesman and Madeline Tyner, work to: provide expertise in contemporary literature for children and young adults; increase diversity in children’s and young adult literature; providing intellectual freedom services to schools and public libraries; and recommend outstanding books for children and teens.

Horning says one of the efforts she’s most proud of is CCBC’s deep commitment to tracking diversity — and lack thereof — in children’s books. Beginning in the mid-1980s, Kruse and Horning began documenting the paucity of children’s and teen books written by and about people of color.

“It’s important that children can see themselves in the books they read,” says Horning.

Since 1985, CCBC has been the national source for annual statistics on diversity in children’s books. There were about 2,500 new books published for children in 1985 – and of these, only 18 were published by African-American authors and illustrators. Over time the numbers have slowly increased – with bigger jumps in positive changes around 2015 and again in 2020.

At first, these diversity statistics were conveyed in a simple statement in front of the annual “CCBC Choices” – a list of the best of the year created each year by the center’s librarians. But over time, publishers, librarians and teachers started taking notice of the numbers, as did publishers and mainstream media. Today, CCBC responds to around 100 media and research inquiries a year about its diversity statistics and the center hosts a webpage dedicated to a range of diversity resources.

“It’s a part of the job that I’m most proud of,” says Horning. “We established CCBC as an advocate for diversity in children’s books. Our diversity work has had an impact on children’s book publishing that ultimately leads to more diverse books in the hands of children and teens.

Horning is also recognized as an expert on the history of the Newbery and Caldecott Medals, which respectively honor the author and artist of America’s most distinguished children’s books. For the past 15 years, she has taught popular online courses for teachers and librarians on the history of these awards.

“I think it is essential for anyone using the Newbery and Caldecott Medal books with children to understand the history, context and process of how and why they were selected. My goal is to get people to think critically about past winners,” says Horning.

Other major Horning achievements include:

• Publication in 1997 of the book “From Cover to Cover: Evaluating and Reviewing Books for Children”. This book is now in its second edition (HarperCollins, 2010) and is widely used as a foundation textbook in children’s literature classes.

• Be named a 2010 May Hill Arbuthnot Lecturer, an honor shared by such personalities as Fritz Eichenberg, Ursula LeGuin and Maurice Sendak. Horning’s lecture, titled “Can Children’s Books Save the World?” Early Advocates for Diversity in Children’s Books and Libraries,” was delivered in Riverside, California.

• Under Horning’s leadership, in 2014 CCBC moved its physical location from Helen C. White Hall to the Teacher Training Building.

“The move gave us the opportunity to reevaluate our book collections and really put ourselves at the center of the School of Education and its teacher education students,” says Horning. “It’s so much easier to bump into and meet our education students.

• And in 1997, Horning worked with Kruse to create the Charlotte Zolotow Prize and Lecture. Zolotow was a longtime distinguished children’s book publisher with Harper Junior Books and author of over 65 picture books. Zolotow attended the University of Wisconsin on a writing scholarship from 1933 to 1936, where she studied under Professor Helen C. White. This annual event, which celebrates its 25th anniversary this year, brings a distinguished children’s book author or illustrator to campus to give a free public lecture.

“KT is a phenomenal colleague and a wonderful human being,” says Anna Lewis, acting director of information for the School of Education and director of MERIT, of Horning’s time at CCBC. “She is one of the fiercest champions of diverse and inclusive literature for children and young adults. For 40 years, teachers, librarians, researchers – and especially children – have benefited from the wisdom, guidance and visionary work of KT. She leaves UW-Madison with a tremendous legacy and will leave CCBC in excellent shape to continue to grow its services and successes.

“I particularly enjoy the collaborative environment at CCBC under KT’s leadership,” says Schliesman. “Some of my favorite memories are of when we would meet as a team to discuss a problem or share ideas and brainstorm and something exciting would start to emerge. That doesn’t happen in a space where you’re afraid of being judged. We had a lot of laughs when we met as staff, too. Those two things speak to the tone she set as a director.

Lindgren adds, “One of the things I appreciate most about KT is their unwavering generosity in sharing their time and knowledge. I also appreciate his willingness to listen openly to dissenting opinions. Some of my favorite moments at CCBC are when the librarians discuss recently released books we are considering for “CCBC Choices”. Even when we disagree, the conversation is positive, enlightening and respectful of each other’s point of view. KT cultivates and encourages a collaborative work environment.

While Horning says she will miss her work time on campus, she adds that she is excited to see what comes next as leadership of the center is taken over by Tessa Michaelson Schmidt, who has been named CCBC’s next director. last spring.

“I hope CCBC will continue to find new and creative ways to meet future challenges to better serve our users,” said Horning.

When asked about his retirement plans, Horning simply replies, “To continue reading good books, but during the day, in natural light.”

“I have truly enjoyed being part of a highly regarded school and university, and working with and supporting so many talented faculty and staff, teachers and librarians,” says Horning. “I worked a lot with CCBC, but that was what I loved doing.”