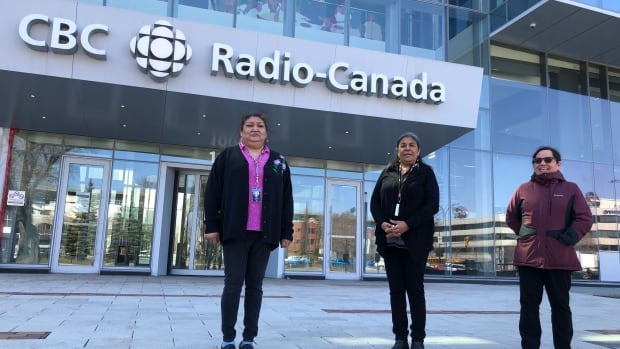 The women of CBC North’s Cree-Language Radio Montreal team won a Gracie, a prestigious award given by the Alliance Foundation for Women in Media. The Gracies recognize outstanding programming created by, for and about women on radio, television, cable and interactive media.

Betsy Longchap, Dorothy Stewart and Marjorie Kitty won in the local radio category for their many years of work on Winschgaoug and Eyou Dipajimoon, Eastern Cree-language radio programs broadcast daily Monday through Friday.

Previous Gracie winners, in other categories, include Oprah Winfrey, Michelle Obama and Catherine O’Hara, to name a few.

The following story features the three broadcasters in their own words.

I listened to Cree-language radio programs growing up in Mistissini, a Cree community in northern Quebec, located about 800 kilometers north of Montreal. It was very nice to hear the cry on the radio.

I started working with the CBC North Cree radio unit about 20 years ago.

It’s a huge honor to be awarded a Gracie for our all-female team. I think it’s important for women to be recognized in the work that we do, which can sometimes be difficult in broadcasting.

My grandparents taught me a lot about Cree culture, Cree traditions and most importantly, the Cree language. I remember spending a lot of time on the land with my grandparents hunting and fishing. I feel so lucky to know that they taught me many skills and the values ​​of the Cree culture.

I think it is important to tell the stories of our people in Cree because there is a wealth of knowledge and history in their stories. When I think of the times I have done radio interviews in Cree with many different people from Eeyou/Eenou Istchee, which is the traditional name of our territory, I feel blessed to have this opportunity over the years.

Being heard in the Cree language and in the homes of Eeyou/Eenou Istchee is a great way to maintain and strengthen the language. I am very humbled and proud to be able to use my language today and to further improve my Cree language.

In addition to their regular radio broadcasts, the women of the CBC North Cree unit are also involved in presenting special events to their audience. In February 2022, they made history, along with other native-language broadcasters, by covering the opening and closing ceremonies of the Beijing Winter Olympics in the eastern Cree, as well as some games Canadian men’s and women’s hockey. In 2019, they also launched a Cree-language podcast, called Wiih’teh.

I am a residential school survivor. I remember when I first went to residential school, I had to fly alone from Paint Hills (now Wemindji) to Moose Factory, Ontario, having already missed the flight that took most of the students .

Although exciting, it was scary as I was alone on my trip there. I was the only person as a passenger. I was six years old and going to a place I knew nothing about.

When I arrived at school I was taken to the showers to wash myself, although before I left my community my mother washed me and put me in new clothes – a green dress, stockings and new shoes.

The shower at school was very hot and they vigorously scrubbed my long hair. The smell of chlorine is a memory that still resonates with me today. During the shower, the school staff took all my new clothes and didn’t return them until the end of the school year. Unfortunately, they were too small at that time and they no longer fit me.

It has been my lifelong journey to protect and promote the Cree language.– Dorothy Stewart, host of Winschgaoug

When I was at boarding school, I was often caught talking, but I only translated for my peers who didn’t understand English. I was punished for using my Cree language.

It has been my lifelong journey to protect and promote the Cree language because even though I was often punished for using my language at residential school, they couldn’t stop me.

I would like to pay tribute to our Cree women of Eeyou Istchee. In recent decades, our women have brought changes to society.

I came to Montreal for a year about five years ago, to be with my brother Stanley Kitty who was receiving medical treatment in the city. He died before a year, but I stayed in Montreal because I applied for a job at CBC North and got hired.

I also want to thank my cousin, Gloria Kitty, who worked for CBC North in the 1970s. I remember my friends and I were playing tape recorders and pretending to be hosts and recording in the Cree language. We took whatever we could advertise at school. We made our own little stories too.

Little did I know that I would one day be a host and work for CBC North Cree radio. The use of the Cree language on the air is very unique and strong. It is very important because it symbolizes who we are.

Before working at CBC North, I was a Cree language teacher. I always took my classes on field trips to show them the traditional teachings on the land, because that’s where our language is.

The 47th Gracie Awards will take place in person this year, after going virtual for two years due to the COVID-19 pandemic. The ceremony takes place at the Beverly Wilshire Hotel in Los Angeles on May 24.