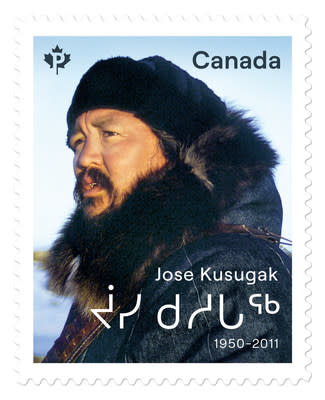 This press release can also be read in Inuktut (click here).

RANKIN INLET, NUDE, June 14, 2022 /CNW/ – At an event today at Rankin Inlet, Nunavut, Canada The Post has unveiled a new commemorative stamp recognizing the achievements of Jose Kusugak. An Inuit activist, linguist and award-winning broadcaster, Kusugak played a vital role in the efforts that led to the creation of Nunavut in 1999, for which many consider him a Father of Confederation.

This is one of three stamps that will be officially released on June 21st – National Indigenous Peoples Day – in recognition of the contributions each Indigenous leader has made to the communities they have served.

A survivor of the residential school system, Kusugak began his own career as a teacher. He worked at from the University of Saskatchewan Eskimo Language School and the Churchill Vocational Center in Manitoba, where he taught Inuktitut and Inuit history and later served as a cultural and linguistic advisor. As head of the Inuit Language Commission in the 1970s, he helped develop a standardized dual writing system for Inuktitut, using Roman spelling and syllabics.

In 1971, he joined the Inuit Tapirisat of Canada (ITC), where his natural communication skills helped him in his efforts to disseminate and explain the concept of land claims to Inuit communities. To further spread the message of land claims in the Arctic, Kusugak joined CBC North in 1980 as Regional Director for the Kivalliq Region. After 10 years with the CBC, he joined the Inuit Broadcasting Corporation, introducing new areas of Inuktitut programming.

From 1994 to 2000, Kusugak was president of Nunavut Tunngavik Inc. The organization played a pivotal role in the land claim negotiation that created Nunavutwhich has become a territory on April 1, 1999.

In 2000, he was elected President of the ITC, which later changed its name to Inuit Tapiriit Kanatami (ITK), meaning “Inuit are united in Canada. After leaving ITK in 2006, Kusugak continued to work in regional politics, negotiating on behalf of Inuit on a variety of important issues.

About the Indigenous Leaders Stamp Series

This set of stamps is the first edition of Canada Post’s new multi-year Aboriginal Leaders series.

The other two stamp unveiling events taking place this week:

Here are links to find images of the stamp and other products, our Details magazine and other resources: