Broadening the perspective of Nagekeo children through school education 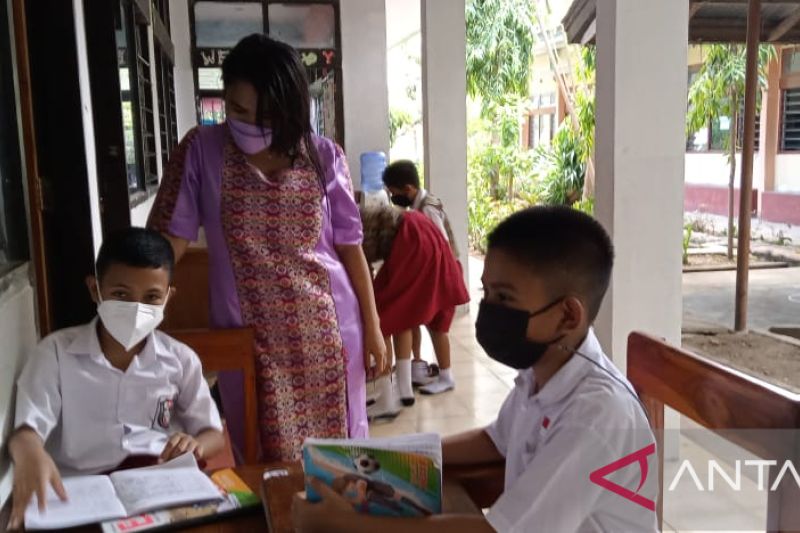 The “Merdeka Belajar” (Freedom of Learning) program of the Ministry of Education, Culture, Research and Technology has ushered in a new phase of freedom for educational institutions and educators to innovate through innovative learning approaches that respect local wisdom.

The program has also brought a breath of fresh air to educational institutions in East Nusa Tenggara province which are struggling to organize lessons for young students whose first language is not Indonesian.

Pupils living in remote areas and rarely speaking Indonesian outside of school find it difficult to follow school subjects which are taught in the language they do not understand.

According to the province’s Bureau of Education and Culture, some 1.3 million school-aged children in the province are not enrolled in any school due to several issues, primarily the language barrier.

The use of the mother tongue in the early stages of primary school, through spoken and written means, is essential for developing a foundation of literacy and instilling basic concepts that students need to understand to broaden their perspective.

Understanding the benefits of using the mother tongue as the language of instruction during classroom activities, the authority of Nagekeo district on the island of Flores, east of Nusa Tenggara, authorized the use of local languages ​​as the language of instruction in 10 primary schools in Boawae sub-district to improve students’ school experience and alleviate the problem of language barrier encountered in classroom activities.

“We have about 10 primary schools that are becoming the model for the implementation of mother tongue in school activities in the Nagekeo district,” District Chief Johanes Don Bosco Do noted in a webinar on the use of mother tongues. in class activities on Tuesday, March 8. .

Don Bosco said his administration is currently focused on increasing attendance levels at 158 ​​preschools, 180 primary schools and 62 middle schools in the district.

He called on the Nagekeo authority to make thorough preparations before allowing designated schools to switch their language of instruction to local languages. After identifying eligible schools, the authority continued the process by conducting training on teaching concepts and studying the plan for teachers and creating visual props for classroom activities to help students understand new concepts taught by their teacher.

Related News: RI calls for organizing and rebuilding the education system through the G20 EdWG

District school superintendent Petrus Buku said students’ native language is used in classroom games and songs, and each student will be provided with a study book to reinforce their studies.

“Class activities will consist of playing games and singing songs in local languages ​​that would motivate students to study. Students will also receive study books that will help them learn the alphabet,” Buku noted.

The superintendent noted that compared to schools that do not use students’ native language in classroom activities, students taught in their native language could learn to read faster.

Advantages of teaching in the students’ mother tongue

Anindito Aditomo, head of the Educational Standards, Curriculum and Assessment Agency of the Ministry of Education, Culture, Research and Technology, noted during the same webinar that some children in remote areas and underdeveloped people found it difficult to catch up with class activities if their course was conducted in the Indonesian language.

He pointed out that the classroom activity conducted in the students’ native language would have linguistic, pedagogical and psychological benefits for them. Students could understand language grammar concepts more quickly if taught in their native language.

Aditomo claimed that the mother tongue in classroom activities will serve as a gateway for students to learn written and spoken Indonesian, so that they have a good command of Indonesian and their mother tongue, as the language is taught. with words they understand.

Teachers who teach students in their mother tongue could start by honing the oral and phonetic skills of the mother tongue before moving on to subsequent teaching activities, which included learning Indonesian, suggested the head of the agency.

Related News: Teacher as Driving Forces Program to improve the quality of education

“Teachers can start with fun activities, such as observing, listening, singing, role-playing, narrating events, and telling stories delivered by the teacher,” he said. points out.

Aditomo felt that giving priority to phonetic skills will be suitable for students who are not proficient in the Indonesian language, because if their class activities are conducted only in Indonesian, the study objective will not be achieved, because they are forced to study in the language they barely understand.

Moreover, Director of Seameo Qitep in Language (SEAQIL), Luh Anik Mayani, also emphasized the importance of conducting classroom activities in the students’ native language that will benefit the students.

UNESCO has proposed to the global community to conduct classroom activities in schools in the native language of students, either through a bilingual or multilingual approach, she noted.

Mayani said that class activities conducted in students’ mother tongue will increase the level of school attendance of children, especially girls, thus enhancing children’s literacy ability in the mother tongue or second language, and helping students to focus on classroom activities and boost the quality of teaching.

According to an analysis conducted by SEAQIL in Bandung and Garut districts in West Java and Bantul and Gunung Kidul districts in Yogyakarta in 2013, some 61% of teachers admitted that students in their class have difficulty understanding subjects. taught in class. in Indonesian language due to language barrier.

Another report also revealed that 80% of teachers in West Java said that students could understand subjects better if the lesson was conducted in their native language due to limitations in their understanding of the Indonesian language, she said. added.

Teachers and the education authority must be creative in devising methods to motivate more children to attend school. The use of students’ native language at school will surely attract children, and they will begin to see school as an extension of their living spaces instead of a strange place where teachers speak a language they do not understand.