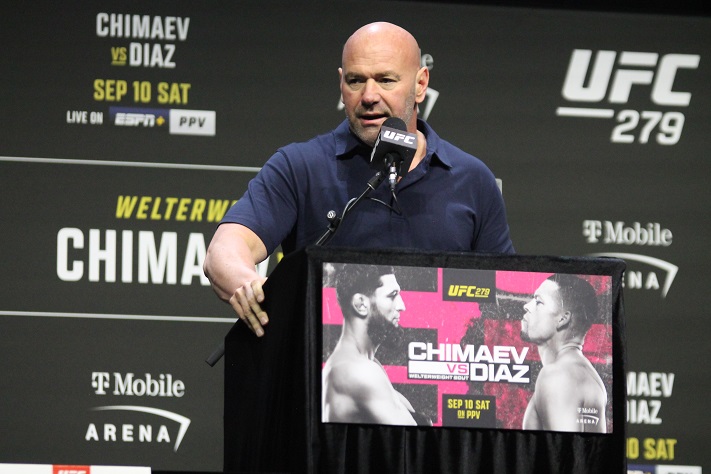 Dana White continued to expose those who cycled conspiracy theories surrounding the circumstances of the UFC 279 card shuffle – and former UFC heavyweight Brendan Schaub isn’t too happy to be pointed at the finger.

After Tuesday’s episode of Dana White’s Contender series, the UFC president has gone all-in on Pat Militech, believing him to be the source of rumors suggesting the UFC staged a press conference brawl (and, supposedly, Khamzat Chimaev missed weight last Friday) . White was later informed that it was Schaub who was spreading the rumors and replied “that makes sense” with a smirk after leaving Tuesday’s UFC Apex press conference.

Schaub, who continues to host The Fighter and the Kid podcast and perform as a stand-up comedian, fired back on Wednesday, issuing a statement to her verified Instagram account. The former heavyweight and ex-soccer player has staked it all on White, calling the promoter ‘a low-budget Vince McMahon’ and calling him a ‘moron’ after he took umbrage about White using similar language.

“Oh my God…here we go again,” Schaub wrote, speaking directly to White. “I was just being cool and thought you’d learn from the last time you mentioned my name and got destroyed.” Sadly, not surprised you’re a bully. Always have been. You put on designer jeans and “hip sneakers” and think you’re cool. You’re still a jerk with a frat brother vocabulary. Calling me and many people “idiot” “idiot” “fucking idiot” because we have questions about “the chaos” at UFC279? Also, no one is talking about *entry tickets*, I was referring to *pay-per-view* purchases and the *trend* of UFC 279…that you don’t release to the public, but you’ll say ‘he’s gone F*ckin big brothers!’ Sorry, we just don’t buy what you tell us after repeatedly lying, but the sheep media you choose to attend events don’t have the balls to call you.

“Just at the recent press conference you were caught lying about extra compensation for fighters. You need a reality check. You are surrounded by “Yes men”. You’re not special, you’re not original,” Schaub continued. “You’re a low-budget Vince McMahon. Every move you make is a copy of this guy’s cat. The only thing you have in common is that you’re both on steroids and you dress like assholes. Need I remind you that your origin story is a failed cardio kick boxing instructor who had two wealthy friends in high school to fund this business. Now go make a ‘cool’ video with the Nelk boys to stay relevant or have your PR team come up with a good news article to distract fans from fighters’ pay and how they should wear Rock those horrible shoes under armor and won’t see a dime. ‘Dummy.'”

To date, no evidence to show that the UFC orchestrated the events of the UFC 279 press conference, which ended in chaos after the camp of Kevin Holland, Khamzat Chimaev and Nate Diaz ended. engaged in a fight backstage, only emerged. Chimaev’s own coach, Andreas Michael, had previously confirmed Dana White’s version of events, which suggested the initial incident involved a confrontation between Chimaev and Holland.