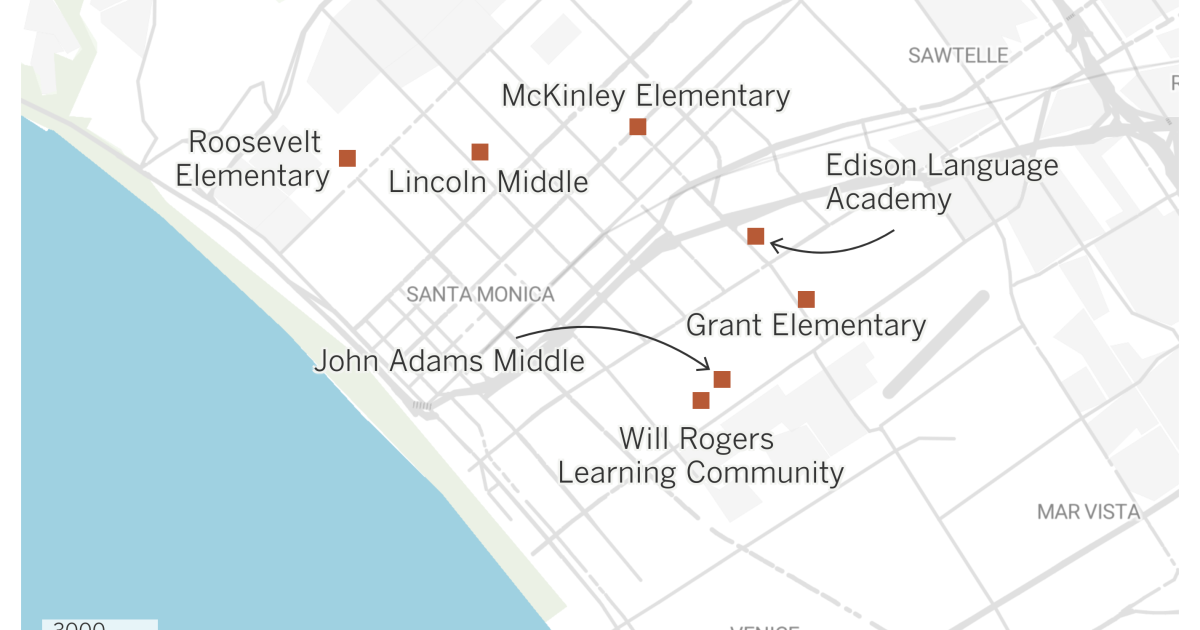 Anti-Semitic flyers that appear to link Jews to the anti-vaccine movement were discovered Thursday morning at several Santa Monica elementary and middle schools, the latest in a string of similar incidents in Los Angeles County, authorities said.

School staff members who arrived before 8 a.m. found the posters hanging on walls and signage, among other things, said Gail Pinsker, spokeswoman for the Santa Monica-Malibu Unified School District. At one school, a flyer was attached to a bin for book donations and another to an electrical unit, she said.

As of Thursday evening, district officials were aware of seven schools where the flyers had been left, a number that rose from four earlier in the day. Five were elementary schools and two were middle schools, Pinsker said.

The flyers feature what appears to be a red and green Star of David with the phrase “anti-vaxxer” written on it in white capital letters.

Santa Monica-Malibu Unified and the City of Santa Monica released a joint statement condemning the act.

“Santa Monica rejects all forms of bigotry and anti-Semitic rhetoric, intolerance, harassment and violence have no place in our schools or in our community,” the statement read. “We are deeply offended by the anti-Semitic posters, falsely and harmfully depicting the pro-vaccine propaganda found in many of our schools.”

A message on the leaflets asks people to report those who are against vaccines “because you care and they don’t” and provides a number to text.

A text message to the number, which has a Kentucky area code, says it is an “anti-vaccination hotline”, run by the organization Safer Tomorrow.

“We are a group of parents and citizens concerned about securing the future of our children,” reads the text message.

When more information is requested, an automated response indicates that the organization is “beginning to collect (but not act on) information on anti-vaxxers.” He continues: “That way we can work together on a solution as a society.”

Flyers were found at the Edison Language Academy, Will Rogers Learning Community, and McKinley, Roosevelt, and Grant elementary schools, as well as John Adams and Lincoln colleges, according to school officials. The Roosevelt posters are believed to have been posted late in the day, after school, Pinsker said in an update.

All of the posters, which had sticky backs, were removed that evening, district and city officials said.

“We collectively want to ensure that all of our students, families and staff, regardless of race, religion or other identity, feel safe and welcomed in our schools and in our community,” the district said and the city in their joint statement.

Pinsker said the district has a COVID-19 vaccination mandate for staff members and encourages students to get vaccinated, but she said those policies don’t appear to be related to the flyers.

Jordanna Gessler, vice president of education at exhibits at the Holocaust Museum LA, said the flyers associated those who oppose vaccination with Jews.

“And it’s a very old anti-Semitic trope that Jews spread diseases that the Nazis perpetuated,” Gessler said in an emailed statement. “It dates back to the Middle Ages, when Jews were blamed for the Black Death.”

Last month, flyers filled with anti-Semitic theories about the COVID-19 pandemic were found in driveways and lawns in several neighborhoods in Pasadena and Beverly Hills, according to law enforcement officials.

The flyer “contains propaganda-style hate speech related to the COVID pandemic and the Jewish people,” the Beverly Hills Police Department said in a statement. More than 200 leaflets had been collected.

The flyers mentioned a “COVID program” and named several federal health and business officials while noting that they were Jewish. “Every aspect of the COVID agenda is Jewish,” read the leaflets.

Similar flyers were distributed in other parts of the country, including Texas and North Carolina.

“Everyone, not just in Santa Monica, but all over Los Angeles and frankly around the world, should be outraged and offended by such ignorant, insidious and vicious lies created by whoever produced these posters,” Kean said in a statement.

Kean said the museum seeks to educate people about “how such actions resulted in the deaths of millions at the hands of Nazi Germany.”

She added that she expects a police investigation.

Flores said the investigation is still in its early stages and has not yet been identified as a possible hate incident.