Alumni leverage their military experience in their teaching roles 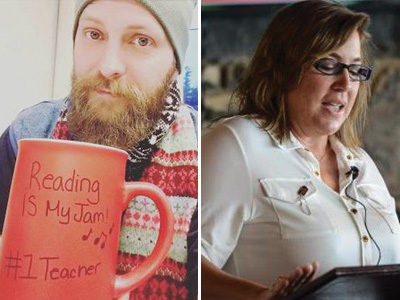 Do military veterans make good teachers? This question was posed to two former students of the School of Education – one a former US Army pilot and the other a former Air Force computer and systems technician turned linguist – who teach now in schools in upstate New York.

A narrow answer to the question might refer to giving and taking orders as the common denominator between the two careers. But the experiences of Elaina Hajduk G’04 and Bryan Dion G’17 show that military training brings so much more to the classroom, from team building and student motivation to sharing stories of global deployments that broaden the horizon.

For Hajduk, a math teacher in the Fayetteville-Manlius (NY) school district, the journey to the classroom began at the United States Military Academy. “At West Point, I was often chosen to tutor struggling students. And I was good at it,” she says. “My tutoring transformed students, and watching them grow and learn excited me. Being able to explain things in a way they understood gave me a lot of personal satisfaction.

After graduating from West Point in 1986, Hajduk attended the U.S. Army Aviation Center of Excellence at Fort Rucker, Alabama, before being stationed in Würzburg, Germany, as a chief. platoon for a platoon of UH-1H “Huey” helicopters. Three years in Europe saw her promoted to Battalion Logistics Officer, then Assistant Brigade Logistics Officer before returning to Fort Rucker to complete the Advanced Officer Course.

When Hajduk left the military as a captain in 1991, she and her husband moved across the country to work before they and their growing family — the Hajduks have four children — moved to Syracuse in 2000. This is where Elaina took up teaching again. , first as an assistant professor of mathematics at Cazenovia College. “I had struggling students at Cazenovia, but I was good at taking them beyond their math phobia,” she says, recalling how that experience inspired her to move into teaching kindergarten. in 12th grade. “I loved teaching, especially when I made an impact and a positive difference.”

Although she has always had a knack for math and for leading teams of soldiers, Hajduk admits that her training as a teacher – part of her school of education MS in Mathematics Education program — opened her eyes to different perspectives on mathematical concepts and the different difficulties students may have with them. To this day, these perspectives help him adjust his approach to suit the student. “One of my teachers called it ‘making education good for all children’.”

Hajduk also recalls the teaching methods that teachers such as Helen Doer, Gerald Mager and Joanna Masingila used, such as modeling student engagement and collaboration. “We did the classroom activities and assignments so we could visualize what a classroom looks like. It was the best way to learn,” she observes.

Ultimately, Hajduk says his experience training soldiers — which dates back to West Point — is very similar to teaching. “The qualities of a platoon leader are completely similar. In the army, I trained soldiers all the time. Now I train students to study, work in groups and verbalize thought.

Specifically, Hajduk points to leadership, building trust, and fostering teamwork as three skills that are directly transferable from the military to school. “As a platoon leader, you need your platoon to work towards a common goal. In a classroom, we work as a team towards the common goal of learning,” she explains. “A good leader has a connection with his soldiers, and having that personal connection means he knew I cared about them. Today, my students know that I care about their interests, the sports they play and their families.

knowledge of the world 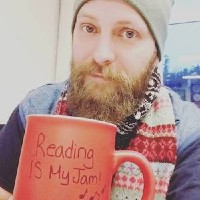 For Dion, the main benefit of being a military veteran turned high school teacher is his “ridiculously broad perspective and cultural experience.”

Through his service in the Air Force, Dion has lived and worked in the United States, Europe, Asia and the Middle East. This path provides diverse perspectives for her Grade 10 English Language Arts students at Monticello (NY) High School. “I constantly share knowledge of the world with my students, whenever I get the chance. Whether it’s identifying kindreds, telling stories of deployment, or simply sharing foreign concepts.”

When it comes to the disciplinary aspect of his military experience, Dion admits that he “diverted most of the balance” one would expect of a veteran. ” I am clumsy. I laugh with the children. But even though I try not to, I lead when the need arises,” he says.

Dion has followed a winding and fascinating path throughout his service. Enlisted shortly before graduating from high school in 1996, after basic training he became an airfield systems technician, maintaining weather and navigation systems.

After his first overseas station – at Kadena Air Base, Okinawa, Japan – Dion moved to Biloxi, Mississippi, to retrain as a network administrator before heading north to Grand Forks, Japan. North Dakota, as the “computer guy”. In 2003, Dion was again sent overseas, on special assignment to Ramstein Air Base in Germany.

From Germany, he was back in the United States as a network administrator at the Air Force Research Laboratories in Rome, New York, before an overseas deployment to Al Udeid Air Base in Qatar. . It was then that Dion was struck by the idea of ​​another career move.

“I saw and heard Arabic as I traveled the country, but I didn’t understand it.” Nonetheless, the language and culture fascinated Dion, and after passing the Defense Language Institute’s Basic Arabic course, he applied to become a linguist. “The Air Force sent me to Monterey, California to learn Arabic,” he recalls. “I thought that learning a difficult language would make me travel and I would be deployed again as a linguist. Instead, I was posted to Fort Meade, outside of Baltimore, Maryland, for the last eight years of my career.

It was during this last act that Dion’s thoughts turned to teaching. “I had accumulated a lot of undergraduate credits and was involved in many training programs for young men and women in the Air Force. I realized that I love helping others improve. My daughters were also young and I was always creating “teaching moments” while raising them. It was natural.

The benefits of the Post-9/11 GI Bill gave Dion the final push he needed. “It covered three years of tuition and helped pay my rent, so I used just one year to go to Syracuse and gave the rest of the benefits to my daughters.”

Dion’s Strongest Memories MS in English Education program are from its professors, such as the acting dean Kelly ChandlerOlcott (“She has this welcoming, intelligent, yet frank and caring energy about her”) and Associate Provost Marcelle Haddix (“I try to take into account his reaction whenever I’m confronted with cultural questions”). With his Air Force background and long beard, Dion has a “cool English teacher” vibe, so part-time instructor Keith Newvine’s words also stuck. “Keith taught me that we can be cool teachers, but we should always be compassionate and open to alternative understandings for whatever we might think is already crystal clear.”

Both Dion and Hajduk have discovered how their military career enriches their teaching. Offering advice to young veterans considering their own post-service careers, Hajduk observes that the confidence and responsibility the military instills in young people are among the skills a veteran should assess when considering a change. .

“When I was 22, I was leading 13 helicopters and 25 soldiers, some a bit older than me,” Hajduk explains. “That management ability, that maturity and that leadership – there’s nothing like it in the civilian world for someone that age.”

She urges veterans never to sell themselves short, regardless of their next move. “Your skills are the ones employers are looking for the most,” adds Hajduk. “The greatest fear of military veterans is whether their military skills will transfer to the civilian world. I say, take an inventory of the skills you learned in the military and really think about how they transfer.

Learn more about the School of Education master’s programs or contact the Associate Director of Admissions and Graduate Recruitment Speranza Migliore at [email protected] or 315.443.2505.